Mobile games have been a popular way to pass the time. Many people spend countless amount of time playing several mobile games. Different people like different games, and if you like to find some objects while playing a game, you are on the right page. If you are one of them and you want to try some of the best hidden object games for Android, you can check out this list. For your information, some games and paid and have some in-app purchases so that you can unlock all the features and packages included in the games.

Everyone has heard of this action-packed Android game called PUBG. PUBG is one of the best games where you need to find some hidden packages given to you. If you cannot find those hidden packages from some buildings, you won’t be able to do anything or win the match. No matter whether you are playing alone or in a group of known people, you must have to find those objects that contain weapons and you can use them to destroy your enemies. PUBG has a lite edition, but this is recommended to install the original version. Talking about the compatibility, you should have Android 4.3 or later versions. You do not need to spend any money to download this game from Google Play Store, but you may need to purchase some packages to unlock everything. Download

2] Murder in the Alps

Murder in the Alps is a great mystery novel and has been developed based on the novel only. According to the novel and the game you are detective needs to solve a murder mystery that has taken place in a hotel in the Alps. As a detective, you need to solve various puzzles to get to the murderer and solve the mystery. The user interface of this game is very good, and you do not need a high-end mobile device to install it from the Google Play Store. Talking about the compatibility you must have Android 4.4 later version. Like PUBG you can download it for free, but you might need to spend some money to unlock all the features and functionality. Download

You love to play the hidden object game on your Android mobile you should download and try it once in your lifetime.  this is another Android detective game that you can download on Android 4.1 and letter version for free. You need to investigate various crime scenes and solve them accordingly. The best thing about this game is that you can play with your friends so that you can solve any mystery within moments. By default, it does not show any help or hint, but you can make use of the HINT button to get started with a case. You can find radius crime scenes, including some murder mysteries. You need to get all the puzzles together to solve a case, and that is the basic thing about this game. Download

You like detective novels and movies you must have heard of Sherlock Holmes. He is the best detective character you can find in the world who solves any case analytically.  if you want to give him a try,  you should install this game called Sherlock Holmes Hidden Objects Detective Game. According to the official statement, it has more than 1000 hidden objects in radius level that you can find throughout the game. Before installing this game, you should know that you must have an open mind like Sherlock Holmes to solve any case you get at any level. You need to search for items by picture, find objects in anagrams. You need to detect differences in two scenes, and more to solve any puzzle or any mystery case. Regarding the compatibility, you must have Android 4.4.2 latest version to download it from Google Play Store at zero cost. Download 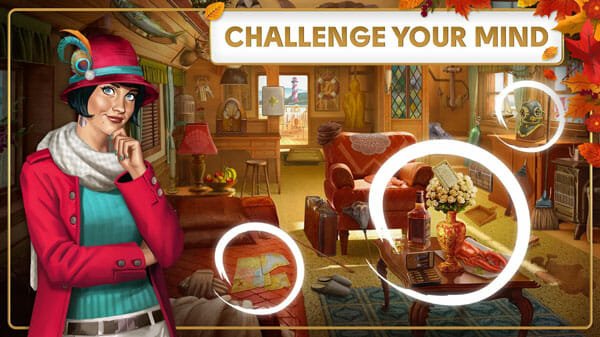 June Parker Use a girl who needs to unwell all the family Secrets by solving mysteries and finding hidden objects throughout the game. You need to live my life as a character find all the hidden objects given at various levels of this game. You will get some clues to find a piece of a puzzle in every crime mystery, but you must have to look at yourself at various things on your screen so that you can find everything and solve the mystery within minimum time. The primary goal is to look for clues and solve levels. You can create and customize your property Island so that you can get more interest in the game. This game is compatible with Android 4.4  and the newer version, and you can download it for free from Google Play Store. However, it comes with some in-app purchases. Download

6] Enigmatis 3: The Shadow of Karkhala

If you want adventure, puzzles and ancient mystery in one game you should install it called Enigmatis 3: The Shadow of Karkhala. This game has probably the best user interface among all the games mentioned on this list. It has more than 43 hard drawn locations full of hidden object scenes. On the other hand, it has 25 mini-games and puzzles included in this game. All these locations are set in the Karakorum mountains. Before installing, you should know that you can download it for Android 4.2 or later versions and you do not need to spend any money. However, you might need to buy some packages to unlock all functionalities. Download

There are more other hidden object games for Android, but these are some of the best games you can download right now on your Android mobile. I hope you will like them.