Yet Another Paypal Block For Indian Users

As you may have noticed, apart from Amit and me, some other authors are currently contributing content for this site. Some being from India, some are also from outside India as well. The problem I am going to talk about here is what I noticed a few weeks back when I was trying to post a reply to a tweet.

The story goes like this. Some guy posted a tweet about how happy he was with that day’s (USD=INR) PayPal conversion rate. I was hoping to post my frustration with a reply stating the credit card withdrawal rate which is always higher the other way i.e when you withdraw (say) USD100 to your bank, you’ll receive somewhat around INR 4400 to INR 4450. Whereas when you need to add the same amount (USD100) to your Paypal account using your credit card you’ll have to add almost INR 4550 to INR 4670. And so with the new rule that you (if Indian) cannot buy online using any amount received via Paypal, you have to withdraw the money to your bank and then again use the same with higher rates to spend online. So as I went to PayPal looking for the day’s conversion rate (INR=USD), I simply tried sending a small amount to my other PayPal account. And bang, I was suddenly seeing a message that I need to confirm my credit card first.

I was totally surprised as my card was already verified and I had already used it on several occasions to pay online with PayPal. I tried contacting PayPal and then in turn some of my blogger buddies. All but one was experiencing the same problem while paying his Indian authors. All the others were either not using Paypal to pay or simply haven’t faced such problems yet. Then came the long awaited reply from PayPal. Here is what is says, 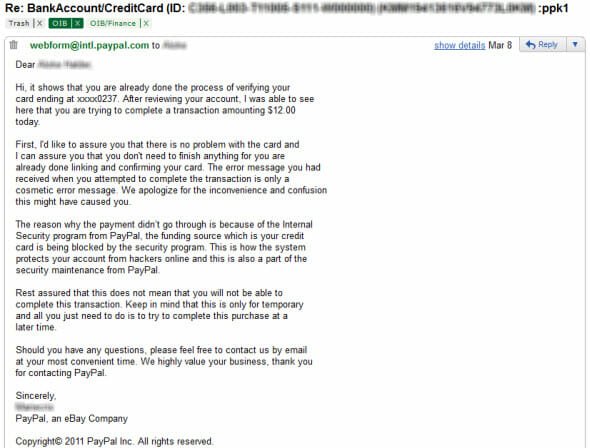 Now as it is clear from their statement that the problem was due to some temporary internal error. I waited for the problem to get solved as I was requested. Days passed and nothing changed and the payment day for all our authors as well our hosting provider was getting closer. Last night I was again checking if the problem got sorted out and it still persisted. So I tried looking out for some alternate ways to make the payment. I generated an invoice from the Amit’s PayPal account and sent it to our blog’s primary PayPal. Next what I did was eventually try to pay the invoice with my credit card linked to the blog’s primary Paypal account. And now came the moment of truth. I got the following message,

Why I didn’t realize this earlier?

Since now we were using our PayPal funds (that we received from other sources) to make any payment. After the PayPal ban (that you can’t use your received amount) effective from March 1, 2011, we started making payments with credit card. But we pay all our Indian authors by NEFT (National Electronic Fund Transfer) or via online banking portals. And as I faced the problem and was going through it, all the time I was trying to send a payment to my and then Amit’s PayPal account, both of which are Indian accounts. Now that I had figured it out, I tried sending a payment to one of our writers from outside India and it did work fine.

I think this issue has been there for quite long, apparently without getting noticed. What really pissed me off was the negligence from PayPal end. After almost a series of emails and even a pretty long survey (that I completed in desperation to solve this issue) no one even bothered to look into the matter and work it out. So once again, PayPal found a way to screw Indian users. What’s next?