How to Un-jailbreak iPhone Without Upgrading iOS

Doing Jailbreak is really easy. Just download a tool, connect your device, follow few steps and that’s it. You can jailbreak your iOS device within minutes. However, if you want to un-jailbreak or remove your jailbreak, you need to upgrade your iOS. That is the simplest method.

Jailbroken iPhone users can do so many things and some unthinkable changes, what are just impossible for non-jailbroken devices. Actually, Jailbreak helps iOS users to unlock many features those are generally blocked by Apple itself. On the other hand, this is possible to install some useful software. The most interesting thing is you will get a whole new app repository. Apart from Apple App Store, you will get some other app and game repository from where you will get loads of games for free.

But the problem is if you jailbreak your device, you will void warranty. Therefore, no matter whatever problem you face with your iPhone or other iOS device, you won’t get any official support from Apple itself since it is beyond the Apple’s T&C.

Previously, there was only one way to remove jailbreak. You need to upgrade your device from existing iOS version to higher version in order to remove that extra shield aka Jailbreak. But, now, you have one more way to remove Jailbreak.

Saurik has released a Cydia tweak that will let you un-jailbreak iPhone without upgrading iOS. This is where it excels. There may have some problems to upgrade your device. Some people just do not want to upgrade their iOS version because not all upgrades come with improvements for all. There may have some other issues as well.

If you are one of them, who is facing various settings issues, network problems etc. Here is the step you need. On the other hand, Jailbroken iPhone users cannot upgrade their devices to a newer version. They must have to un-jailbreak before trying to upgrade iOS. If you wish to upgrade your device without spending much memory, here is the solution.

Anyway, before using this tool, you ought to create backup of everything you have in your iOS device. This tweak will delete everything during un-jailbreaking process. You can backup your data using iCloud or iTunes.

After having a full backup, download Cydia Impactor from the official Cydia repository. You can also check it here. After installing this Cydia tweak in your iOS device, open it from Cydia app. You will get all the essential details about this tweak on the app page. Along with that, a button will be appeared in the bottom of the page. Just tap on delete all data and unjailbreak device button. 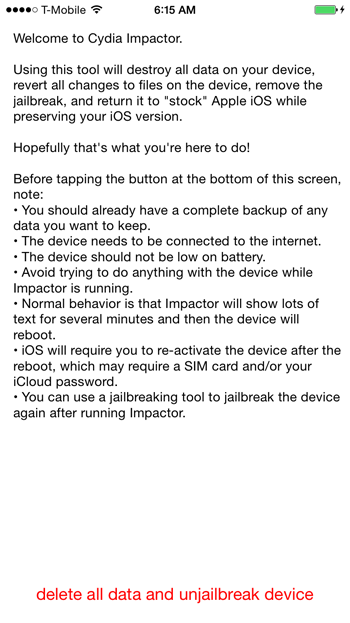 Following that, tap on the confirmation window. Right after that, you will get a screen something like the following picture, 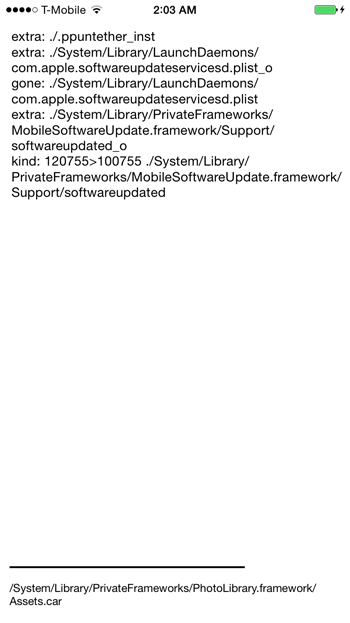 You should not tap on screen or even touch your iPhone during erasing data. It may create problems. After completing all the things, you will have to set up your iOS device as a new one. That means, you have to set language, log in to Apple ID and more others.

Apart from 6th Generation iPod Touch, Cydia Impactor works on all the other iOS devices that support iOS 8.1-8.4. Hope this tool will assist you a lot.