How to Clone App Settings in Windows 10

Although, Windows is a great operating system, yet, it shows plenty of issues at different times. For example, some people always claim that their favorite apps have stopped working suddenly and now the program is not starting anymore. It appears when someone tries to install and run an app that is not compatible with the current Windows edition. Many Windows 10 users have claimed this issue while trying to use an incompatible app. Sometime, app starts working but after a few moment, it stops working anymore. At such moment, a vast majority of users uninstall that app and re-install it. It generally solves the issue but this is a temporary solution.

In fact, this problem has no such permanent solution until or unless the developer develops the app for your Windows machine.

If you do what is mentioned above, this is confirmed that you have to enter all the details to run the app again. Although, Google Drive does create any compatibility issue, yet, take is as an example.

Let’s assume that Google Drive is not running well in your Windows 10 machine. As mentioned above, you will uninstall and re-install the Google Drive app to run it again. After re-installing, you have to enter your log in credential so that it can fetch your account data. All these things can consume a lot of time if you have 2-step verification for Gmail.

To bypass this thing, here is a software that will let you clone the app data and restore it when needed. If you use this app, you will not have to enter the log in credential to run Google Drive after re-installing it. You need to just restore the data using it.

Clone Any App Settings in Windows 10

Meet CloneApp. This is one of the best, free and portable Windows software that will let you clone app settings in Windows 10. Actually, this software is available for Windows 7, 8, 8.1 and 10. On the other hand, it comes with another restriction. Users cannot backup “any” app data. It has specific app limitations. You can use this software to clone the following software and settings,

Therefore, go to the official website of CloneApp, download it and open the app. It doesn’t require any installation since this is a portable app. After opening it, you will get a screen that looks something like the following picture, 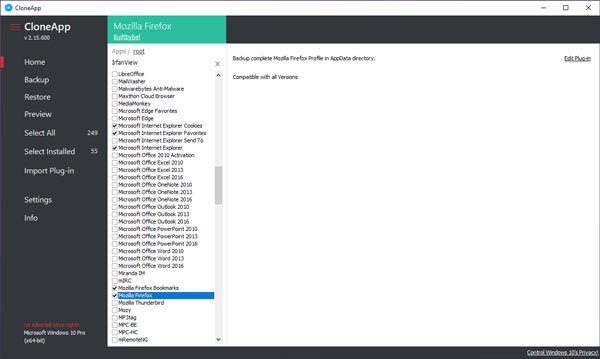 All the supported app list is on the start screen. If you want to know your installed apps, just click on the Installed button.

Apart from that, you can also get the installed and supported app list by clicking on the Select Installed button that is located under the Supported App window.

Now, you can select any app that is installed in your PC and hit the Start CloneApp button.

It will be cloned within moments. Following that, you can uninstall and re-install it with the same settings that you had.

CloneApp comes with a couple of options that will let you change the Clone Path, log path, plugin-in editor path and so on. Just click the Options button and set it according to your wish.

That’s it. Instead of entering all the log in credential or set up an app again, you can simply use CloneApp that will make everything easier and faster.