Google Pixel C vs Apple iPad Pro: Which is better?

After just 20 days of announcing Apple iPad Pro, Google has announced to launch Google Pixel C, which is a high-end Android tablet that is going to take over all the old tablets till date. Although, both are coming from two different companies, yet, there are some people, who are very confused whether they should buy Google Pixel C or Apple iPad Pro. If you are one of them, I would like to suggest you to choose whether you need Android or iOS because this particular thing makes a lot of difference.

However, if you wish to buy a tablet for daily work or office work or any other particular purpose, you should obviously check respective functions of both of them so that you can stick with one. Certainly, this is quite difficult to say whether Google Pixel C is better or vice versa because they both have great configuration and better chipset than previous tablets.

Neither Apple iPad Pro nor Google Pixel C has been released. But, some people have used them at the launch event. According to them, both are equally awesome. Nevertheless, here is a detailed comparison that is based on features aka configuration.

When you are purchasing a tablet, you should always keep it in mind that a tablet should be lighter. No matter, what is the dimension of that tablet but it must be lighter. Generally, tablets are portable. People use this device for office work mainly. Therefore, if a tablet is heavy weight, users won’t carry it for a long time. However, as of now, the weight of Google Pixel C is not unveiled. But, it will not be as light-weight as you are thinking about. As it has 10-inch height, it will be more than 1 pound. On the other hand, Apple iPad Pro is 1.54 pounds. Nevertheless, the height of Apple iPad Pro is 2inch bigger than Pixel C.

As the width and thickness of Google Pixel C has not been announced but it seems Pixel C is thicker than iPad Pro.

This is where Apple iPad Pro excels. This particular device is consisted with 12.9-inch Retina display with 265ppi pixel density. Obviously, this is just massive and in fact, it is bigger than 11-inch MacBook Air. On the other hand, Google Pixel C has 10.2inch display with 308ppi pixel density. As the screen size is smaller, the screen resolution is also smaller, as usual. Google Pixel C has a resolution of 2560 x 1800 pixels and Apple iPad Pro has a resolution of 2732 x 2048 pixels. In terms of display and screen resolution, no other tablet can beat Apple iPad Pro. 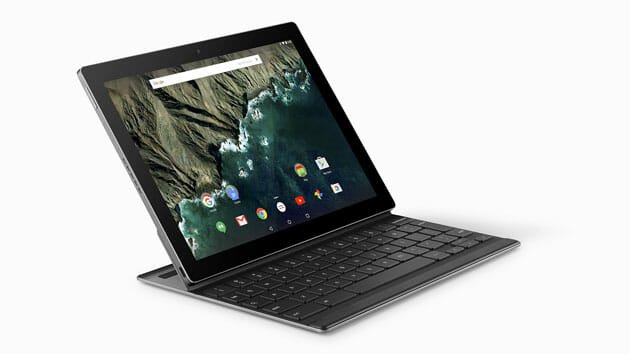 As Apple uses their native processor, you will get Apple A9X chipset, which is 2.5x faster than A8X chipset that was included in previous iPhone and iPad. On the other hand, you will get Nvidia Tegra X1 in Google Pixel C. now, if you go to compare these two chipsets, obviously, Apple’s 64-bit A9X chipset will be the winner since it comes with various important features like dynamic frequency scaling, NX bit, AES, out-of-order execution and the most important thing is it supports 64-bit OS. That will eventually make your device faster than 32-bit architecture. However, Nvidia Tegra X1 has ECC memory support, which helps users to run everything smoothly while connecting with server.

You will get M9 motion coprocessor in Apple iPad Pro. On the other hand, Maxwell desktop-class GPU is included in Google Pixel C.

Although, both of the devices come with two different variants, yet, there is a difference in RAM. Apple iPad Pro comes with 4GB RAM and Google Pixel C comes with 3GB of RAM. Obviously, 4GB RAM with Apple A9X chipset will make your device superfast and smooth.

As mentioned above, you will get 32GB and 128GB variants of Apple iPad Pro. But, a 64GB variant of Pixel C is available alongside 32GB. As they do not support memory cards, you should purchase them very carefully – after considering your purpose.

Although, the camera information has not been unveiled yet, but it seems the winner will be Apple iPad Pro. If you consider the camera of old Google devices, you can conclude this right away. Apple always provides a better camera in their new devices and this time, they are not missed. iPad Pro comes with 8MP rear camera along with a 5MP front facing camera.

The surprising thing comes here as Google Pixel C doesn’t contact any cellular connectivity. However, your will get 4G LTE and HSPA+ in Apple iPad Pro. Apart from that, you will get Wi-Fi, Bluetooth, computer sync and others in both of the devices to transfer files and do other tasks.

Here you might get confused as the battery information of Google Pixel C is not unveiled yet. However, as per some sources, this is confirmed that Google Pixel C is capable of providing 10 hours of battery backup – just like Apple iPad Pro.