Huawei To Launch Honor 5X In India This Month

The Chinese based company Huawei is set to release Honor 5X into the market, according to our sources. Honor 5X is coming out as a successor to Honor 4X which was a popular 10K device released last year. In ongoing CES, along with the popular Huawei Mate 8, Honor 5X got also some announcements regarding the release. As per those, this device going to hit US market at the end of this month. Apparently, this variant has similar specs as in Honor Play 5X, which was already announced in China last year.

The company claims that Honor 5X has faster processor, more RAM compared to Honor 4X, its predecessor. Let’s look at what it has to impress us with.

Huawei Honor 5X seems to be an affordable smartphone with some nice assets. If you consider it’s design aspects, this guy got built with Aluminium alloy metal being polished by diamonds with ceramic coating, undergoing a special design process. So, definitely it would look premium and shiny with curved edges. Coming to display, this guy has a 5.5 inch FHD (1080 x 1920 pixels) display. This FHD display would give you appropriate brightness, vivid color production, nice viewing angles and responsive touch sensitivity. Honor 5X measures 151.3×76.3×8.15 mm and weighs 158 grams in hand. It is not the thinnest device but feels lighter than most devices out there. Another asset of this device is finger print scanner to make security easy for you and which would unlock your device within 0.5 seconds, at this price bracket since there are few offering this feature. 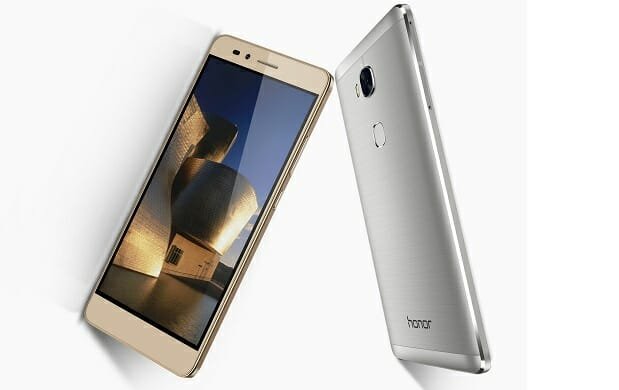 Under the hood, Huawei Honor 5X features 1.5 GHz octa core Qualcomm Snapdragon 615 SoC (MSM8939 ) coupled with Adreno 405 GPU. Having 2GB RAM and 16 GB flash storage which can be expandable up to 128 Gigs using Micro SD Card, this device runs EMUI 3.1 on top of Android Lollipop v5.1. If you look at these, you would say that there are devices offering better RAM, processor at this price bracket. Even though 16 GB phones aren’t coming out in large numbers in these days, but Heawei choose to keep it. Having storage expandability would save you if you run out of memory.

Coming to Camera section,Huawei Honor 5X packs a 13MP primary sensor with LED flash which is a Sony sensor coming with f/2.0 aperture and 28 mm wide-angle 5P lens. Even though this isn’t best camera in a smartphone, you would get decent performance with nice shots on day light and LED flash would come to rescue under low light conditions. Coming to front, this device packs a 5MP (22 mm wide-angle lens, f/2.4 aperture , 1.4 micro pixel size) on the front. This sensor would give you nice selfies with its wide angle lens as well.

Coming to Connectivity, Honor 5X is a 4G enabled dual SIM (Micro + Nano) device with GPS, Bluetooth 4.1, Wifi b/g/n and 3.5mm jack. The company promises audio quality from this device by embedding Box Speakers with smartPA audio chip. It has Compass, Proximity, Accelerometer and Ambient Light sensors enabled and has 3000mAh battery. Coming to battery life, since it has to handle a FHD screen, if you are an average user, you can expect it to last full day.

Honor 5X announced at $200 in US so which merely equals to ₹13.5 K. The missing details are expected to be announced soon.