After a quite long debate and rumours, Samsung has finally launched Galaxy A9 in China with some good improvements. Obviously, this is far better than other older A series mobiles and more specifically Galaxy A5 and A7. Previously, it was set to launch on December 1 but due to some unexpected reasons, Samsung didn’t launch it back then. However, the good news is now here as they have finally launched Samsung Galaxy A9 in China.

The design, configuration and all the things are pretty good and up to the mark. This time, Samsung has not made just another smartphone to make the users happy. Instead you will get some good features with Samsung Galaxy A9. If you are willing to know about this mobile, here you go. Here, you can find everything that you may need to know about Galaxy A9.

Samsung Galaxy A9: Specifications and Features

As mentioned before, this is the best mobile in Samsung A series. Therefore, you will certainly get a good specification here. Let’s take a look at them.

In terms of overall design of this mobile, it looks like a high end mobile. That implies, you will get a smooth body and a metallic finish. Samsung has launched this mobile in three different colors i.e. pearl white, midnight black and champagne gold. The pearl white edition and champagne gold edition look much better than the black one. This is because of the color combo and metallic edge. But, the black edition is also good when it comes to the back panel. However, you can find the traditional home button in the front side along with sensors and camera. On the back, you will get camera and flash – as usual. The dimension of this mobile is 6.37 x 3.19 x 0.29 in, which is more than usual Samsung mobiles. On the other hand, it weighs 200gms. Considering the dimension, the weight seems fine but it is little bit heavier than usual mobiles.

This time, you will get a massive 6-inch Super AMOLED capacitive touchscreen with 16M color density. The screen resolution is 1080 x 1920 pixels and the pixel density is 367PPI. Talking about the overall quality of this display, you will not have to think twice if you want to purchase a quality Samsung mobile. It would be able to produce good color. As the resolution is big, you will be able to perform various high end tasks easily. You will not get any problem with this 6-inch display. In fact, gaming and video experience will be upgrade for sure.

This is needless to mention that Samsung doesn’t compromise with the hardware. Considering the price of Samsung Galaxy A9, you will get far better hardware with this beast. Qualcomm MSM8976 Snapdragon 652 chipset in include in this mobile. Along with that, you will get Quad-Core processor with a clock speed of 1.8GHz. It will certainly make your smartphone faster. On the other hand, you will get Adreno 510 GPU. Therefore, all the high end games will not display any problem on this mobile. The most interesting thing is you will get 3GB RAM and 32GB internal storage. The microSD card is also supported that will help you to extend your storage up to 128GB. 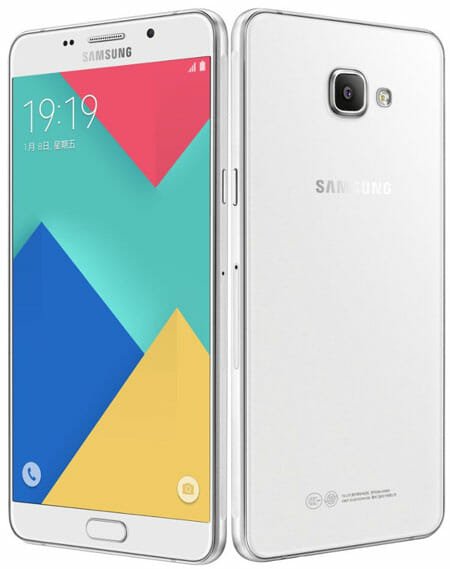 This is where Samsung mobiles come to play since the quality of camera is better than most of the other mobiles companies. Anyway, you will get 13MP rear camera with this mobile. Along with that, you will get LED flash. Talking about the features, you will get optical image stabilization, autofocus, geo tagging, touch to focus, HDR, panorama etc. Another plus point is you can record 1080p video at 30FPS using the rear camera. Nowadays, everyone takes selfie and makes video call. Therefore, you will get 8MP front camera, which is capable of recording video in 1080p.

Generally, Samsung takes care of the battery part minutely. But, in most of the time, they do not include a good battery at all. However, this time, you will get non-removable Li-Ion 4000 mAh battery in this mobile, which will certainly provide a good battery backup.

The most interesting thing is you will get fingerprint scanner. Although, this is not new in Samsung family, but it is new in Samsung Galaxy A series. On the other hand, other regular features, Wi-Fi, Bluetooth, NFC, USB port and all the others are also available with this mobile.

As of now, the price is still not disclosed. But, it is a mid-range Android smartphone. Therefore, the price won’t be too much.