Nowadays, almost nobody stores photos in an album since mobile is there to help you with this. There are many advantages of using a mobile or cloud storage to store images. First, you do not have to carry it everywhere. Wherever you have the internet, you have your images with you. Second, you do not have to get an expensive physical album since cloud storage doesn’t need that. Third, you can store as many images as you want. There is almost no limitation to store images in this digital era. However, suppose, you have a couple of real pictures of your 5th birthday or something like that, what you want to store digitally.

At such moments, you can just scan those images or capture them using this mobile to store on Google Drive or OneDrive or something like that. But, buying a scanner just to scan few images is a waste of money. On the other hand, your default camera settings may not be able to get a better picture of your old pictures. At such moments, you can head over to photo scanner apps for mobile to scan old photos and store them wherever you want. Here are some of the best photo scanner apps for Android and iOS those will let you save your images right away. 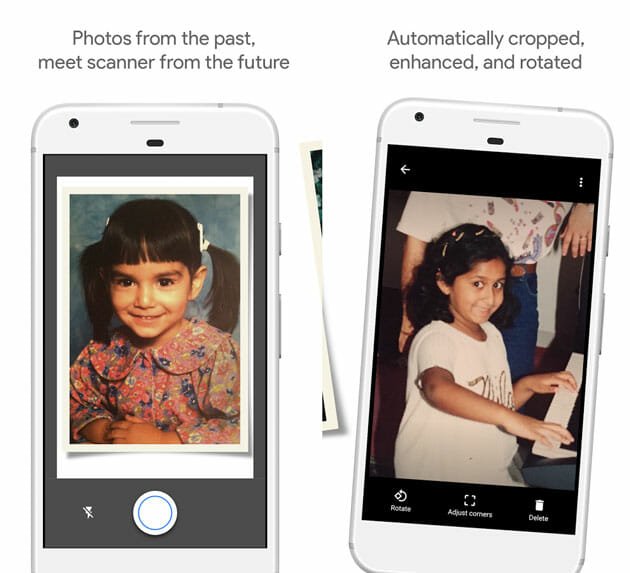 PhotoScan is probably the latest iOS app by Google that is very useful and easy to use. In this case, you would be able to scan your images and store them in standard image format. PhotoScan by Google looks neat and clean, which makes it even better. On the other hand, you have fewer options so that you can be familiarized with it quickly. The most useful feature of this app is you can remove glare that comes up when capturing an oily paper with flash. PhotoScan for Android is available for Android 5.0, or later version. If you want to install it on iOS, make sure you have iOS 8.1, or later version. To get started with this app, just open up the camera, set the image according to the screen and hit the capture button. It will take few moments to render the picture, and follow that, you would get the result right away.

CamScanner is a very popular app among them, who often scan physical documents using mobile. CamScanner can also be used to scan old photos using mobile. This app is available for Android as well as iOS. To install it on Android mobile, make sure you have Android 4.0, or later version. iOS users should have iOS 8.0 and later version. After capturing an image using the camera, you will get few options to adjust the picture. For example, you can enhance colors and much more. CamScanner is accessible for generating a high-quality image, and the same thing can be found while scanning pictures. However, not all the features of CamScanner is available for free. You must have to purchase it to unlock them all. This is also possible to share scanned images on various social networking websites or via email and instant messaging services.

Shoebox is a quite old but very useful cross-platform app to scan old images and store them in standard image formats. The best part of this app is you can organize images by tags, dates, locations, etc. While capturing an image using this app, you can enter all those things along with small description so that you can understand that in future. If you are about to install it on Android mobile, make sure you have Android 2.3 and later version. iOS users must have to run iOS 6.0 or later version. The user interface of Shoebox is not bad. Nevertheless, feature wise, this app may lack behind other two apps those are mentioned above.

There are certainly more other similar photo scanner apps for Android and iOS. However, these are the most popular and useful tools out there.