No we are not talking about that real metal as in aluminium in iPhone, or any metal at all. Metal is actually a new technology developed by Apple which they have introduced in iOS 8.

This is the second instalment of our cover up features and functionality introduced in iOS 8. If you missed the previous one,check it out here.

And today we are here to talk about gaming. Are you exited? I am, and why wouldn’t I be? I love games. Alright alright, almost everyone loves games. But do you know what Metal will do to your gaming experience? The new iOS 8 is all set to change the way you make or develop games. It brings in a lot of features that will be beneficial to developers as well as end users. Let us go through a brief context that explains what actually Metal is, what does it do, and what are the benefits of using it.

Metal is a new performance improvement to iOS 8 gaming architecture and how the games will perform on the new iOS 8. Apple have developed this technology keeping in mind the gaming capability of their A7 processor which powers their iPhone 5s, iPad Air and the Retina iPad Mini. The processor is built on top of 64-bit architecture thus making it more gaming friendly and allowing it to carry more data at once. But if it can carry more data doesn’t mean it always should.

And on that principle is Metal based on. Previously gaming in iOS was supported through OpenGL ES. Which had to do a lot of processing and translation, resulting in more overhead. But with Metal the case is now different. It is more closely bound with the processor and provides low overhead and faster computations.

Right now in iOS 7, OpenGL ES sits in between the game and the core hardware that runs it, translating function calls into graphics commands that are sent to the hardware. It creates a lot of overhead. And Apple has developed a faster way to do it. They call the new system Metal. 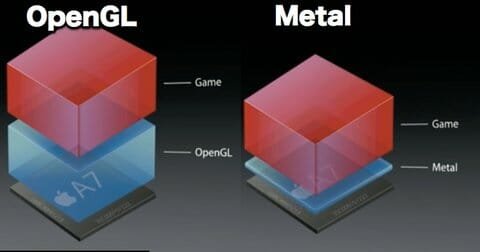 Apple senior vice president of Software Engineering Craig Federighi describes iOS 8 Metal as providing “near bare to the metal access to the power of A7.”

Federighi is talking about Apple’s own A7 processor found in the iPhone 5s, iPad Air, and iPad mini with Retina Display. The A7 include’s Apple’s second generation custom CPU, Cyclone. It’s 64-bit and based on the ARMv8 instruction set architecture.

Metal lets developers target the power of that GPU far more directly than ever before.

What does Metal do?

Metal will replace what OpenGL ES basically did in iOS 7. It will handle graphics calls and convert them before sending them to the GPU. Now since it is more closely related to the GPU, the calls will be significantly faster and more productive. Thus opening up a whole new dimension of visuals and graphics processing for the game developers. Even App developers can make use of Metal if their applications require advanced graphics.

With Metal there will be a significant improve in load time for games due to the introduction of precompiled shaders. Shaders are basically used to draw the look and feel of the game. They are responsible for drawing the game environment, colour it and fill it up with light. Since they will be precompiled now, the need of compiling them during load time will be removed, and hence resulting in faster load time. 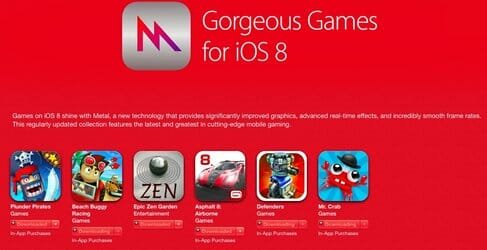 Metal will also provide developer access to the compute power of the graphics processing unit (GPU) embedded in the A7 processor. In the right hands, this could be one of the most important aspects of Metal.

Such access means that the applications can now be optimised for parallel processing. Now with parallel processing optimisation, improvement to your video, photos, audio playback many more capabilities will also be improved to a great extent.

Metal will for sure improve how games and other application will perform on your device. With increased access over the GPU and more computing capability with less overhead time, games are sure to become much more interesting and fun. But mind you, Metal will only be available to the folks with either iPhone 5s, iPad Air, iPad Mini with retina and above, other guys with iPhone 5, 5c or lower device models will not have the capability to harness the power of Metal.

This is because the Metal technology was developed keeping in mind the A7 processor by Apple. So devices with it or the A8 processor will only be able to benefit from it.

So if you really want to play games super smooth in an iOS device, you got to be on A7 or higher processor, if not, this is the time to think for an upgrade my friend.