The Indian consumer electronics giant Micromax announced yet another device called Canvas Fantabulet F666. Two weird things though, one is it’s long name , the other is neither a phone or a tablet – because it has both larger display and 3G support. So it’s a phablet. Right after I read it’s name, I could think of it as the amalgamation of many worlds – fantabulous + phablet ( or tablet?) i.e., fantastic + fabulous + phablet. Regardless of it’s name, the company is terming it as a smartphone probably because of two reasons – First being it’s huge 6.99 inch screen is 0.1 inch less than of a tablet falling into smartphone screens, and second, it has 3G SIM support and voice calling facilities.

Design wise, Micromax Canvas Fantabulet F666 looks nice with rectangular body with metallic finish. On the back you would find the Micromax logo having canbas Tab label on bottom. Special mention goes to it’s 2.5mm thick dual box speakers which got built with composing module tooling with Aluminium Film Diaphragm and DTS technology. So, this would guarantee you great sound listening experience from this device. Coming to display, apart from being called as smartphone , it has massive 6.98 inch HD IPS display. The hugest display we’ve seen by far is LeMax from LeTV which had 6.33 screen. If you compare this device with that, two things you would notice – one, even though LeMax had less size, and two, it had QHD display which could deliver you amazing quality. But this fantabulet has only 720p HD display, which would look average on a 5.5″ screen. So, if you are going to consider this fantabulet as a smartphone coming foe less than 8k, then size is going to be an asset (if you are a fan of such ) and display wouldn’t be. If you are considering it as a tablet, then you may find it okay. You can only expect decent clarity from this display, but you have to deal with it since the company decided to make that sacrifice to fit into the destined price tag. We don’t have information about it’s dimensions and weight yet but clearly this is a large device. If you have small hands, you would find hard time carrying it.

Under the hood, Micromax Canvas Fantabulet F666 features 1.3 GHz quad core MediaTek MT8382W/M SoC. Running Android Lollipop v5.0, this device comes with 1 GB RAM and 8 GB flash storage which can be expandable up to 32 GB using MicroSD Card. Clearly these are mediocre specs. Even if we think that the quad core processor it comes with justifies the price bracket, RAM should’ve have been at least 2 GB to make it a nice deal. Considering the fact that 1GB RAM devices are almost extinct by now, you cannot expect to play graphic games, perform high end multi tasking on this device. That said, this guy can handle average performance without any lag. You better buy a SD Card if you use your device as a storage, because you may run out of memory sooner in this device. Still running Android 5.0 out of the box even in 2016 might not interest many people, but we can expect OTA update soon. 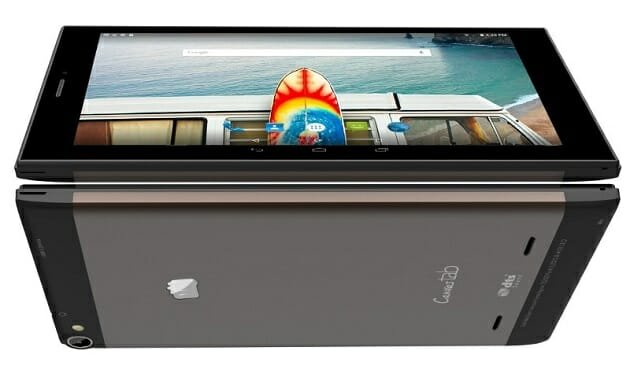 Coming to the camera division of this device, Micromax Canvas Fantabulet F666 has a 8 mega pixel Auto Focus primary camera with LED flash on the back along with 2 Mega Pixel sensor on the front side. For below 8k device, you cannot expect more. This camera would give you decent nice shots on day light and LED flash is there to save you under low light conditions. Appropriate and nothing fancy.

Micromax Canvas Fantabulet F666 has a huge 3000 mAh battery. You can expect great battery performance on this device since it only has to handle low quality display and mediocre CPU. You can surely get a day pass with this device, without running for an adapter. Micromax Canvas Fantabulet F666 supports basic connectivity options such as 3G ( It is a Dual SIM device with voice calling feature) HSPA+, Wi-Fi 802.11 b/g/n, Bluetooth 4.0 and GPS.

So, overall, Micromax Canvas Fantabulet F666 seems to be a great deal in some aspects. For ₹7499, you would get huge display but with less quality, mediocre CPU but less RAM, great battery decent cameras. Whether it is appropriate or not, you should decide. This device is exclusively available on Flipkart.