How to Set GIF Image in Background in iOS

To be honest, iOS is not so popular among them, who want to customize their iDevice according to your wish. Apple has some restrictions to let users personalize their mobile. Obviously, this is possible to change Wallpaper of Homescreen, lock screen etc. but that doesn’t mean you can do anything with homescreen or lock screen.

A regular iOS device user may face different problems while going to change the background or home screen or lock screen. As per Apple, iOS users can only use still images in the background. They cannot set GIF image in background in iOS.

You know that there are millions of awesome, attractive GIF images on the web. Nonetheless, you cannot use them on your iPhone or iPad. But, if you have a Jailbroken iOS device, you can easily set GIF image in background in iOS. Jailbroken users can do more than a regular iOS users and this trick proves that.

Read More: How to Customize Folders in iOS

How to set GIF image in background in iOS?

You can unlock the restrictions to set GIF image in the background of home screen and lock screen by making use of GIFPaper. This is as simple as said.

You can choose GIF image from various sources. For example, you can directly select a GIF image from Apple Safari browser, from any particular GIF image’s URL, from internal memory or even from saved images. If you do not want to use same image in the background of lock screen as well as home screen, you can select two images in two different locations.

From the settings panel, you can also change the speed of GIF image along with blur etc. On the other hand, this is possible to adjust scaling mode, transparency etc.

See Also: How to Customize Lock Screen of iOS 7+

At first, you will have to purchase the Jailbreak tweak for $1. After opening it, you will get a screen something like the following picture; 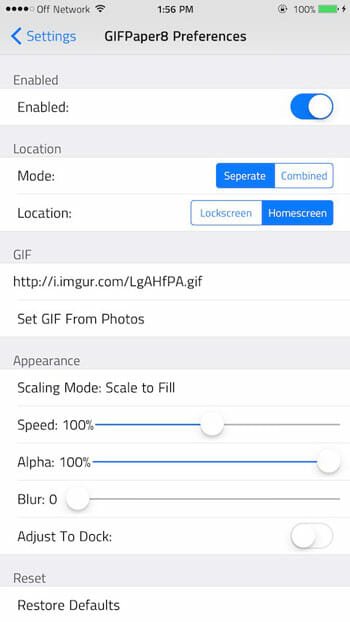 The first that you have to do, is enable it. Just tap on the corresponding button to Enable/Disable it. After that, you will get options to select the location. For instance, you can choose anyone between lock screen and home screen or both. The very next option will let you select the GIF image. You can select an image from all the locations, what are mentioned above.

After that, the next option will help you to change the appearance. That means you can change Speed, Transparency (Alpha), Blur etc. 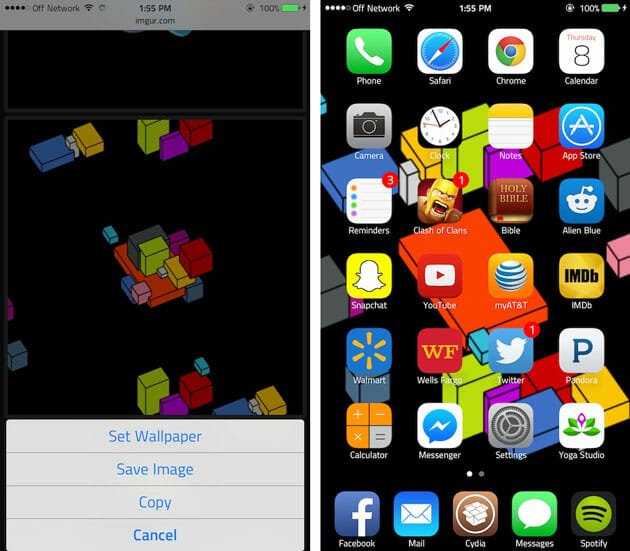 As of now, GIFPaper comes with only these features. More features are coming soon.

This is very easy to use software for Jailbroken iOS users. On the other hand, it costs only $1. However, you will get more than what you paid for.