Best Alarm Clock Apps for Android to Wake Up Early

There are mainly two types of people in the world. First category people go to bed at 5 am and second group people leave the bed at 5 am. If you belong to the second group, but you get a lot of problems to wake up such early in the morning, the alarm clock can help you for sure. Previously, there was dedicated alarm clock used by many people. However, now people are using mobile to set the alarm and wake up at pre-set time. If you have an Android mobile, here are some alarm clock apps for Android so that you can wake up early and start your day in a fresh mode.

Apparently, your mobile’s native alarm can aid you to wake up at a particular time. But, sometimes, some people do not want to use the alarm clock because of having fewer functionalities. If you are one of them, you may need to check out the following list of free alarm clock apps for Android.

This is the simplest alarm clock app for Android available for Android 4.0.3 and later version. Like some Android mobiles, you can have a calendar where you can set the alarm according to your wish. Being available for free, Go Clock offers several features including health tips, calendar, clock widget, timer, stopwatch, nightstand mode to change brightness and more others. Talking about the customization, this is possible to set a custom image as alarm clock background wallpaper. The user interface looks pretty good, and there is nothing complicated so far. Download 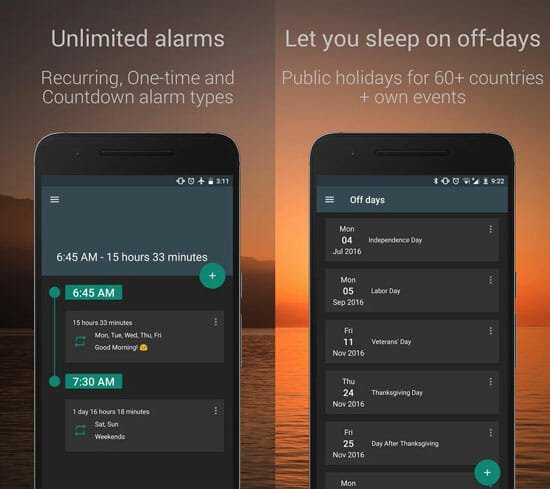 This is probably the best alarm clock app for Android for them, who fall asleep just after turning off the alarm and end up wasting their mornings. AMdroid Alarm Clock comes with some awesome functionalities. For example, you can set random math, captcha, barcode, etc. to turn off the alarm and if you fail to solve the problem, your phone will keep playing the alarm tone. Unlike other apps, you can integrate this app with your Android Wear device. Like sleep tracking apps, you can set this app like a way so that it wakes you up when you are in light sleep. Download

Timely is a beautifully designed alarm clock app for Android that helps users to customize the screen with own color and wallpaper. Talking about the core feature, you can get as many as you want. The best part is it can be synchronized on multiple devices over the cloud, and you can stop alarm on all those devices as once (which is somehow not good for many people). You will get custom widgets, Google Now integration, recurring alarms and more. Like native Android, you can snooze the alarm using your volume up/down buttons. Download

AlarmMon is something like AMdroid Alarm Clock that comes with various types of alarms. For instance, you can get a noisy alarm, game alarm, video alarm, audio alarm, etc. The Game Alarm is probably the best since you need to play a game to turn off the alarm tone. Otherwise, your mobile will keep snoring. It requires Android 4.0.3 and later version to be installed. On the other hand, most of the AlarmMon features are available for free. However, you need to spend from $0.99 to $17.99 to unlock all the features. Download

Alarm Clock Xtreme’s features are splendid regarding waking you up at a particular time. Like some other apps as mentioned above, you can set different things to turn off the alarm. For example, you can set math problems that you need to solve to turn off the alarm. On the other hand, you can get “quick nap” alarm, gentle alarm (that increases the volume gently), sleep tracker and more others. Like mentioned before, not all the features are free since you need to purchase them by spending from $0.99 to $4.99. Download

There are more other useful alarm clock apps for Android that will help you to wake up early in the morning. If you need any info about these apps, do let us know.