If you are an Android user, then you might not need any Introduction about SwiftKey Keyboard. Even though there are other Keyboards that are available on the market for Android, SwiftKey is the keyboard which people come back to always. This London based Company managed to attract many customers by introducing nice features. Some People like it even more than Google’s stock keyboard or Swype Keyboard.

SwiftKey Keyboard uses a bunch of well optimized artificial intelligence algorithms (it’s called “Fluency Engine”)at the background for predictions which predict the next word you wanna type with highest possible accurate level. One of the best features of this Keyboard that made it famous are – the “flow” swiping method for typing (which was introduced in SwiftKey Keyboard V4)- rather than typing individual letters for a word, you can simply glide your finger across the keyboard from letter to letter you wanted to type and release it. This feature is the favorite for many. It also took prediction mechanism to another level with “cloud sync” – which gives you the ability to get more customized predictions across your social accounts such as Google, Facebook and Twitter. It learns how you type and throws suggestions based on that.

The company recently rolled out a beta version of 6.0 and which is now out of beta and available in the Playstore for its users. This update is actually big one and came out with bunch of new features.

This version got both new features and fixes to existing ones.

This is an amazing feature and would attract more people. Double Prediction will take word prediction to next level. As you can imagine, this feature predicts not only the next word you wanted to type, but also the second word. Since swiftKey is already famous for using great algorithms at the background, it will learn more from your typing behavior, and gives predictions of next two words from now on. 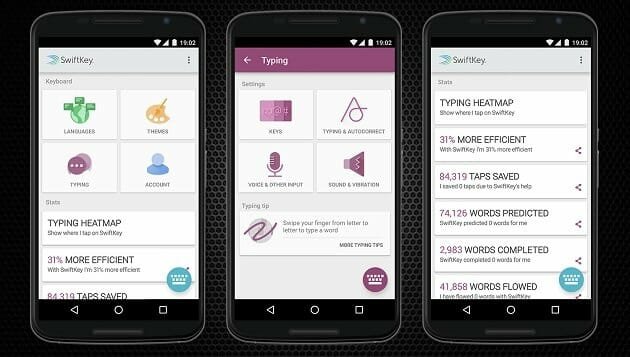 SwiftKey also updated with a massive overhaul to the settings menu since 2010 update. Now it includes clearly labeled sections in the settings allowing you to manage them easily such as languages, themes, typing style and SwiftKey Account.

Emojis
SwiftKey Keyboard is also known for its nice emojis to express your feelings while texting. It has bunch of categories to browse and pick one from them. This update also improved the accessibility to your favorite emojis. Now you can load your favorite and recently used emojis easily. To use this , just long press “123” key present at the left side of your keyboard. From there, you can as usual swipe between different emoji categories.
Language Support

SwiftKey is also known for supporting many other languages and delivering native experience. This update will add five more languages to its library : Yoruba, Igbo, Zulu, Xhosa & Breton.

You can download SwiftKey Keyboard 6.0 from Google Play now.