How to Get Android Marshmallow like Battery Percentage in Older Android

The latest version of Android called Android Marshmallow comes with loads of significant improvements. No matter whether you look at the user interface or the background changes, you can find some important enhancements in this edition. Although, most of the mobile companies have already announced the date of releasing Android 6.0 update to their mobiles, yet, there are some mobile manufacturers, which haven’t announced any date or anything about Android M.

Anyway, Android Marshmallow has a handy feature called battery percentage viewer. It means you will get the remaining battery percentage inside the battery. Now, this change has two different advantages. First, previously, users could add battery percentage but, outside of the battery icon on the status bar. That consumed a lot of space since the status bar is not too large. Second, this change will help users to know how much battery backup they have left to do something because nobody can ensure whether they have 50% backup or 40% backup by looking at the battery icon that is located on the Status bar of any Android device.

This feature is tiny yet very effective for all the people who always forget to put their phone on charge. However, this feature is not available in the older Android versions including Android KitKat, Android Lollipop etc. If you are not using Android Marshmallow or you do not have any plan to use that newest edition of Android, but you wish to use the battery percentage feature, here is a solution.

Here are some short but useful tricks to get Android Marshmallow like Battery percentage in older Android versions. You do not have to root your device. These apps work smoothly on any Android mobiles.

This is one of the best apps to add battery percentage on the battery icon. Battery Overlay Percent app comes at free of cost for Android 2.1 and later version. It has been downloaded for more than 100k times from Google Play Store, which implies the popularity of this app. Anyway, you can simply install this app and customize the battery percentage according to your wish. For instance, this is possible to customize size of text, positions and colors. On the other hand, the premium version of this app comes with custom color settings for different battery levels, own font and different percentage visuals.

Although, Battery Overlay Percent app works smoothly with Nexus 7, Nexus 10 etc. but some people claimed various issues while using it on Samsung tablets. 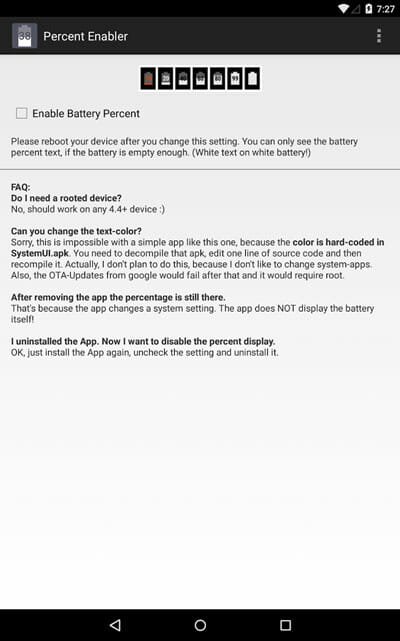 This is the simplest way to display battery percentage on battery icon that is located on your Status bar. Although, Battery Percent Enabler doesn’t require rooted Android device yet, you must have Android 4.4 or later version to run this app. It is available on Google Play Store at no cost. This is the simplest way because it comes with only one option. Just install Battery Percent Enabler and make a tick in the checkbox that appears prior to Enable Battery Percent. Following that, the battery percentage will be shown.

This is really an awesome feature which will let you know how much battery backup you have left right now so that you can start doing something important. These two apps are really useful to bring Android marshmallow like Battery Percentage in older Android versions. As these are free, there is nothing to lose.

Here is how to change navigation bar and status bar color on Android.