This gets really distracting and irritating after a certain level. Then there are some friends who never interact with you on Facebook, they don’t comment on your posts, like your stuff and neither you return the favour to them. Both of you are mutually oblivious and hence it makes sense to hide them from your Facebook news feed or unsubscribe from their updates.

The Problem with Unsubscribing, Hiding Or Blocking Friends On Facebook

Say you are friends with Bob on Facebook but you don’t interact with him and neither does he. Bob was your classmate 15 years ago; he was not a very close friend, so you two have never interacted before, whether online or offline. That’s fine, everyone has these trophy friends on their Facebook profile but when Bob goes really agressive and starts posting a pile of junk in his Facebook timeline, it becomes a serious distraction and a huge annoyance. I must say that Google Plus handles the noise better with a unique Mute feature, also available for Gmail conversations.

The easy way here is to unsubscribe from Bob, which means you will not see any of his posts in your Facebook  news feed. 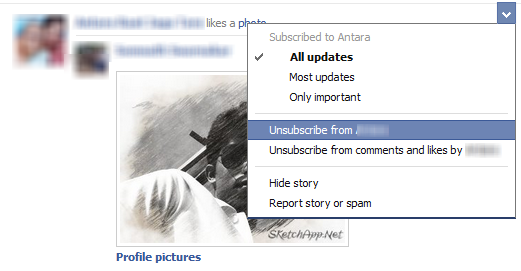 Further, you can fine tune the frequency of updates of a specific friend by choosing all updates, most updates and only important. This kinda works well and mutes all the junk posts from apps, games and events which you don’t want to see at all on your Facebook news feed. However, if you choose to “Unsubscribe”, you will not see any of his posts on your news feed which is an easy way to block someone on Facebook. His profile timeline will still be available to you and both of you can exchange mesages, IM’s or video chat with each other.

But the real problem is that you will also miss any important update e.g change in relationship status, new employment status, birthdays and other meaningful life events. Blocking or unsubscribing is, in some ways considered a rude behaviour and if you are someone who wants to declutter his Facebook news feed without having to block or unsubscribe from friends, here is a useful tip which should solve the problem.

One such smart friend list is the acquaintances list which comprises of people whom you are friends with but don’t want to hear from. This list is enabled out of the box and you can access it from the left sidebar as shown below:

People on your Acquaintances list will rarely show up in your News Feed, as Facebook will automatically scan your interacting habits and decide whether a specific friend is close to you or not. You can also choose to exclude these people when you post something, by choosing Friends except Acquaintances in the audience selector dropdown box as shown below: 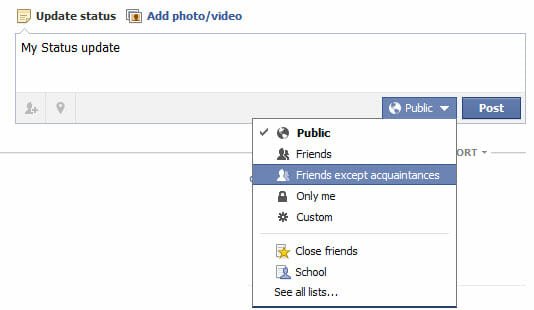 When you share something and choose the privacy as “Friends except acquaintances”, the post will be shared with your close friends only. That means, only your important friends with whom you communicate frequently will be able to see it, like it and comment on it. Your trophy friends whom you have added to the acquaintances friend list won’t see your post in the first place. Works like a charm and you need not worry about unsubscribing from updates and neither you have to block a bunch of people.

To add someone on the acquantances friend list, all you have to do is hover over the profile name and add him to the list, as shown in the following example: 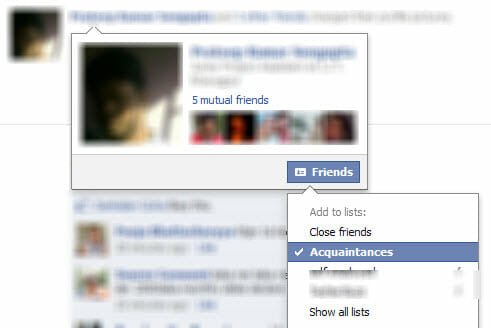 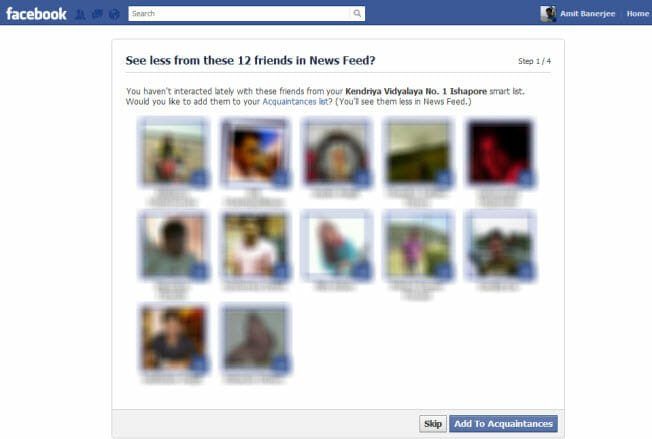 Once you are done adding friends to the acquaintances list, you will feel the change. My Facebook news feed is clean these days and I have not unsubscribed from a single friend, neither I have to maintain or worry about a blocked list. I don’t miss important updates from any friend with whom I don’t interact but at the same time, I don’t see unnecessary updates from my not so close friends on Facebook. This has helped me reduce distraction and focus on the stuff that really matters.