The one thing which separates Google Plus and it’s closest rival Facebook is the ability to share posts with specific groups of friends.

Google Plus has introduced the concept of “circles” which is nothing but a fancy name for friend lists. You can organize friends and followers into circles of your choice and share posts with only a specific circle or friends outside a specific circle.

Many users have this confusion that friend lists is an exclusive Google Plus feature and it is not available in their Facebook account. This is a myth.

The fact is that Facebook has support for friend lists for quite some time and it works the same way as “Circles” in Google Plus do. By creating friend lists on Facebook, you can hide or share status updates, posts, links and individual photos with specific group of friends and you can also ensure that some friends can neither see a specific Facebook status update, nor they will have the ability to comment on it.

2. On the friends page, Facebook will prompt you to import friends and contacts from other services such as Gmail, Yahoo and Skype. Ignore this prompt and click “Manage friend list” [#]

3. On the manage friend list page, Facebook will automatically sort your friends on the basis of how often you interact with them.  The default setting is “recently interacted”, click the drop down menu and change this to “All friends” 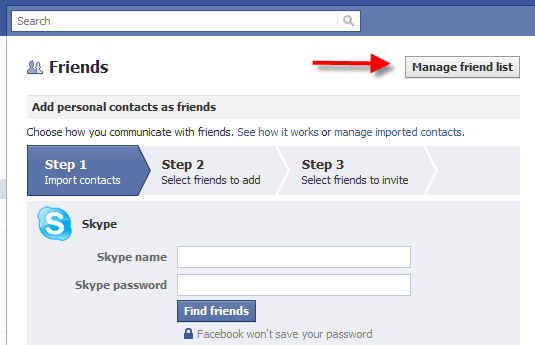 Why? Because when you are sharing a very personal update on your Facebook profile, you may want to restrict people from commenting on your Facebook status update. There can be situations when an unknown friend might destroy the charm and beauty of your photo or status update by posting a stupid or vulgar comment.

Hence, it is really very important to organize your Facebook friends into lists and ensure that every friend is assigned to at least one list. When you are sharing something very personal, you can exclude the not so important friends using the list to which they have been added by you. You can add a single person to multiple lists, it’s perfectly all right.

The next step is to pick a relevant name for your Facebook friend list and add the members one by one.

On the other hand, if you want to create friend lists on Facebook really quick and need an easier way to automatically sort all your Facebook friends into different groups, here is a much better option.

Yes, Katango will automatically scan through your timeline and your friends timeline to determine which friends share common attributes, hobbies, profession, hometown, employment and other profile specific details. Katango will also find out the friends with whom you frequently interact with and the friends with whom you rarely share anything. Next, Katango’s algorihm will automatically categorize all your Facebook friends into new groups.

Katango’s algorithmic way to generate Facebook friend lists on the fly is ideally suited to those people who have a huge fan following and have thousands of friends on Facebook.  Katango will let you rename the lists and delete or add people to your lists later, so you can spare 2 minutes of your time and let Katango do all the work for you. The lists created using Katango will continue to work whether or not you revoke application permissions from your Facebook account preferences.

Watch the following video to learn how Katango automatically categorizes your Facebook friends and puts them into relevant and meaningful groups.

Katango is very good in identfying “sets”of friends and it does this through mutual connections, comments, likes and how you and your Facebook friends interact with each other. When I used Katango with my own Facebook account, Katango created 9 lists for me. And I have to say that Katango’s algorithm is more than perfect and it is exactly what I was looking for.

1. School friends: This list contains all the friends with whom I studied in school. Katango might have found the same school name on all these profiles and hence it was easy on it’s part to group all of them into a single list. Not bad!

2. Close connections: This list contains all the friends and family members with whom I interact frequently. This includes comenting on posts, sending private messages or maybe liking the status update of each other every other time.

4. College friends: This list was close to good but one downside I found is that katango added a few faculty members and professors whom I don’t want to be friends with. At least on Faceb0ok!

Overall, this app is a lifesaver if you find it really difficult to manage your Facebook friend following and share specific updates with only specific group of friends. Give Katango a try and let us know your thoughts and ideas in the comments section below.