India is one of the biggest markets in the world now, which shows unabated growth in internet usage. However, the rise of mobile phone sales has a direct say in that, and that the mobile only population is growing at an enormous rate is no more a matter of debate. With 243 million users using internet, India is set to topple US taking the pole position and will be 10 times of the Australian population. However, it is still sad to see that the PC penetration in India remains as low as 10% compared to China’s 35%, Russia’s 57% and Malaysia’s 64%.

The primary reasons for this are limited sense of utility, high cost and absence of localization to appeal to rural India. For Indian population to progress, PC still remains a to be a deal breaker compared to portables which are costlier and smartphones which aren’t yet smart enough to replace this old medium of learning.

However, the only way a student or NGO or small businesses on a limited budget is to either buy cheaper brands or buy untested used PCs from popular brands from individuals which do not have a benchmarked testing mechanism in place.

RenewIT is on a mission to fix this scenario and has been doing a great job for the last 5 years. Their mission statement reads, “The primary goal of our company is to increase the number of high – quality, low – cost PCs and related parts and accessories available to Students, NGOs, Small Businesses and other users. We mainly source computers from large MNCs – refurbish and remarket them. This helps bridge the large digital divide that exists in a country of over a billion people.” 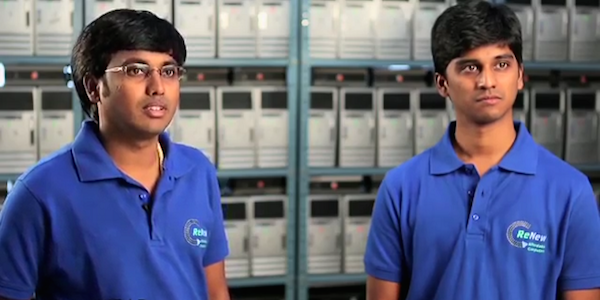 Mukund BS, an IIM Calcutta and NIT Surat alumnus, inspired by the ITC’s “Triple bottom line” felt a need to bring a better solution to economically and intellectually empower the challenged. Raghav, co founder of the venture and also a graduate from Western Michigan University and MBA from Manchester Business School found how the corporates disposed/abandoned old systems. He too believed that those can be reused with proper setup can actually be used for greater good and may have a business potential laying grounded.

The company has so far sold more than 10000 refurbished PCs and have their facilities in Bangalore and Hyderabad and currently in process to open up in Mumbai as well. They are ISO 9001, ISO 14001 and OHSAS 18001 certified company. They have 50 dedicated tests in place to ensure the old PC is usable. RenewIT offers 6 months of warranty and also provide after sales support. The prices of their computers start as low as Rs4500, which is quite affordable by the target market.