How to Install Pokemon GO on Android in Any Country

The 90’s cartoon has returned. Yes, that’s correct. What I’m saying is Pokemon GO. This is probably quite possibly the most trending game over these present days, which has shattered the majority of the app download records including Instagram, Pinterest and even Snapchat. Having said that, the worst thing is Pokemon GO is not available in all the countries throughout the world.

However, if you reside in such a country, where Pokemon GO is not obtainable right now, here is a trick. Learn how to install Pokemon GO on Android in any country. Typically, if you belong to any of the countries that is not mentioned previously, you will definitely get an error called This item isn’t available in your country while trying to download this game from Google Play Store. However, this error can be fixed within moments.

Install Pokemon GO on Android in Any Country

There is a trick for Android users and it is related to downloading APK file of Pokemon GO. However, some people do not want to install APK file on their Android mobile because it may go wrong. Therefore, this trick will let you install Pokemon GO in any country without downloading the APK file from third party site. In fact, you can download this game to your Android mobile right from Google Play Store, which is the official app store for Android.

The trick is very simple. You just have to install a VPN app on your Android mobile. Following that, you can change the location and hence, you would be able to install Pokemon GO from outside of US and other available countries.

Talking about the free and trustworthy VPN for Android, the first name comes to my mind is TunnelBear. TunnelBear is a free VPN app available for Android 4.0 and later version. Although, there are more other free VPN apps for Android but this is probably the best as it has no such complex options and therefore, you can make it out quicker.

TunnelBear is not completely free. You will get 500 MB in each month and you have to create an account to use TunnelBear on Android. Therefore, download and install TunnelBear on your Android mobile. Create an account and setup your VPN by following the screen options. After opening the actual TunnelBear screen, choose United States to use it as your virtual location. 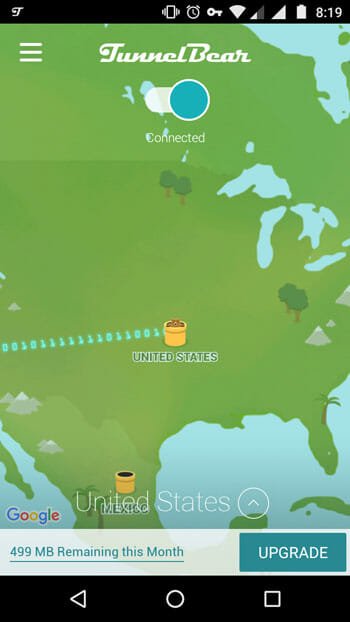 You can also use other available countries, where Pokemon GO is available. Now, you have to remove Google Play Store and Google Play Services cache. Otherwise, Google Play Store will keep catching the old location and would not fetch the new virtual location. Therefore, go to Settings >> Apps. Tap on the three dotted button and select Show Systems.

If you are not getting Pokemon GO in the search result, you can simply search for it in any Google Chrome or any other browser and then open the Google Play Store link from Google search result page.