Best Skateboarding Games Ever Made

Skateboarding is a riding or action sport. If you know how to play with a skateboard physically, but you do not have much time or space around you, you should check out these games. Here are some of the best skateboarding games for Android, iOS, etc. These games are mainly made for mobile platforms. Some of the mentioned games are available for free, and some of them need to be purchased.

Best Skateboarding Games Ever Made For Android And iOS

Mike V: Skateboard Party is one of the best skateboarding games for Android and iOS. No matter whether you want to do freestyle or preset tricks, this is possible to do everything in this game. From graphics to features – everything is top-notch. You can do preset tricks as well as you can make your style while playing this game. According to the developers of this game, it offers more than 40 unique tricks, and the good part is you can customize those tricks based on your needs. You can play alone and challenge your friends online.

Skateboard Party: 3 is yet another awesome skateboarding game for iOS and Android. Although the graphics are not as good as the first game, this is up to the mark. You won’t face any problem like lag, hang, etc. while playing this game even when you do not have a highly configured mobile. It offers eight different locations, sixteen skates, etc. Like Mike V: Skateboard Party, this game also offers 40 different tricks. This is possible to practice various tricks with the skateboard at various locations.

Regarding compatibility, you need Android 4.1 or later version, and iOS 8.0 or later version to download this game. It has some in-app purchase options that can unblock all features.

Tony hawk’s Skate Jam is developed by Maple Media, which developed the first game on this list. It is another awesome skateboarding game for Android as well as iOS. It has a Career Mode that helps you save all the progresses. You can do various tricks, flips, etc. in this game. Although other games offer more than 40 unique tricks, you have to be happy with 35 tricks if you install this game. The graphics of this game is good enough to play for a long time. You may not find any clutter, as all the options are well-managed.

If you need near real-life experience from a mobile, True Skate can help you get that. Although this is a paid game, it is affordable as it costs only $1.99. However, there are some in-app purchases that you need to do if you want to unlock all features and packages. If you do not spend money on in-app purchases, you need to be happy with a single location of the track.

Regarding the user interface, it looks pretty good. As mentioned, you can find a great real-looking UI in this game. It is possible to do all the standard tricks and customize them accordingly. The paid packages contain some missions, slow motion, board image, and more others.

According to the developers, you do not have to spend more than 10 minutes to understand the game, but you need a lifetime to master it. This fingerboard game is quite popular among people who want to download a game and get started with that immediately. Unlike True Skate, Touchgrind Skate 2 is a free game, and you can download it on Android mobile, iPhone as well as iPad.

The graphics are pretty good, and you may not get any problem while playing this game. However, if you are a Huawei user, you need to disable HiTouch feature. Otherwise, some annoying pop-ups can appear on your screen. Although you can download this game for free, you need to spend some money to unlock all playgrounds, tricks, etc. 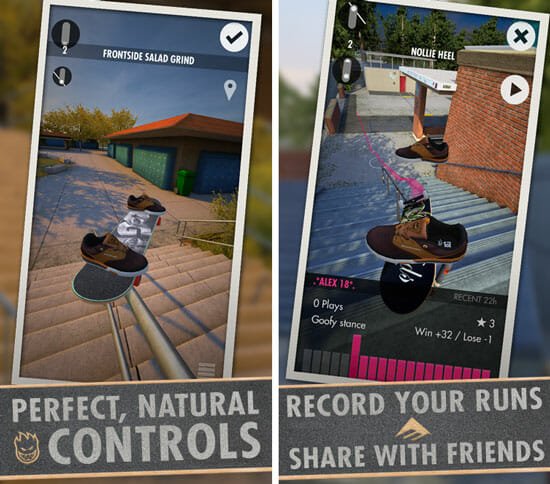 Skater is a paid skateboarding game for Android, which comes with almost all the features you might need to be a master of this sport. Undoubtedly, Skater has an excellent user interface along with excellent functionalities. Multiple locations are available, and therefore, you won’t get bored quickly. You do not need to know all the controls since it teaches you everything if you open this game for the very first time.

Some people claimed to have some bugs in this game, but we didn’t face any problem during the test. Although the download page says nothing about this, you need a quite good mobile to play it smoothly and without lagging.

Regarding compatibility, you need to have Android 4.4 or later version.

There are more other games in this category. However, most of the skateboarding games are not as good as these games. The vast majority of the games are available for free. Therefore, you can try them to know which one suits you the most.