How to Get More Battery Backup from Samsung Galaxy Note 5

An eye-opening mobile is now very much trending in the smartphone market. This new eye-opener is called Samsung Galaxy Note 5, which was announced and launched in August 2015. Although, it took sometime to be everywhere in the world, yet, eventually it has brought some good news too. Android Marshmallow is coming soon for this new Samsung’s beast.

As the name defines, this is the 5th attempt of Samsung with Galaxy Note series and this time, it was a blast since Samsung Galaxy Note 5 is probably one of the most successful phones Samsung has ever launched. Thousands of people are using Galaxy Note 5. However, some people have claimed that they are not getting as much battery backup as expected.

This is because it is a very rich mobile in terms of configuration but the battery is not so rich as compared to other features. It comes with a 3000 mAh battery, which seems not enough for this mobile. This is the reason, why you are getting such a low battery backup from this mobile.

Anyway, for them, who are getting low battery backup, can check this post to know how to increase it. Actually, the problem belongs to both mobile and user. Sometime, the problem comes from the user side when some problems belong to the mobile itself. Here are some tips those will help you to get more out of this 3000 mAh battery of Samsung Galaxy Note 5.

Previously, we shared some tips to do the same. But, if you think they are not working as you have expected, check this out. Here are some other practical tips to get more battery life from Samsung Galaxy Note 5.

YouTube videos use flash, which is a battery killer. No matter, what device you use, your battery will be drained rapidly, if you keep watching videos on YouTube or any other site. If YouTube video is much, you can consider the YouTube app for a particular span of time. Otherwise, never ever consider any HTML5 enabled web browser like Google Chrome or Firefox to watch YouTube videos. They will ruin your battery very soon.

Do Not Always Scan For Wi-Fi 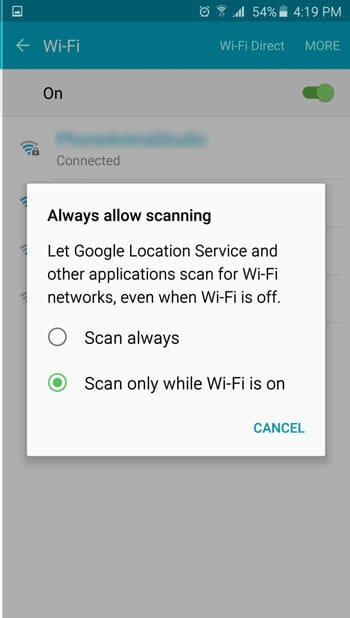 This is another battery killer included in today’s mobiles including Samsung Galaxy Note 5. Earlier, mobiles didn’t scan for Wi-Fi automatically. But, now, some mobiles have the feature that scans for Wi-Fi all the time even when your Wi-Fi is OFF. This feature initially developed for users to be connected instantly right after turning Wi-Fi ON. However, the drawback of this feature is it uses Google Location Services all the time. That will hurt the battery dramatically.

Do Not Use “Auto” Brightness

Automatic brightness feature of Android mobile helps a lot to all the people. It detects the surroundings and set the brightness automatically. However, sometime, some mobiles keep using the high brightness, which is bad for battery. Although, this is a good choice to use Auto brightness, yet, this mobile seems against this feature. Therefore, you should use manual low brightness that suits your eye. You can also change it manually according to the surroundings. Even though, it will not help you a lot, but it affects a bit.

Nowadays, almost all Android mobiles come with a dedicated power button that helps users to power on/off, screen on/off. However, some people forget to use it all the time. Hence, their mobile goes to standby and the screens gets off after that predefined time (15 seconds, 30 seconds etc.). If you have similar issue, you can set up a lower display timeout (e.g. 15 seconds). Following that, no matter whether you forget to off the screen or not, your mobile will take care of it.

Samsung Galaxy Note 5 is a great mobile indeed. But, some users are claiming low battery life. This is however a common problem in today’s mobiles. But, now you have the solution. These are major problems. There are more other things you may have to keep in mind while using a smartphone and want to get better battery life.