How to Manage App Permission of Installed Apps in Android 6.0

Android Marshmallow or Android 6.0 comes with loads of new features. In fact, developers have paid a close attention to security and as a result, something new has been included in this newest Android version. If you are using Android Marshmallow or are going to use this edition in near future, here is a great feature you should consider using.

You know that whenever you install an Android app that asks you to allow it to access more other in-built apps and features. For instance, suppose you want to install Facebook Messenger in your Android mobile. When you will get tap on the Install button on Google Play, you will get a pop-up window where you have to press the Allow button to continue the installation. Generally, Facebook Messenger requires permission to use Contacts/People, Camera, Calendar, Location Services and many more. Instead of knowing that Facebook is spying on you by getting all the required information to detect your location, we press the Allow button. Sometime, we need to do so to install any particular important app.

However, Android 6.0 is going to change that experience for ever. Previously, users had to allow all the things in order to install that app. But, Android Marshmallow has the option to allow or revoke particular app permission. You can go through all apps and check whether anything suspicious is going on or not. You will get the whole list of “permissions” that you have given to a specific app.

On older versions of Android, it was possible to revoke particular app permission using third party apps. Sometime they worked well when sometime they failed to do what you were looking for. But, in Android M, you will get full freedom to manage app permission installed apps.

As mentioned before, Android 6.0 comes with this feature. It implies that you do not have to install any other third party app to get started. Anyway, to allow or revoke particular app permission in Android Marshmallow, at first open the Settings of your mobile and go to Apps to open all apps. Here you can find all the apps those are installed in your mobile. If you need to work with any in-built app or pre-loaded app, just head over to All tab and select that once. Following that, tap on the app to open respective settings and options. You will get a screen something like the following picture, 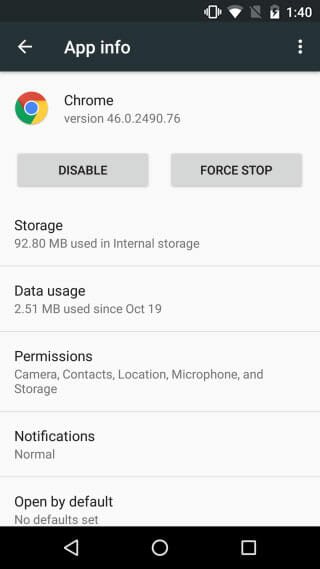 Just tap on Permissions. Here you can find all the permissions that an app requires to run on your mobile. You can toggle the green button to allow or revoke any permission. For instance, you can allow Camera to work with Hangouts, Skype etc. but block to work with Facebook Messenger, Google Chrome etc. 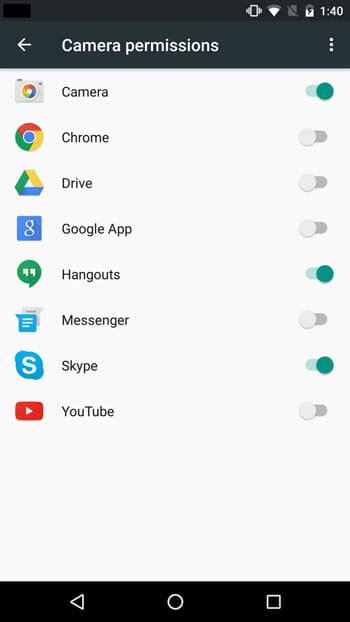 This is very easy to set it up. It doesn’t take more than a minute to make out everything. Do check this settings and provide only required permissions to any app.

Learn how to get Android M like battery percentage in older Android.