If you like to play dinosaur games on your mobile, you should check out this article. From basic to advanced – every kind of dinosaur games are listed in this article, and you can play them without any internet connection. No matter whether you have a computer, mobile, or tablet, you can certainly play this offline dinosaur games to pass free time.

This is probably the best and most popular offline dinosaur game available in the market. The graphics are not good, but the quality of this game is top-notch. The best thing is it appears when you do not have an internet connection. If your data connection is gone, and you are using Google Chrome browser, you can find this game right after clicking the F5(refresh) button. Controlling your dinosaur is pretty straightforward. You can use the up/down arrow keys to move it, or you can use the spacebar to jump the character up to a particular range. After playing for a specific time, the background gets changed. You should be very conscious during that period.

Jurassic World Evolution is an emulator for the Jurassic World theme park. You can create your theme park, place various objects according to your wish, and so forth. There is no doubt that the graphics of this game is unbelievable. You need to deal with natural disasters, dinosaur escapes, breeding, and so on. You can find more than 40 dinosaurs in this emulator that you need to take care of. This game is compatible with PS4, Xbox One, and Steam.

LEGO Jurassic World game is for kids, but adults can play it as well. It is a cartoonize game with LEGO brick style making, which makes it even better for toddlers. If you watched the first four Jurassic World movies, you could find countless similarities in this game since some of the main characters are available in this dinosaur game. The best thing is that if you want to play with someone like a friend or kid, etc. you can do that since it has a multiplayer option. However, it has only a local multiplayer option. LEGO Jurassic World game is available for almost all the popular platforms including Android, iOS, Windows, Xbox One, Xbox 360, PS3, PS4, etc. If you are trying to download it for iOS, make sure you have iOS 8.0 or later version. On the other hand, you need Android 4.2 or later version to install this game.

This is a quite old game, but it does the job pretty well, and it can pass your time like anything. Dinosaur Hunter Dino City 2017 is a survival game where the main character needs to kill some dinosaurs to stay alive. The graphics look old-school, but you should not have any big problem while using this game. During the test, it didn’t show any problem like a glitch, hang, etc. It offers some standard weapons like AK 47, UZI, etc. Regarding compatibility, you need Android 4.1 or later version to download and install this game. Download 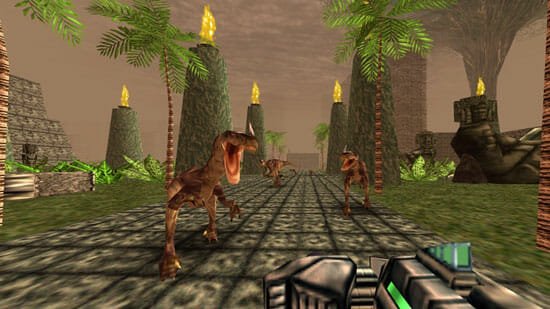 If you do not care about the graphics and you need a solid offline dinosaur game, you should take a look at this game called Turok. It is available for Xbox One, and you can purchase it for $19.99 from Microsoft Store. Turok was previously named as Dinosaur Hunter, and it gained a lot of popularity at the initial time back in 1997. Talking about the game, you need to kill some dinosaurs to keep your character alive. You need to complete one stage to upgrade yourself for the next one – that is the only and straightforward rule of this beautiful game. Some of the common and popular dinosaurs such as T-Rex, Velociraptors, etc. are available in this game. The only drawback of this game is that it doesn’t have a good user interface as compared to other games. Although the developers re-released it, they kept almost the same interface for this game. Download

Yoshi’s Crafted World is available for Nintendo Switch and this the most basic dinosaur game you can play in these present days. It cannot beat the first game on this list in terms of simplicity; you should not expect a lot from this game. At the initial days, this character was included in the Super Mario games. However, now you can find its own game called Yoshi’s Crafted World. You need to keep the dinosaur running to collect points by going from one place to another. During the journey, you have to complete various tasks within the given time. If you played this game earlier, you could finish it quickly. However, it might be an exciting game for your kid. Although this is a kid’s game, it costs $59.99, which seems to be expensive. Purchase link

Although there are so many dinosaur games for various platforms, you cannot play them without an internet connection. However, these games mentioned above can be played without a Wi-Fi or cellular data connection. I hope they will help you pass your leisure time.