How to Set Different Brightness for Different Apps on Android

When it comes to a mobile platform that has loads of free apps, games, eBooks, etc. Android comes first to the mind and all thanks for Google Play Store that has everything that a user is in need of. Those, who use mobile all over the day, know how much painful it is to have a mobile with high brightness. Sometimes, we need high brightness for a particular app, and sometimes we don’t. Therefore, to help you in such situations, you need to use a tool called Brightness Control that assists users to set different brightness for different apps on Android.

Let’s assume that you are writing an email, which can work in low brightness. But, movie players do not work good having a low brightness. There are many people, who do not want to use the same brightness level for all apps available on their mobile. Instead of opening the status bar and changing the brightness after opening each app, you can simply opt for Brightness Control that will allow you to set different brightness based on the app.

How to Set Different Brightness for Different Apps on Android

Like said before, this is very easy and not much time consuming when you have Brightness Control app on your mobile. Talking about the availability, it works or available on Android 5.0 and later versions. This is a completely free and very easy to use tool for Android users.

To get started with this tool, at first, install it from Google Play Store. After installing it, you need to grant System Write Permission on Android 6+ and Package Usage Permission on Android 5+. Otherwise, it won’t be working at all since it will not be able to overwrite the system for changing brightness automatically.

After granting all the permissions, you can find a screen something like this, 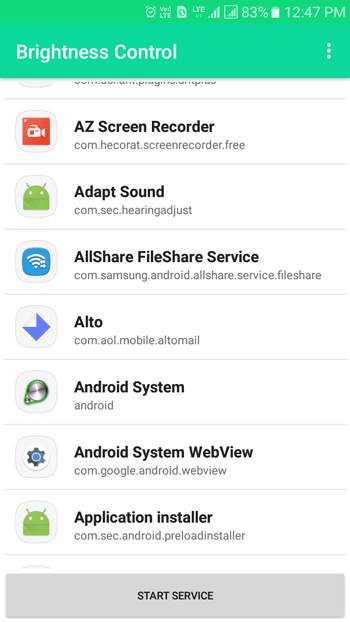 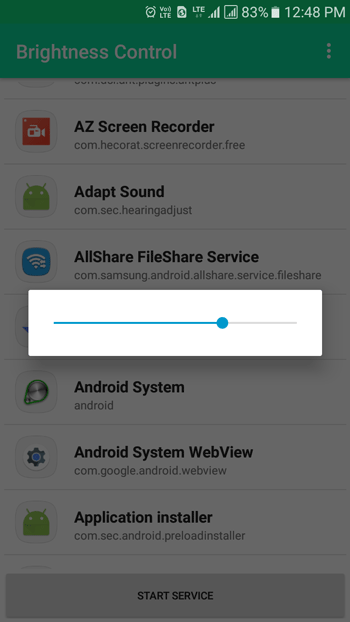 This level would be set when you are on the home screen or open any other app that you haven’t set any brightness for.

There are some more apps that can do the same or slightly different. If you want to take a look at those apps, here is the list.

Tasker is mainly known as an automation tool for android. However, you can use this app to change the brightness at app level. It doesn’t matter how many apps you have, you can certainly use it to set different brightness for different android apps. You need to spend a good amount of time to understand the workflow of this app. If you already know how it works, this is very easy for you to set the brightness level according to the app. Tasker is not a free application. You need to spend a couple of dollars to purchase this app, which is compatible with android 2.3.3 or later version. 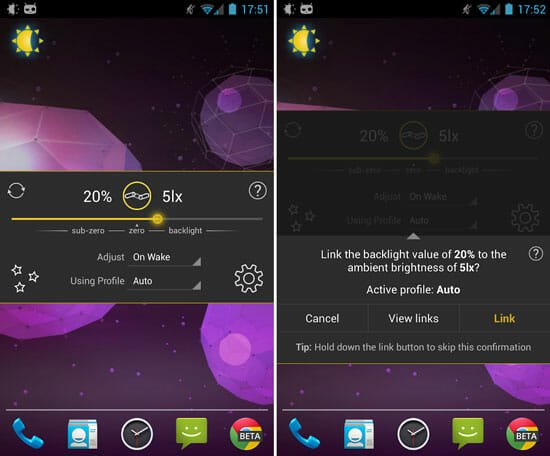 Lux Auto Brightness is another simple application with some handy features to exclude the extra light from your display. Sometimes the lowest brightness is high enough is some low light areas. At such moments, you can use Lux Auto Brightness app to dim your screen as much as you want. It comes with blue and red light filter those are equally harmful for human eyes. The good news is you cannot find any unnecessary advertisements in this app. However, you need to purchase it from Google Play Store. Talking about compatibility, you need android 4.1 or later version to install this application. 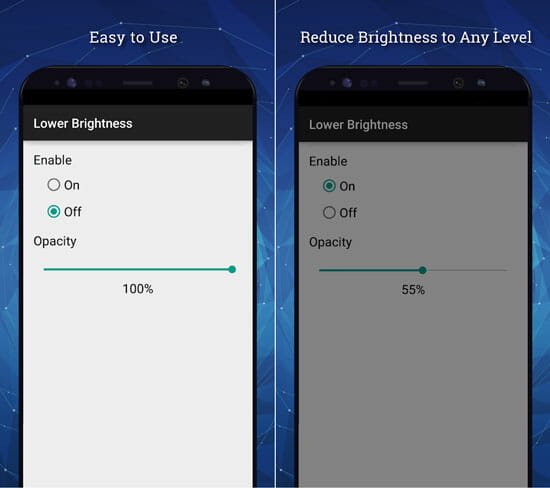 If you unlock your phone in a dark place, you have to shrink your eyes by almost 50%. Many people cannot use mobiles with the lowest brightness as well. Lower Brightness Screen Filter is good for those people. It has some basic settings so that you can set a very low brightness. As mentioned, this is a very easy to use application. You can find only two options in this app. The first one lets you turn this app on or off. The second one lets you change the brightness level according to your requirements.

That’s all! These are some of the best apps you can find for this purpose. Hope they would be helpful.