GIF, the widely popular but less used image format on the web. Few years back, when GIF got popularity, tons of memes have been created with GIF images. However, the popularity still exists and different instant messenger users are using GIF meme.

If you do not understand, what GIF image actually is, let me explain in simple words. Have you ever seen a 5 seconds or 10 seconds (generally awkward)  video on any website? If yes, you might have also noticed that those videos start playing automatically. This is because those are not actually videos. Those are probably GIF image.

You can also use GIF image to create funny meme. This is why GIF image used for.

However, YouTube is rolling out a great feature that will let you create GIF image from video. YouTube is the second largest search engine and millions of videos are being uploaded since the first day. Just few days back, YouTube has unveiled such a great feature for GIF lovers that would assist you to create six seconds GIF image within moments.

Generally, this is quite problematic to create GIF image from a YouTube vide since this is not legal to download any YouTube video. Although, the latest YouTube app for Android lets you watch videos without internet but this is not available around the world. This is where this official YouTube feature excels.

By making use of this official method, you can easily create GIF image. Let’s seen how to do so.

First thing first. You cannot use this feature on any video of YouTube. As of now, we have got only one YouTube channel, where YouTube has rolled out and is testing this feature. However, the procedure to create GIF image should be same. Therefore, let’s check the tutorial.

After that, select a video, where YouTube is testing this GIF image creator. You can check PBS Idea Channel. 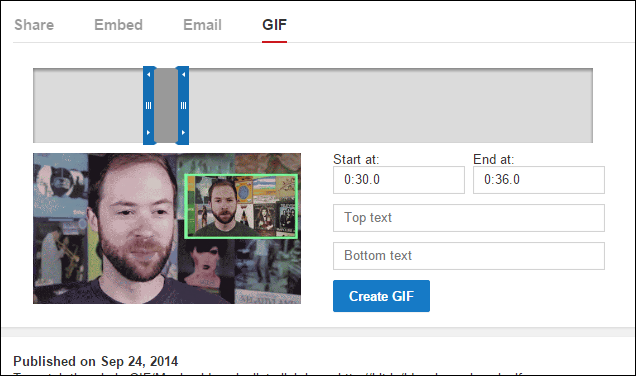 Now, you can select only six (6) seconds from that video to create GIF image. You can also write some texts.

After doing everything, hit on Create GIF button.

Within few seconds, you will get the direct link your created GIF image. 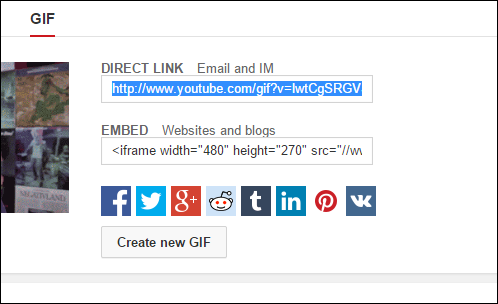 You can also share that GIF image on various social networking websites.

Hope this feature will help you a lot in near future. Let’s seen when YouTube will roll out this option for all videos.