How to Launch Apps using Gestures on iOS

People always try to do something to get things done quicker and various operating systems and apps help them to do so. For example, iOS has so many things what can be used to do any time consuming tasks faster. However, sometime we feel a lack of a feature that can open apps or do something on automation. To solve this problem, here is an app for iOS. Although, it doesn’t do most of the things on automation, yet, it can solve a big problem.

We often go through hundreds of contacts to find a mobile number or email ID of someone. Sometime, we get it easily, when sometime we spend a lot of time. Also, many people install loads of apps and get numerous problems to open specific app frequently. That is where this app comes in.

Here is an app called LaunchCode, which is compatible with iOS 7.0 and later version. This is one of the best apps that can open any app, contacts, type messages etc. using gesture. Obviously, you need to set them previously. But, it saves a lot of precious time of users.

LaunchCode doesn’t comes with loads of options or features. Instead it has couple of features and all they are very useful. Two of the main features are “Go Shortcuts” and “App Shortcuts”.

Go Shortcuts: Sometime, we need to dial a number frequently. At such moments, you can use Go Shortcuts to set gestures for dialing a number or typing a message to someone.

App Shortcuts: As the name says, you can open various apps using gestures. This is also possible to open certain sub-option of any app using App Shortcuts.

You can find more other options but these two are the main features. All the options are categorized under these two features.

Setup gesture in LaunchCode to open app or dial number

This is however very easy and not much time consuming. At first, download LaunchCode to your iOS device. It is compatible with iPhone, iPad and iPod touch. Following the download, obviously you need to open the app preference. After that, you can find an option called Add Shortcut under My App Shortcuts and My Go Shortcuts. Choose, whether you need to add App Shortcut or Go Shortcut. 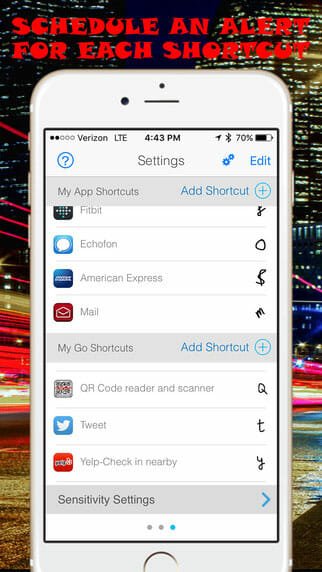 If you choose App Shortcut, you will get all the installed apps on your screen. You can also search for any app that is not listed here. However, after selecting the app, you can choose particular task. For example, if you Maps, you can enter starting point and destination. Then, this will be possible to assign gesture.

You can also add symbol so that you can recognize that quickly.

To open an assigned app using LaunchCode, at first, open the LaunchCode app from menu drawer. You will get a screen something like the following picture. Just draw the assigned gesture to open that particular app or do something that you can set earlier.

This is as simple as that.