Check Out Mozilla’s App Store – Install Web Apps On Any Device, Any Browser

Web applications are becoming more and more popular because of two reasons. First, there is no need to download bulky software setups to do a simple job – whether it be editing a photo, downloading videos, streaming music, or creating a website.

The second advantage of web applications is that they are cross platform compatible – it’s doesn’t matter whether you’re in office, at a friend’s place on surfing the web on your home computer. If you’re using a web application from a browser, chances are that you can use the application from anywhere, anytime – as long as you’re connected to the internet.

With the rising demand of cross platform support for devices, it’s no wonder that web applications are the need of the hour. We saw the launch of Chrome web store and now Mozilla has announced a really useful and impressive App store page.

Yes, Mozilla App store is here and you can now install apps from Mozilla app store at apps.mozillalabs.com/appdir/

What Is Mozilla’s App Store

Mozilla App store page allows you to install Apps from Mozilla App directory in any browser or any device. It doesn’t matter whether you are using Google Chrome, Safari, Opera, Internet Explorer or Mozilla Firefox – the apps from Mozilla’s App store will continue to work, regardless of whatever browser you’re using.

And unlike browser extensions and add-ons, apps installed from Mozilla App’s directory are compatible with desktop browsers as well as mobile browsers. All the web apps that are currently available in Mozilla’s web app directory are developed using standard HTML5, CSS and JavaScript. 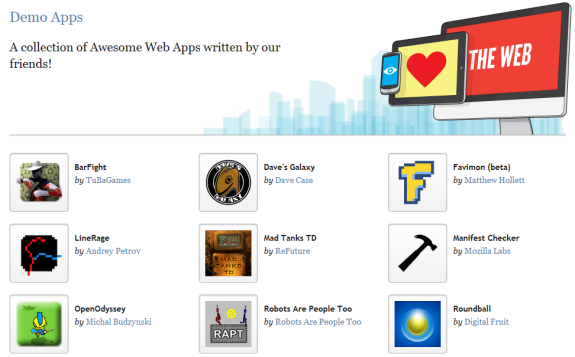 The difference between apps from Chrome web store and Mozilla web apps is that the latter runs on any browser and any device. I tested out a few apps from Mozilla app store in Google Chrome and they ran smoothly without any problems as such.

Installing apps from Mozilla web store is perfectly simple. All you have to do is open the app store page and hit the “Install” button next to the app which you want to install. And that is all. 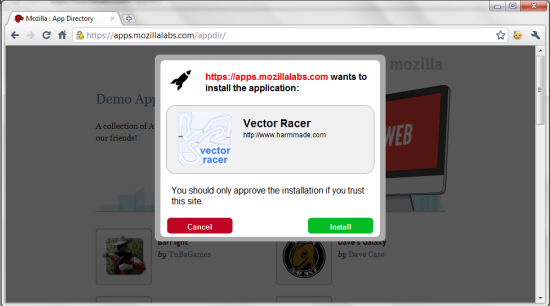 Here is how the home screen of Mozilla Apps page looks in Google Chrome: 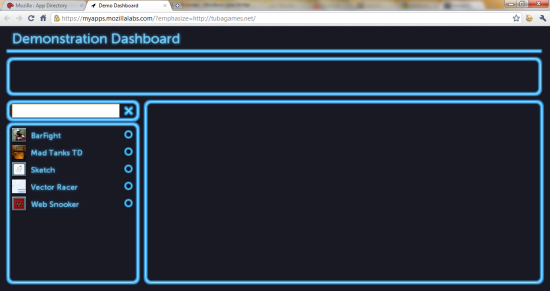 As you can see, I have installed quite a few apps and currently trying them in Google Chrome. One of my favorite apps is this Addictive word type flash game called Ztype. [watch the video on our YouTube channel ]

An Overview Of Mozilla Web Apps And The Mozilla App Store

The following video gives a rough idea of how web applications from Mozilla web app store work and whats in store in the coming days:

If you are a developer and want to develop and submit apps to Mozilla’s web store, here are a few links you should consider bookmarking:

More information is available on the Mozilla Labs blog