How to Record Android Screen without Root

Android is one of the most feature-rich mobile platforms, which is being used by millions of people from across the globe. People use Android since there are hundreds of mobiles those are running Android. From $70 to $700 – you can find different Android mobile in that ranges. However, suppose, you want to record Android screen to do something.

For instance, let’s assume that you are a YouTuber and you want to upload some how-to guide videos to YouTube so that your viewers can get a solution quickly. Alternatively, suppose you have scored amazing in a game and you want to show that to all the people via YouTube or any other sites. Or, you just want to record screen to do something on your own.

However, there is no such option in Camera or anywhere that can let you record screen fluently. The camera will just assist you to capture images or record videos. But, there is no such function to record the screen.

To solve this problem here is a simple app that will aid you to record Android screen without root. There are plenty of apps on Google Play Store but most of them require root access. However, this simple application can actually record your screen for as long as you want without any root access. Therefore, anybody can just download this app and start recording the screen – no matter what you do, everything will be recorded.

The user interface of AZ Screen Recorder is pretty good, neat & clean. All the features are well managed and you can find them one by one on the same screen. You can manage the following things,

All these things are available in the free version of AZ Screen Recorder.

This is very easy to setup and the recording procedure is simple as well. After opening this app, you can find a screen something like the following picture. The first thing you have to do is to change the stop option. You can get various options to stop a recording. Just tap on Stop options button and select one that you wish.

Then, you can find a bar that looks like this, 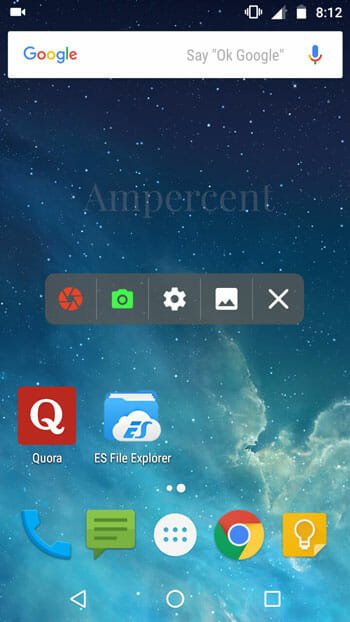 The very first red button will help you to start the recording. After tapping on it, it will give you three second to get ready. Following that, you can expand your status bar and hit the STOP button to stop the recording (according to the default setup). After that, you will get EDIT, DELETE and Share buttons those will do as they said. However, to edit a video, you might have to download another app.

Otherwise, you can find your recorded video in the gallery.

That’s it! This is as simple as said. If you like, you can download AZ Screen Recorder from here.