Record A Video Of Your Android Screen Using Screencast Recorder

While there are quite a good number of free as well as paid applications available for capturing a screenshot of your Android phone, but when it comes to recording a video of Android screen – you have fewer options.

However, there can be situations when you may want to record a video of your Android screen, without having to use a desktop screen recording tool or install the Android SDK on your computer. You want a universal and always working solution for recording screen video on Android and this guide will help you do just that.

From the past couple of days, I have been using a few screen recording applications on my Android phone and after testing a lot, I can conclude that Screencast recorder is one of the best of the lot.

Screencast recorder is a free application for Android, which lets you record a video of your Android screen, directly from the Android device. You can install it on any Android phone or tablet running Android 2.2 or later and use it to create MPEG-4 screencasts without any bells and whistles. Here are the steps that needs to be done:

1. First make sure you have rooted your Android phone or tablet device where you would be recording the screencast. The application will work only on rooted phones and you will need to grant super user permissions to the application, before being able to record a video.

2. Both paid and free version of the app are available in the Android market. The free version of the app lets you record a screencast of up to 30 seconds in length while the paid version has no such limitation on the length of the video. The paid version comes at the cost of $2.99, which is really very cheap, compared to the features it provides.

3. When the application is installed, hit the record button and the app will automatically start recording your Android screen. Here is a small video recording I made from my Android phone, using the free version of Screencast recorder app:

4. Before beginning your screencast, be sure to check the application preferences and choose the settings and output quality of your video. The app lets you choose and customize the following settings: 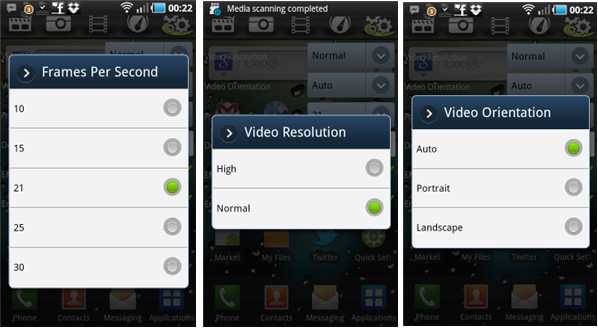 Overall, this is one of the best and free way to record a video of Android screen, without having to go through geeky procedures or use an external camera for recording your Android screen. Now there are a couple of situations when you might want to use this application:

1. Your 8 year old son is extremely tech savvy and wants to play with your phone every other hour. Before letting him use it, it might be a good idea to start the video recording application in the background and keep a close eye on the stuff he is addicted to, the files he is opening and the sites he is browsing from Android. This is another way of implementing parental control on Android, other than restricting access to specific applications and games of your choice.

2. You have messed something up and need help from someone who is an expert. Rather than typing a long email of your problem, it makes perfect sense to record a video of your Android phone and send him the video file as an email attachment. Your friend will be able to see your Android screen and it would be easier for him to help you and solve the problem you want him to fix.

3. You write a blog and frequently review Android tutorials, applications and other tips and tricks on your website. In addition to textual content, won’t it be nice if you can add some cool videos and show step by step details to your readers?

Whatever, might be the purpose, this app is certainly one of the easiest and free way to record a video screencast of your Android phone or tablet device. Give this a try!