How to Show App List in Control Center for iOS

Control Center is truly powerful feature of iOS 7 and later versions of iOS that assists you to do various things faster. It mainly helps users to open network related settings (WiFi, Bluetooth), music player and some more including Camera, Torch and so on. In other words, you can use Control Center to do things quicker.

For instance, if you want to enable to disable WiFi, you can just swipe from bottom to top to open Control Center and tap on the respective button to toggle the settings. The same thing is applicable for Bluetooth, Flight Mode, Camera, Calculator, Torch etc. The music player related buttons aid users to play/pause the music and play forward. On the other hand, you can also change the screen brightness using this Control Center.

Although, it shows so many things to help users to do numerous things quicker, yet, it is in need of another feature. It must show the recent apps or some predefined apps so that you can open them without going through the menu. If you have many apps in your device and wish to open an app frequently, you will have to waste so much time to do so. It becomes more time wasting job when you have to open more than one app.

To eliminate this issue, here are two simple tweaks that will let you show recently opened app list in Control Center so that you can open them directly. After installing any one of them, you would be able to pin your favorite apps in the Control Center. Following that, whenever you open Control Center, you will get them.

Axial is a free, small yet very effective Cydia tweak that is available for iOS 8. You can pin any number of apps in the Control Center. This is possible to pin stock Settings app, Notes, Mail, Message, Phone or whatever you want. The most beautiful thing is it shows unread notification number on the icon so that you can open and read them accordingly.

It has few couple of options to run it as per your wish. Here are some of the useful settings.

Show In Lockscreen – You know that this is possible to open Control Center from Lock Screen as well. However, if you do not want to open your favorite or pinned apps from the Lockscreen through Control Center, you can just disable it from the Axial settings.

Apps Selection – It does what it implies. That means, you can select apps that you want to get in Control Center. You can select any app or any settings you want. On the other hand, you can also choose the number of apps you want to show in a column or in a row. If you want to put more apps than 4, this is obviously suggested to choose 3 columns and 2 rows. 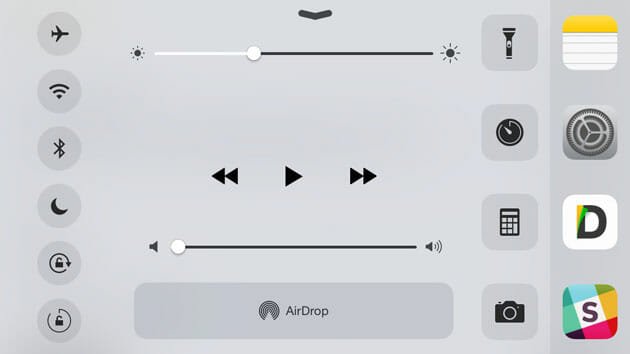 It doesn’t come with a lot of settings but the single option is enough to make this app more popular among busy people. You can open those pinned apps, close them and do whatever you want right from Control Center. After enabling this Cydia tweak, you will get a change like this,

From this window, you would be able to open them.

Both of these apps are much useful – their workflows are different though. Keek adds most recent apps and Axial adds user-defined apps. But, they are equally useful.