How to Use Siri from Spotlight on iOS 8+

iOS users have some awesome features such as Spotlight, Siri and many more. Today I am going to introduce a great trick that will let you use Siri from Spotlight on your iOS device.

Spotlight is a useful feature of iOS as well as Mac that helps users to find any particular content from the iDevice. You can find almost all kind of files and more other things. The latest Spotlight, which is included in iOS 8, is really productive. You can use this Spotlight search to find anything offline and online. For instance, if you make a search for a music band name or popular person’s name, it will automatically provide information from Wikipedia.

On the other hand, Siri is one of the smartest digital assistants that is a part of iOS. You can get Siri in almost all latest iPhones and iOS versions. Siri is much smarter than Cortana and Google Now. You can use Siri to do almost anything via voice command. This is very simple and not much time-consuming.

However, today’s trick will aid you to use Siri from Spotlight on iOS 8 and later versions using a Jailbreak tweak. You know that Jailbreak has become the most common terms in iOS app development and enhancement.

Let’s assume that you are making a plan for a walk. Obviously, you have to check the weather as well so that your walk won’t be interrupted by the bad weather. At such moment, you can easily use this Jailbreak tweak to open Siri right from Spotlight search. You can also set give command to Siri right from the Spotlight app. This is where it stands out from the crowd.

How to use Siri from Spotlight?

This is however possible with SpotlightSiri, which is available in BigBoss repository. This JailBreak tweak is available at free of cost for iOS 8 and all later versions.

The most exciting thing is you do not have to set it up. In fact, it has no option to make any change internally. All you have to do is just install the JailBreak tweak. That’s all! After that, you can start using and giving command to Siri right from Spotlight search. This is as simple as said.

To do so, just open Spotlight search and give a command like

Siri set up an alarm for 6am 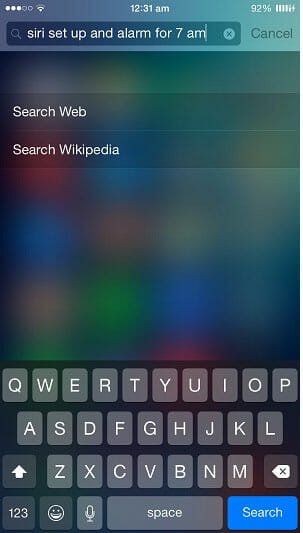 Important Note: You must have to enter Siri as the prefix of any command. Otherwise, you cannot use SpotlightSiri on your iPhone.

Although, you can setup alarm faster and easily even when you are using Spotlight or anything else. But, this particular JailBreak tweak is useful when you will need to use more other features or utilize Siri.