How To Use Your Smartphone Without Even Touching The Screen

Taptivate is an unusual app that enables you to use your smartphone without touching it’s screen. This is done with the help of inventive gestures or voice commands, which may be either predefined or user oriented. Simple actions like tapping your phone to your chest can be used to call someone on your speedial or start voice recognition. On the other hand, voice commands can launch a target app, send someone a message or change the settings of the phone to name a few. As of now Taptivate is available only on Google play.

Once you download and install the free version of the app on your Android, the very first thing to do is to watch the demo videos on how to use the Tap and the Shake features. Links to these videos are available on the Home menu. Nonetheless, you can also follow this tutorial to learn how to use these features. 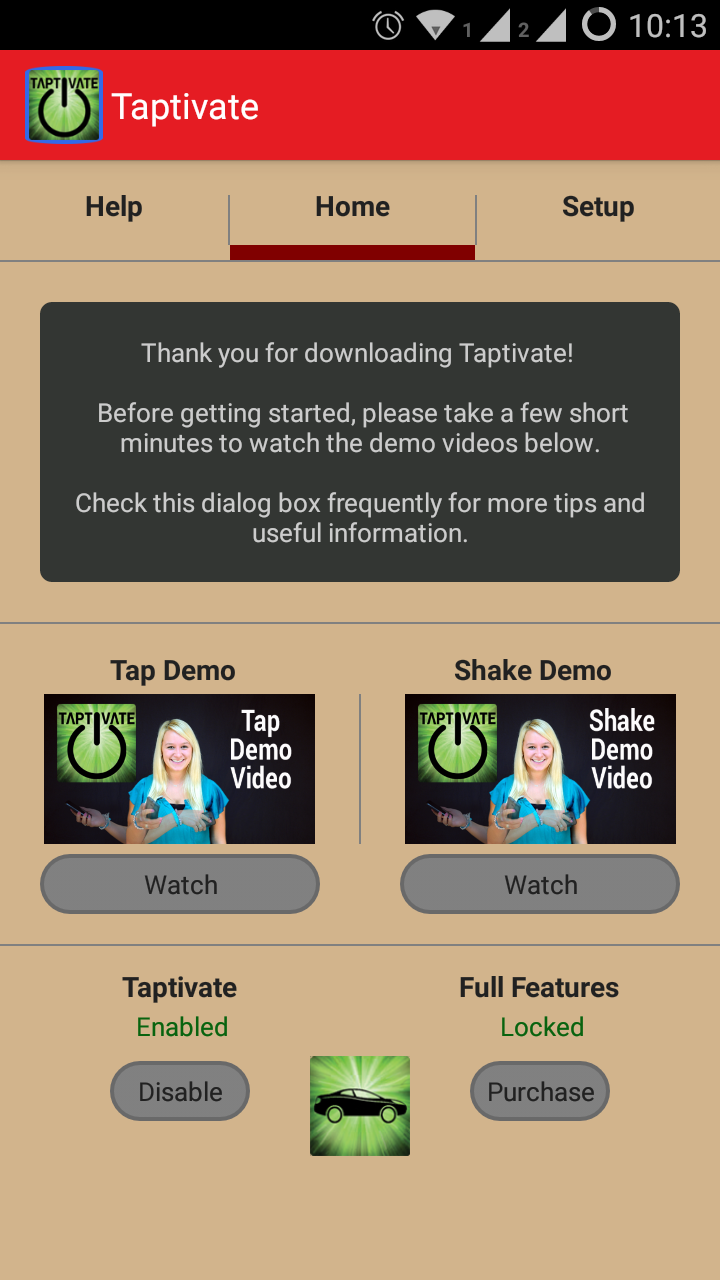 There are 4 basic features that the app offers –

Using a combination of these attributes, you can personalize the app behavior effectively. Now let’s see how to set them up.

How to set up Chest Tapping

Chest tapping is a feature that carries out a particular function every time you pick up the phone and tap it to your chest. Upto 4 taps can be used to assign to different tasks which may look somewhat like these – 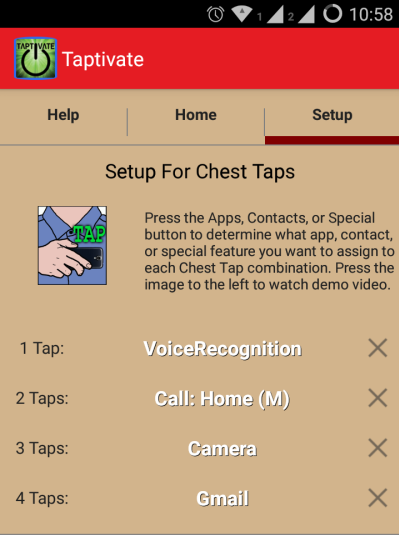 How to set up Directional Shake

This feature of Taptivate is similar to the previous one, but instead of tapping, it makes use of shaking. Functions can be carried out simply by shaking the phone in a particular direction. This further works in 3 ways –

Furthermore, analogous to multiple chest taps, multiple directional shakes can also be set up. Please note that unlike the previous feature, this is a paid one.

How to set up Custom Voice Commands

This is also a paid feature of the app that offers to access other apps and services through simple voice commands. For example, the facebook app can be launched just by saying “Launch Facebook”. Or saying “bluetooth” will enable the bluetooth of your phone. You can set this up by simply tapping on ‘Edit Word’ and saying the words you want to set as the keyword to access that function. This will pop up a dialog box containing the word you spoke. If the word is correct, pressing on the assign button will finish the set up. The paid version offers to set upto 10 different words of your choice. 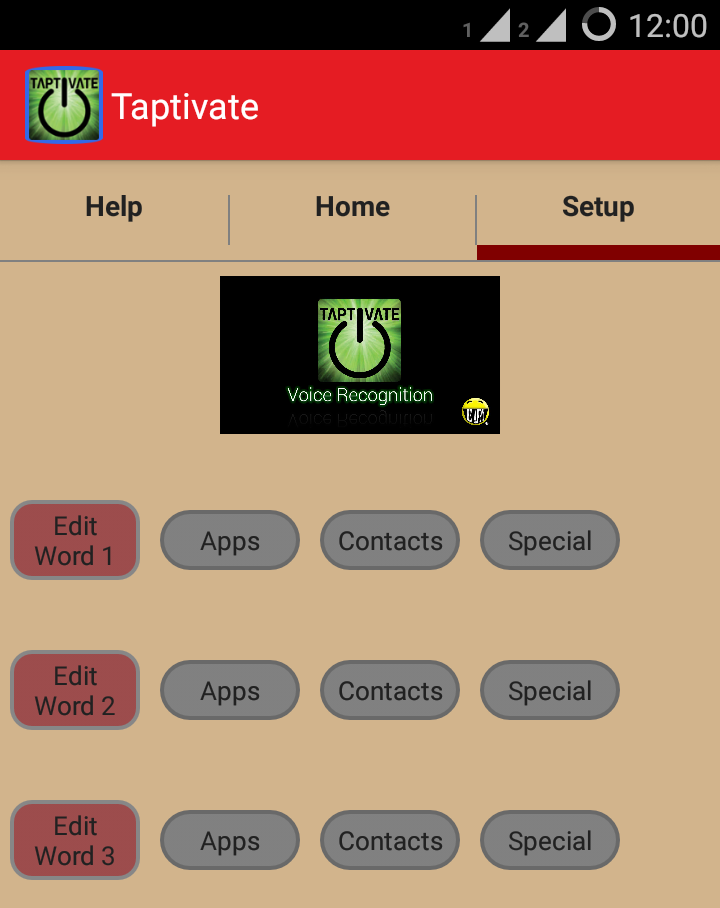 Taptivate also offers an excellent Car Mode which makes it extremely easy to use your phone while you drive your car. The car mode can be accessed through the small car button right on the home screen of the app. The functions set in the Chest Tapping feature will sit on the top of the screen while all the set shakes will be turned into buttons sitting at the bottom. This enables safe driving and productivity at the same time. 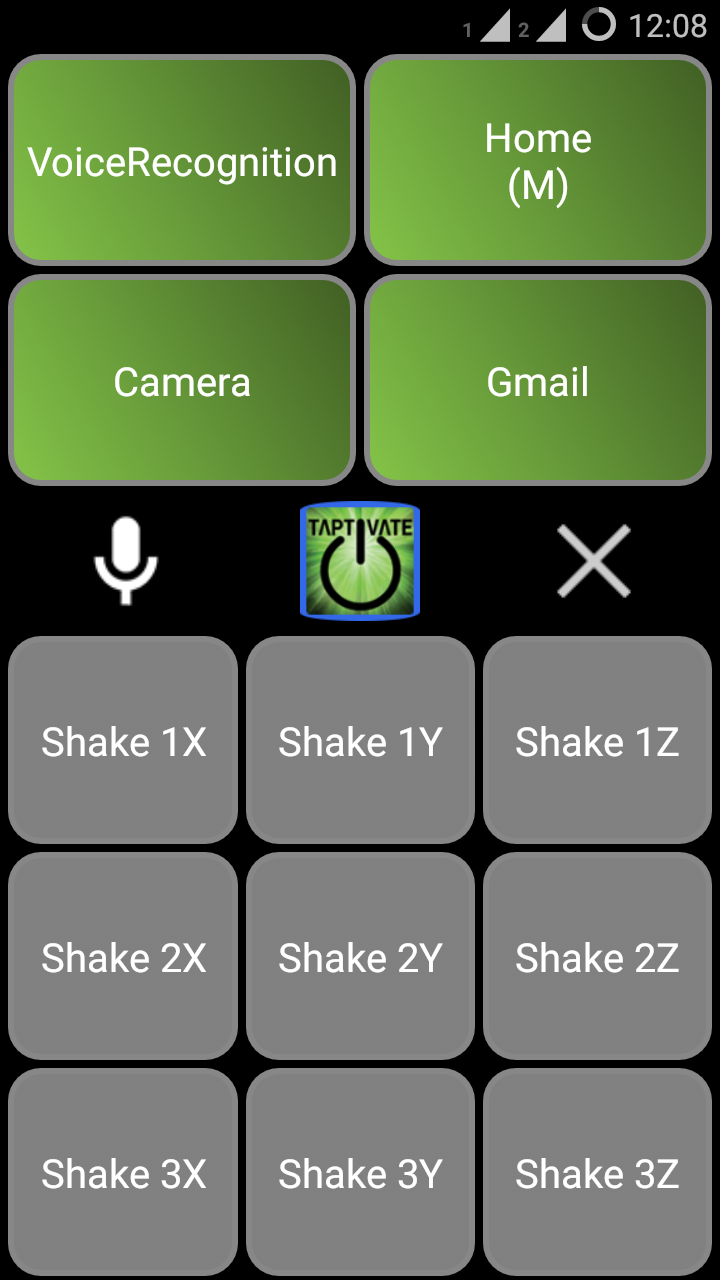 I sometimes found the app missing the taps while using the free version. Occasionally it mixes the number of chest taps with other set functions if not tapped properly. I have not used the paid version of the app but I think similar problems can emerge with the Directional Shake feature as well. It is difficult in practical life to shake the phone with perfection along a particular axis. On the other hand, the car mode of the app is extremely useful while driving. Also the app did comparatively well with single and double taps and therefore these functions can be used to quickly call a regular contact as well as change settings without even touching your screen. Taptivate surely has potential and relevant future updates can even convert it into a mainstream app.