Best 5 Apps for Google Cardboard You Should Try Today 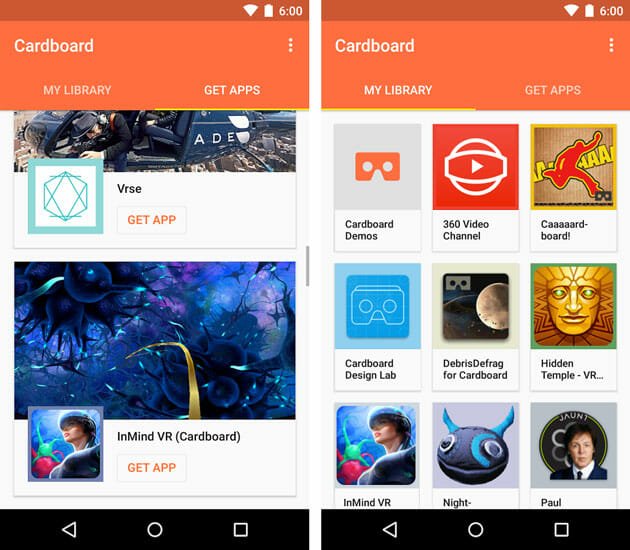 When you need to manage everything in your Cardboard settings, who can do the job better than the official Cardboard app developed by Google itself for the Cardboard users. You can have Earth, Tour Guide, My Videos, Exhibit, Photo Sphere and Arctic Journey, etc. inside this app. The overall functionality of Cardboard app is not bad, and there is no need to worry about the compatibility since this is available for Android 4.1 and later version. In simple words, you can upgrade your VR experience with the help of this app. Download

GoPro VR is yet another excellent app for Google Cardboard that is available for Android 4.1 and later version. There are many things you may not be able to experience. Having said that, GoPro VR will allow you to do all this stuff using Google Cardboard.  You can render video up to 60fps, get a pixel-precise projection, 360-degree view and much more in this app. On mobile, you can get several categories to manage the show that you want to watch in Cardboard. Download

If you do not have any experience of talking in front of one hundred or even ten people in a conference room or meeting, Public Speaking VR is probably the best option for you to test it. You can get an excellent interface of individuals who will listen to your speech, and on the other hand, you can deliver your speech as per your wish. You can get a 360-degree view of all the given environment, sound distraction, animated audience and much more. Download

This is your best companion when you have a Google Cardboard or any other virtual headset. Recently YouTube launched 360-degree videos, and you can experience them better with a virtual headset like Google Cardboard. You should not get any compatibility since this app is being managed by Google itself. Talking about the functionality, there is nothing to mention since you already know them all. Anyway, you can get loads of videos related to anything. Download

Cardboard Camera is another Google developed Android app compatible with Android 4.1 and later version. It lets you capture images in a 360-degree view that makes the image even better and different. There are many places like hill station, where we often want to capture a panorama. However, sometimes it may not work as good as it should be. At such moments, you can head over to Cardboard Camera. Capturing and sharing images via this app is as simple as said. Download

There are many other apps for Google Cardboard that you can download on your mobile. Try these out and do let us know the most favorite app that you use every day.