WiFi users generally do not apprehend what a limited bandwidth user often face. If you use Cellular data on your mobile, which usually come with limited bandwidth, you may have fallen into trouble multiple times for over usage. To update a couple of apps, download some files and browser through Chrome or Firefox, today’s smart mobiles consume a lot of memory.

However, if you want to monitor mobile data usage to know whether you are actually consuming so much memory or your apps are ruining your bandwidth in the background, here are some apps and tricks. You can use these following tools on Android, iOS and Windows phone.

The in-built checker is the best tool to monitor mobile data usage. You can find a data usage checker in almost all platforms including Android, iOS as well as Windows Phone. 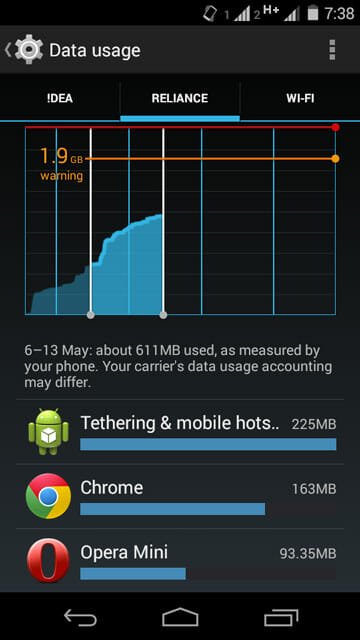 Android has the best data usage checker tool, which tracks your data usage in every second. You can find the details of each MB using it. This is possible to check data usage by all the apps, games, browser etc. To open the Data Usage checker of Android, just click on Settings and Data Usage respectively. After that, you will get a comprehensive list of all application with usage data. 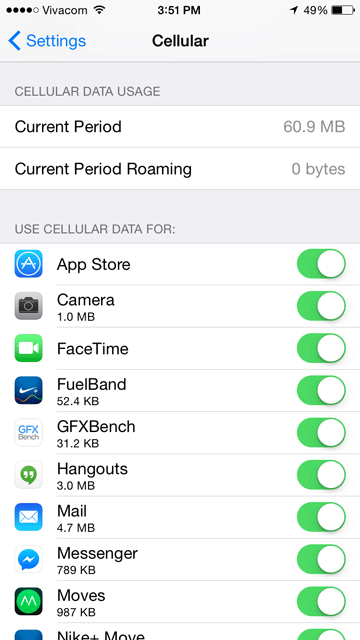 iOS’ native data usage checker is available for almost all versions – just like Android. It works quite similar to its rival (Android). You can check all data usage, current period, lifetime period, block background data usage by apps and so on. To open the data usage checker on iOS, just open Settings >> General >> Usage >> Cellular Usage. After that, you will get all apps with used memory. 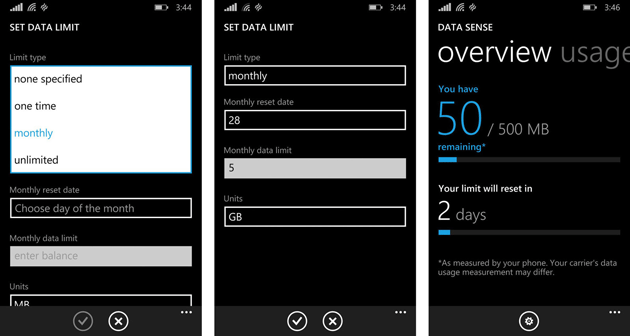 Windows Phone 8 and later version has a great tool called Data Sense. Data Sense lets users to monitor data usage. Not only data usage, it can also set limitation according to date and bandwidth. A live tile can be placed on the start screen so that you can check the remaining data and used data.

If you need more options to monitor mobile data usage, here are some useful apps for Android, iOS and Windows Phone.

Being available for Android 2.3 or later version and iOS 7.0+, My Data Manager is playing a vital role to measure data usage and limit your connection so that you do not need to pay extra bill in every month. This free application comes with several helpful features, what help you to

The simple user interface makes it even better for users to track bandwidth distribution on Android and iOS mobile. If you are going to use this app, you must know that My Data Manager will not work if you move it to SD Card.

Although, the number of features is much lower of My Data Manager, but still, Data Monitor is much popular among many limited data users and among them, who always try to track every MB of their data.

Data Monitor is available for Android 4.0 and later version. It can measure your Cellular data as well as WiFi connection usage from one place. Generally, this app is available for free on Google Play but if you want to remove all third party advertisements and unlock a couple of features, you may have to purchase it by spending $2-$5.

It provides all the options what are usually available in other regular data usage checker. Apart from that, you will get a real time data transfer checker on your screen. It will assist you to check the incoming and outgoing data transfer rate right from any screen.

This is a different initiative by Onavo to stop paying extra bill for over data usage. Onavo Count counts every KB of your data connection to notify you for over usage. No matter whether your overall usage has been crossed the limit or any app has used more than what it should be, you will get warning message by Onavo Count.

You need to setup monthly cap and billing cycle so that Onavo Count can measure your data usage and warn you. Alike My Data Manager and Data Monitor, you will be able to monitor Cellular data usage as well as WiFi connection. 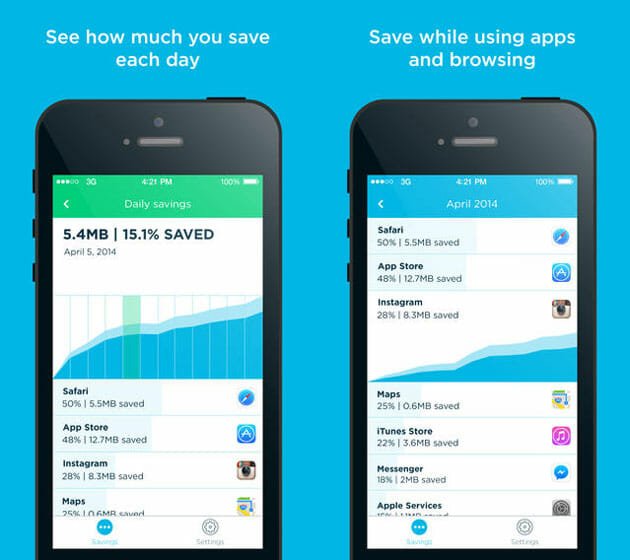 Onavo Count and Onavo Extend are very similar in terms of facilities and available features. Onavo Extend is available for iOS 6.0 and later version. It has a totally unique feature, what is generally available in Google Chrome for Android. It can speed up browsing by enabling ‘Lazy Load’. That means images will be appeared when you will scroll down on a webpage. Apart from that, this is possible to switch to WiFi connection from Cellular data whenever it is available for using.

Besides this, you would be able to check the data usage by every application. However, it does not calculate data usage as other similar apps do. It will just show total data usage and percentage according to app application. Rest of the calculations need to be done by you.

For data management, visual monitoring, and real time data checking, Data Usage app is probably the best tool for iOS, which is available for iOS 7.0 and later version. When Onavo Extend extends your data usage capacity by compressing pages, Data Usage app will let you count every KB by setting up alarm.

Not only alarm, but also you can place the widget to check the data usage quickly. Alike other regular data monitors, you can measure Cellular as well as WiFi data using Data Usage app. The widget will help you to monitor data usage by percentage. On the other hand, this app will change its color automatically, when you cross the limit. This is how it excels.

You can check all the usage including Today’s usage, Total usage, Projected use and so on. 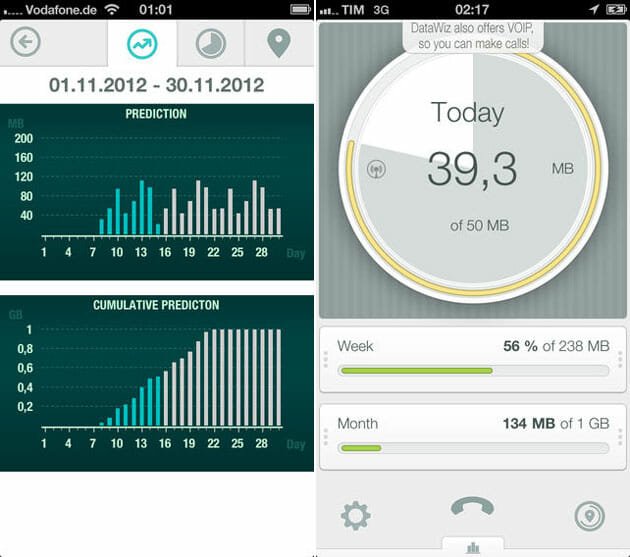 DataWiz has the most beautiful design with tons of useful features. This is possible to measure memory usage by day, week, month etc. This app is compatible with iOS 5.0 and alter version. DataWiz offers the following features to the users,

Not only these four features, but also DataWiz offers some other options to understand how much memory is being consumed by any app etc. The UI looks good and it makes it even better. As a free application, it provides more than what others do as a paid version. 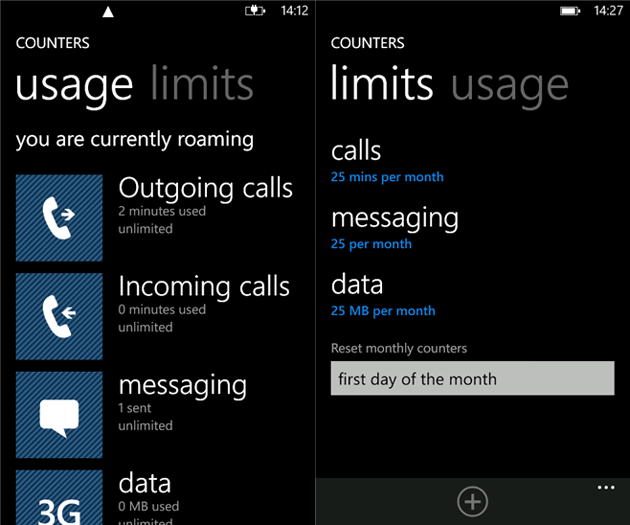 Generally, Data Sense has almost all features for Windows Phone. However, if you still need more options to monitor mobile data usage, Counters may help you. It works with Windows Phone 7.5 and Windows Phone 8. Apart from this drawback, the app is actually very useful.

You can track calls, SMS as well as internet data usage using Counters. Counters also help you to limit bandwidth by month and memory. Although, it doesn’t provide any option to check data usage by apps, yet, it is popular because of sleek design and handy options.

It comes with simplest user interface to setup the limitations. You can limit the following things,

Apart from these, you will get a small text about data usage.

Although, the built-in tool is enough to monitor mobile data usage, but still there are some people, who always want more option to do everything. Hope these apps would help you to monitor your data usage smoothly.

Here are some other tools to track internet data usage.