Carbon For Twitter Released On Play Store; Is It Worth The Wait?

The much-awaited Carbon For Twitter app was finally released on the Google Play Store. If you haven’t heard of this app before, then it not your fault. Carbon was an extremely popular Twitter app for the webOS. Sadly, the app was killed, due to the sudden death of webOS. Back in 2011, the developers of Carbon announced their plans to launch this awesome app for the Android Operating System. Later in 2012, the video preview was released and the developers announced that Carbon will be available for free on the Play Store starting from July 2012. However, the app got delayed and delayed for unknown reasons. 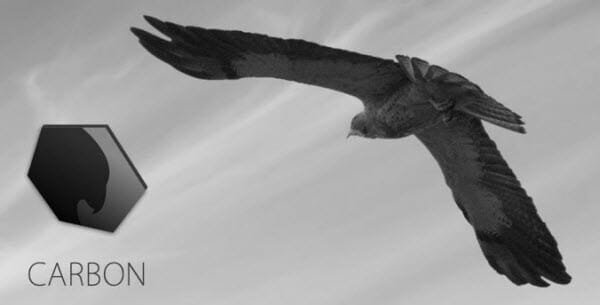 After 15 months from its announcement, the developers, Dots and Lines, finally released the Carbon for Twitter app on the Play Store. There are number of Twitter clients for Android devices. Some of them works as advertised while the others are not up to the mark. Will Carbon for Twitter survive in a world where Twitter is already killing third-party clients and apps like Falcon Pro has already achieved the next level of success? Read on to find out whether Carbon for Twitter is worth the wait!

As the name suggest, Carbon for Twitter comes with a dark black theme with white and grey colors used in timeline and throughout the app. As soon as you open the app, you will be greeted with a hawk logo on the start screen as shown below. After that, you will need to add your account by following the same procedure as in any other app. 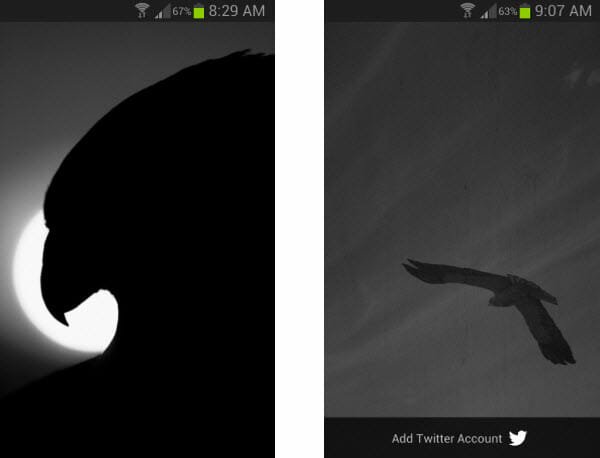 The gorgeous timeline is displayed once you have logged in with your Twitter account. Around 4-5 tweets will be shown on the screen depending on the size of the tweet and the media attached. If you are curious to know which Twitter client was used for a particular tweet, then all you have to do is just tap the tweet on your timeline. Tapping on the individual tweet will allow you to view, reply or favorite the particular tweet. You can also share the tweet via other apps installed on your Android device. If you don’t want these options, then just long press any tweet to get the basic options – reply, quote, retweet and favorite. 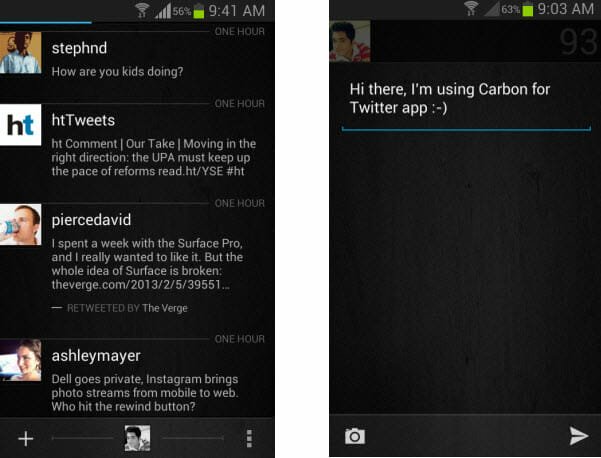 There is also a great pull to refresh feature, which you have seen in every social networking app out there. But, Carbon for Twitter brings an unique animation while you pull to refresh your timeline. Along with that, the number of new tweets are shown on the top of the screen. If you would like to know more about the tweeple you are following, then just click on his/her display pic and you would get the required stats. On the left side, you will find their number of tweets, friends, followers, lists, etc. While on the right side, Carbon will display the option to direct message or add the user to your lists as well as it will let you know whether the selected user is following you or not. 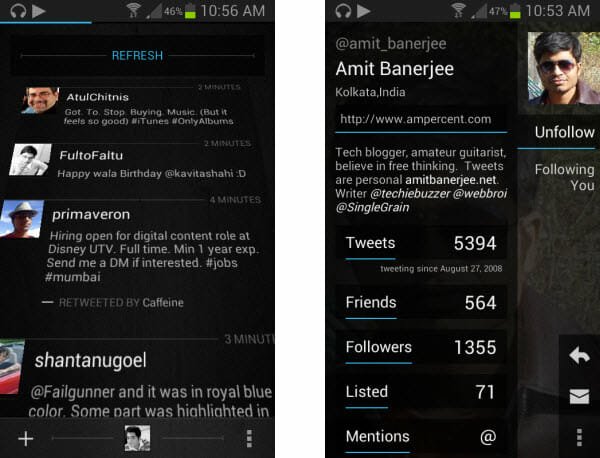 To compose a tweet, just click on the “+” button on the bottom of the app. You can easily type on the large space allotted for the same. The remaining characters will be displayed on the top. You can also attach a picture to your tweet. Carbon allows you to take a picture from camera, select the last clicked image or manually choose an image from the gallery. If you want to get rid of some topics or current events, then you can use the amazing filter options. All you have to do is just hit the menu option from the bottom and select filters, which is placed right above the settings. Carbon allows you to filter a tweets from a particular person, hashtag or keyword.

Sadly, Carbon for Twitter does not automatically refreshes your timeline. Each and every single time you will need to open the app and manually refresh your timeline. This is a big let down from such a promising app. Even the notifications are not properly implemented on this app. You will be notified for mentions and direct messages, however the app checks for updates every 15 minutes and there is no other way to change the frequency of refreshes. Moreover, there is not support for Android tablets at the moment. This is the first release, so you can expect the developers to rectify all of the errors in the coming days. If you don’t like the blue hue in most of the Twitter clients and looking for an amazing app with an awesome dark theme, then your search comes to an end. Carbon for Twitter is definitely worth the wait, however it won’t replace Falcon Pro on my device until all the problems are taken care of.