Easy App Switcher: The Fastest Way to Switch between Apps on Android

In the never-ending war between Android and iOS, you can find various similarities and differences. Although, this is not a similarity but it is certainly a difference between these two operating systems. iOS doesn’t come with a huge RAM like Android. This is because it closes the useless processes automatically but Android cannot do so. That is why you can find a huge RAM in Android mobiles.

As Android stores all the background processes, it makes easier for anybody to switch from any app or any other app. For example, you have opened 10 apps and you want to switch from 1st to 10th. This is easily possible. Although, iOS helps users to do almost the same thing but the number of recently opened apps is pretty low.

Anyway, if you want to switch from current screen to any other screen, you can just tap on the RECENT button and select the opened app. This is as simple as said. But, suppose, you have to copy something from one app to another and you do not have much time. Therefore, the RECENT button will consume more time than this trick. Here is a simple app that will let you switch between apps on Android within moments. A great mechanism works in the background and this is why it works fluently on Android mobiles.

Easy App Switcher: The Fastest Way to Switch between Apps on Android

This is actually very easy to app. After installation, you can find a floating bubble on your screen. If you tap on that, you will be switched to the last opened app. The processes will be continued until you come across to the very first opened app. This is something like Android N’s RECENT button. On the other hand, you will not have to open that manually alike the default method. Instead, you will just have to tap on the corresponding button and the very last app will be opened automatically. You can find the last done thing on the last opened app. This works like pause and resume.

Easy App Switch can be downloaded for free but you need Android 4.0 and later version to run it. Apart from opening the recent app, you can also set few couple of favorite apps. Suppose, you often use one or two apps or you HAVE to use one or two app. A normal user to open the app drawer and then open that. But, if you have Easy App Switcher, you can open then right from the same floating button. It is actually a 2-in-1 button and both of the features are mentioned above.

This is very easy to set up Easy App Switcher as it doesn’t contain any complicated feature. The very first thing you have to do is to allow it to draw over other apps and allow it to be used. These two options will be appeared on Android Marshmallow it has maximum security than other versions. If you are using Android Lollipop or earlier version, you may not get these options.

Following that, the subsequent screen will be appeared. 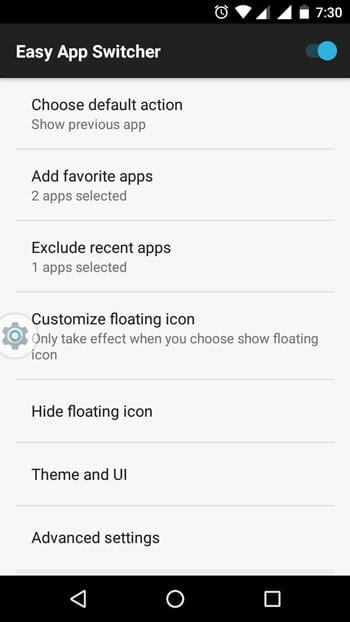 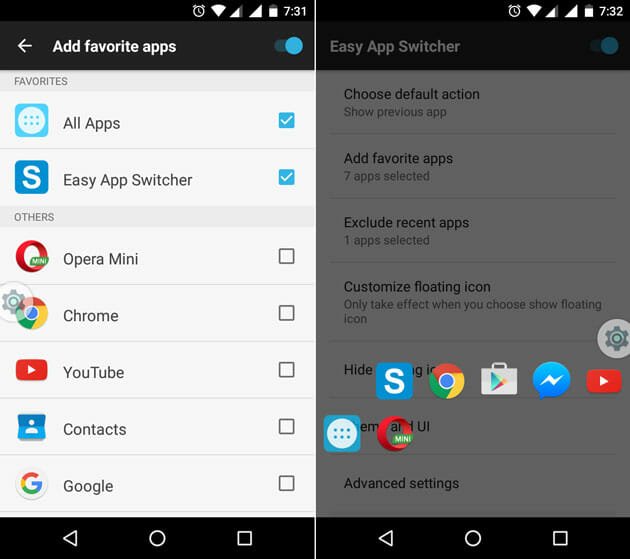 That’s it! Hope this little software can help you a lot.