Find People On Google Plus: An Online People Directory Of Google Plus Users

Google Plus is the current buzz word and this new social gig from Google has taken the web by surprise. Google Plus is still available on a field trial basis but thousands of users have already created their Google Plus profile which shows that Google has done it right this time, when compared to Google Buzz and Google Wave.

Recently, Google has decided to make all Google profiles public by July 31st which means, Google plus will eventually act as an online people search directory.

For example: Type in any name on the search box of Google Plus and Google will show you people suggestions from their database. These people search results are shown from an index of Google profiles and clicking a result will take you to the public Google plus profile page of the person in question.

Sure you won’t be able to see the Google Plus posts of the user but you can always read the profile bio and other information available on the “about” page.

Find People On Plus: A People Search Directory Of Google Plus Users

Until now, the site has indexed close to 1 million Google Plus profiles and more profiles are being added as and when they are discovered.

Apart from indexing and organizing people results of Google Plus users, the site offers a few handy shortcuts. You can quickly figure out whether a specific person who has a Google plus profile also maintains a Facebook or Twitter account or not, what’s his gender and how many followers he has on Google Plus. So if there are multiple results for the same search, you can quickly sort Google Plus profiles according to relevance.

The site will automatically detect the current location of the user and will suggest similar people who reside near his location. For example: If you find the Google Plus profile of a person living in New York, the site will offer suggestions on similar users who also reside in New York and are present in one or more circle of the person in question.

Statistics of Google Plus Users Across The Globe

However, what caught my attention is the statistics and visitor demographics of Google Plus profiles across the globe. Find people on plus provides some interesting insights on the type of users who have joined Google Plus so far. 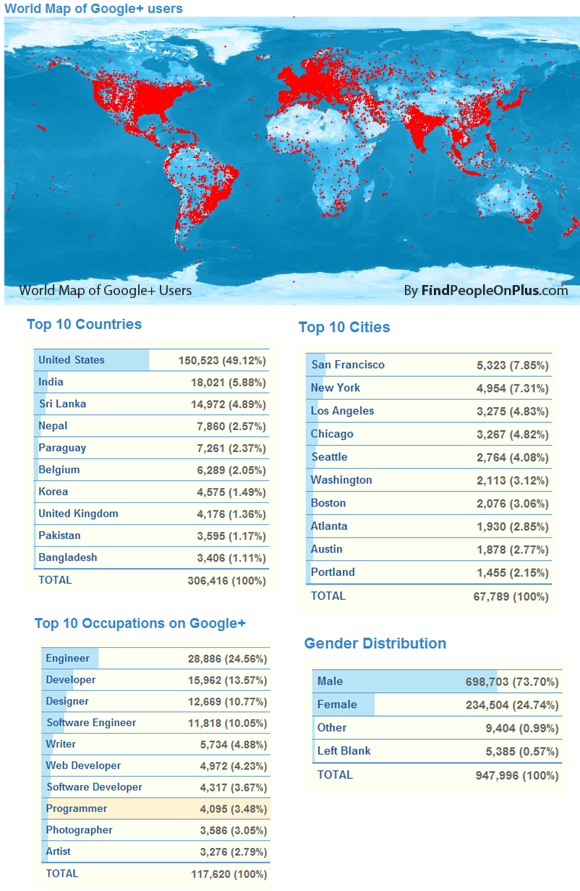 According to the report:

3. We have previously compared the male – female ratio in social networks but surprisingly, Google Plus is an exception and has recorded a high sign up volume from male users and a negligible amount from females. The male female ratio of Google Plus profiles is 3:1, i.e for every female user signing up for a Google Plus account, there are 3 male users.

4. Maximum number of Google Plus signups came from United States of America (50%) while India and Sri Lanka recorded 6% and 5% respectively.

5. The professional background of most Google Plus users are more inclined towards the tech domain. There are more Engineers, Web developers and design professionals on Google Plus, when compared to musicians and artists. But this figure should change, once Google Plus is made available for everyone. I guess “students” will top the chart then.