The cloud wars has just heated up a little more. Necessity of the cloud storage was not something too young. Skydrive, Google Docs has long been there. It only became exigence as soon as Dropbox went out. Features like syncing, offline editing and myriad others has made the shift (from conventional storage to cloud storage) even more obvious. Now that the much anticipated Google Drive is here, it’s time for getting some thinking done before you jump into one. 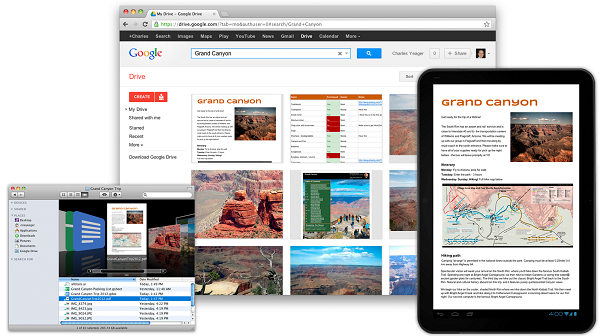 The long mythical Google Drive has finally landed among us although availability is limited (at the time of writing). The new service is built around the already popular tool Google Docs. Drive incorporates all the basic features you already enjoyed with the online document editing product for the search giant. With the advent of Drive, however, some more awaited (anticipated as well) features are added. Most important of them all is the sync feature, which has been a prerequisite since Dropbox was made popular. Here are the most important ones summed up in a list.

WEB: I have always been an admirer of the minimalist design of Google. And off late if you have visited the Google Docs, you’ll not be much surprised with the web interface the service offers. Search bar on top, menu on the left and list of files/docs to the right. The plain old 2 column layout is clean and easily comprehensible by any average user. You can create or upload docs/files right away.

DESKTOP: Google Drive Sync client is available for Windows and Mac users. You download and install it. That’s to it. You will have a Google Drive folder added on your desktop or anywhere you opt. The integration however is not as seamless as it is in the case of Dropbox. However the drag and drop option is quite a breather as you do not need to manually upload each and every file to the cloud with the web interface like you have to do in case of some players in the cloud storage market. Copy any file to your Google Drive folder and it will be synced automatically with the cloud. This indeed is a hassle free experience although not a unique one. The Linux users can use Nautilus to access Google Drive on your computers.

MOBILE: The iOS users will still have to wait for some time before the iOS app for Google Drive is rolled out. However, Google Play has already  the app listed in the market. The Android app for Google Drive is just an update pushed to Google Docs for Android. The interface is pretty basic and do not deviate much from the Docs app. You can save documents for offline use or even save them to Dropbox or SkyDrive instead. Try saving a music file or a PDF offline, the app gives a miss unless you are willing to mail yourself the file as an attachment.

Integration With Other Google Products 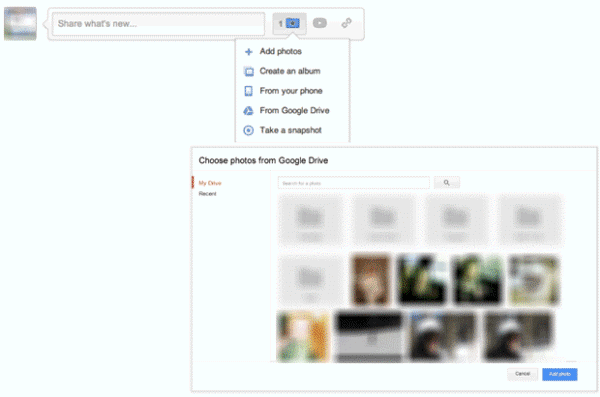 As we had seen in earlier cases, Google is keen on creating a complete experience for its users. Be it search integration of Google Plus or the unified privacy terms Google wants everything under the same umbrella. Google Drive is also not an exception to this rule. Google Plus and Gmail has now an option to add files directly from the Google Drive. The reach is going to increase with days to come as has been the trend with Google products that tend to start off on a lower note and gradually expanding in features over time. Speculations about the Google Drive files being included in search is already doing the rounds.

The SDK for Google Drive is already out and the Chrome web store is already filled with apps that integrates the app into their own projects. The increasing number of apps will certainly promote the product to a wider audience and hopefully provide the traction the new Drive needs. MinMeiser, Hellofax, Lulu to name a few are the apps you can try out pronto.

Privacy is something that has put the tech giant into recurring trouble. The new product has yet again prompted a similar controversy regarding the exclusivity of the files you store on Google Drive. The Google’s Terms of Service clearly states,

Your Content in our Services: When you upload or otherwise submit content to our Services, you give Google (and those we work with) a worldwide licence to use, host, store, reproduce, modify, create derivative works (such as those resulting from translations, adaptations or other changes that we make so that your content works better with our Services), communicate, publish, publicly perform, publicly display and distribute such content.

Now if that was scary listen to what Google so proudly introduces as improved search with OCR,

Search by keyword and filter by file type, owner and more. Drive can even recognize text in scanned documents using Optical Character Recognition (OCR) technology. Let’s say you upload a scanned image of an old newspaper clipping. You can search for a word from the text of the actual article. We also use image recognition so that if you drag and drop photos from your Grand Canyon trip into Drive, you can later search for [grand canyon] and photos of its gorges should pop up. This technology is still in its early stages, and we expect it to get better over time.

This might sound like a fairy tale where your genie is at your mercy to search for anything you wish for. Think again, this also means Google is aware of (or is trying real hard to do so) what or whose pictures you have been clicking apart from the innocent texts that they were already reading. Does that send a shiver down your spine? In this age where every data about you is or will be monetized, this certainly seems to be fact we are all used to. But there can serious implications and is strictly an intrusion of privacy. So choose wisely what you wanna share and what you don’t want them to know.  There are apps that can encrypt the data you save on Google Drive. Maybe the search feature won’t work as intended, but that is a petty loss if privacy is your foremost concern.

Cloud computing spectrum is already too populated to choose from. However here are five most popular (or with unique features) compared to Google Drive, which might help you compare the product to the competitors and get a clear picture in nutshell.

Google Drive: Will Enterprises Love It?

To answer in a single word, YES. Google Docs has been a tool for pros when it came to collaboration. Box, Zoho and gazillion other apps did help out, but the complete set of tools and popularity as well are still something that makes Google noteworthy. Now Google Docs powered with a cheap and reliable (in terms of robustness) Drive makes the task at hand more doable. True there were failed attempts like Google Wave, but only time can answer if Drive fails or not as an enterprise tool. Nonetheless, the tool along with other feature full complementary services definitely has the artillery to prove as a powerful opponent to those already popular.

The new product is no doubt a worthy one to compete in the market but has far to go to oust the competition. However there is a high chance people might stay out due to the strong privacy concerns the product poses whereas a few more features and the app can be an all wonder for the already existing Google userbase. The pricing options if taken into consideration is affordable compared to others. Apart from Dropbox, Drive can now see a worthy opponent in Skydrive which out of nowhere seems to wake up from the long slumber and taking things seriously. We will have to wait to see who stays and who just fades away. As of now, I’m definitely going to try out the new product albeit I’m not planning to abandon Dropbox or Skydrive soon. What about you? Oh I forgot, are you still in? Since it seems Google likes people to wait, as they say “Your Google Drive is not ready yet”. I wonder how long.

How to Automatically Convert files in Google Drive?