Lytro Camera Wants To Change the Way You Take Pictures

You remember those awkward moments when you clicked a snap and found that the subject is out of focus.

Maybe you wanted to focus a person’s face but your digital camera has an autofocus feature which automatically selected a random point on it’s focal length and focused the wrong person or object. The result is that auto focused pictures that are taken from your digital camera can’t be undone. You can’t change the focus point of any photo once it’s taken. Not to forget the fact that the moment when the picture was saved on your camera, is not going to come back either. It’s lost in time!

Well, the Lytro camera changes all that.

Before we move on to the details of the device, here is a sample image taken using the Lytro Camera. Click on any point on the image and you can adjust the point of focus, which is amazing

Note: The above image is not a PNG or a JPEG image but it’s Lytro’s own format which is served from their website. If you print the image or use a screen capture utility to save this image on your computer, the autofocus feature will not work.

The above image has two cute cats and a person’s palm, playing with the cat on the foreground. The person’s palm is in focus here which is illustrated by the fact that the cat in the background appears slightly blurred. The cat in the foreground also appears slightly blurred but since it’s very close to the focal point, the colors and other picture aspects appears fine.

Click on the face of the cat that’s in the background and the image will autofocus on the second cat. This is an amazing technology which lets anyone capture photos without having to worry on focus, distance, light and other natural factors. Using a Lytro camera, you can click a picture and adjust the focus point later. 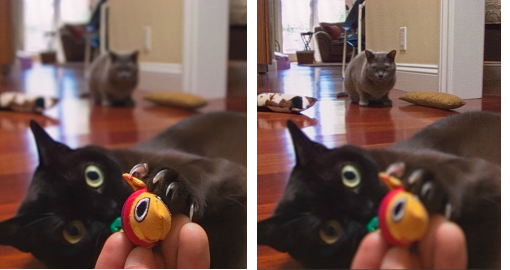 It’s kind of bridging the gap between amateur and professional photography, no need to buy expensive cameras, accessories and equipment’s. At least, the company’s aim is to provide a simple way to auto focus photos after it is taken. Sweet !

The Technology Used In Lytro Cameras

Lytro is developing a completely different camera which will forever change how people take pictures with inexperienced hands. In spite of capturing just one plane of light, the device captures the entire light field revolving around the picture. All the light fields that are flowing towards the camera are captured, recorded and saved by a single device. The Lytro camera saves a lot more information and data, when compared to other digital cameras available on market.

The result is that the output is a digital photo which can be adjusted according to your needs. The color levels can be changed, the focal points can be moved anywhere on the image so you can always have the perfect snap, without having to worry how it was taken.

TechCrunch recently conducted an Interview with Lytro founder Ran Ng, where Ran says that the company’s present focus is to produce a cost-effective device for the consumer market. Check out Lytro’s FAQ page and some example photos.