If you like to play racing games on your Android mobile, you can head to the Google Play Store and search for a game that fulfills your demands. However, if you want to play a car shooting or combat racing game on your Android mobile, you should check out this article. Here are some of the best free and paid car shooting games for Android that will let you pass your time efficiently.

Death Race is one of the best combat racing games for Android mobile that comes with tons of features. Like any other standard car shooting game, you can choose a co-pilot or partner. One of you will drive the car, and the other person will have to smash enemy cars with various weapons. Graphics, functionalities, options, etc. are given in more than enough amount so that you never feel bored. It offers some free cars, but you need to spend some money to upgrade or customize them according to your wish. Death Race is compatible with Android 2.3 or later version, and you can download it for free. Download

If you want zombie, racing, and car shooting in one game, you should play this one. Zombie Derby 2 is one awesome Android game with countless of blood-thirsty zombies of different types. After installation, you can find eight different cars in this game, and you can upgrade them one by one. Although the graphics look old-school, you may not find any problem using it even on the latest Android mobile. The controls are straightforward to comprehend so that you do not need to spend a lot of time to get started with this game. Regarding availability, you need Android 4.1 or later version. Download

If you want to permit your kids to play some games, you can install Earn to Die 2 which is another zombie car shooting game for Android. Although this is a zombie game, your kids won’t be scared as the graphics are pretty cool, neat, and clean. Car controls are easy to handle, and that is why everyone can play this game without any issue. It offers only one car, but you can upgrade or customize it easily. This game has one rule – you need to kill zombies while driving a car. Earn to Die 2 is available for free for Android 2.3.3 and later version. However, you need to make some in-app purchases to unlock all options. Download

If you want to build your track manually, Clash for Speed will help you do that. It is one of the best combat racing games for Android that is compatible with Android 4.1 or later version. Other games allow you only to customize the car whereas you can change the whole location, tracks, etc. if you install this game. You can build objects on the track, check the leaderboard, customize cars in the garage, etc. The graphics of this game are more than excellent so that you cannot get any glitch or anything while destroying your enemy. You can download this game for free, but you need to spend some money to unlock all cars, tracks, options, etc. Download 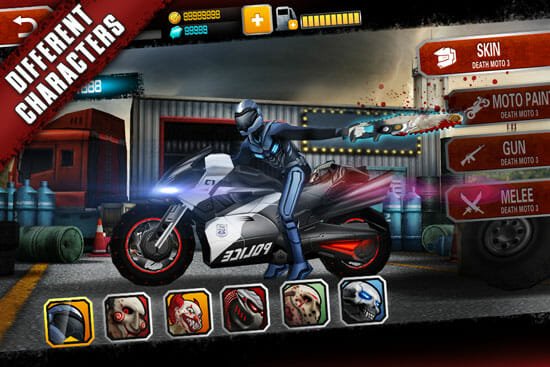 If you want to play “Road Rash” again on your smartphone, you should install Death Moto 3 which is probably the closest alternative to that old computer game. In other words, you need to kill your enemy or competitor while racing against him on a motorcycle. It is possible to customize your character from top to bottom. That said, you can choose motorcycle color, suit color, helmet, weapon and so on. This is meaningless to mention that you can upgrade all the components by winning races. Another positive point of this game is graphics, and that won’t disappoint you for sure. If you are ready to download, make sure your mobile is running on Android 4.0.3 or later version. Download

If you like to compete against multiple opponents, this game is for you. As a player, you need to destroy other enemies to grab the points or prize. It has a dedicated battlefield where people can join from different parts of the world and play against each other. You may not get awesome cars right after opening this game, but some customization can make them better. This game has some 4×4 monster cars as well as sports vehicles, and every car can be upgraded with different components to improve the performance. It offers three different game modes, i.e., Deathmatch, Team Deathmatch, and Capture the point. You can install this game for free on Android mobiles running Android 4.4 or later version. Download

If you like the “Mad Max” series of movies, you might like this game as well since some cars look quite similar to those movie cars. This is a typical combat racing or car shooting game that has all the essential functionalities. From choosing a car to track – you can do every possible change before starting a race. You cannot finish this game overnight since it has more than 90 levels, 15 different types of enemies, ten death cars, and four types of upgrades. Also, you might have to spend some money to unlock all the features, cars, etc. Before downloading, ensure that you have Android 4.1 or later version. Download

Finding a typical racing game for Android is very easy, but it is quite difficult to find good car shooting games for Android. However, this list will help you for sure.