How to Fake GPS Location on Android

Android is popular because of many reasons and the availability of wide range of free apps is one of them that helps any kind of user to get more out of the mobile. Android mobiles are comparatively cheaper than iOS but still it is pretty good it terms of apps, features and all.

However, sometime, we need to install an app or browse some sites those are actually unavailable in our country. For instance, suppose you want to open Spotify or install Pokemon GO on your mobile. If you get the examples, you might have found that those two things are not available in all the countries across the globe. Obviously, VPN is a great option that you can opt for in order to bypass regional limitations. However, you can also fake GPS location on Android to install country specific apps or browse blocked websites from anywhere in the world.

The advantage of using fake GPS location app over VPN is you won’t get any bandwidth limitation, which is a major factor in VPN or Virtual Private Network. Many people cannot browse the internet because of having low bandwidth in VPN. However, like said before, if you can fake GPS location on Android, you can bypass that problem as well.

Obviously, this is not possible without using any third party app. Therefore, head over to this free app called Fake GPS Location Spoofer for Android. This is a tiny and simple but very reliable app available for Android 2.3 and later version and the best part is you do not have to root your device to fake GPS location on Android using this app.

Like mentioned above, you will not have to worry about the bandwidth limitation and you can select any location you wish. In fact, this is possible to enter specific address to browse from. Very simple options such as Start/Stop will let you do that it defines.

At first, download and install Fake GPS Location Spoofer on your Android mobile. If you just want to change your location, the free version is more than enough. However, if you want to do more, you can opt for the PRO version that costs around $2.99. after opening it on your Android mobile, you will be greeted with the following screen, 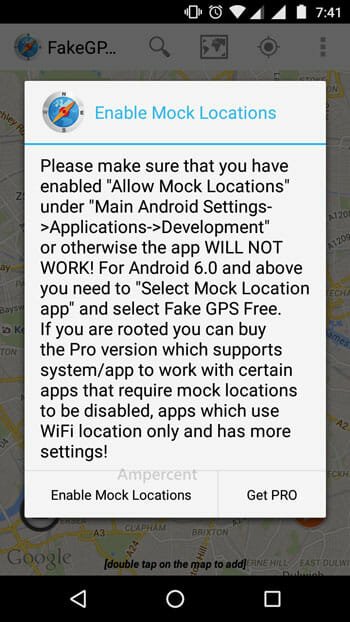 You have to change the Mock Location app on your mobile. For that, go to Settings >> Developer Options. Here, you will find another option called Select mock location app. Tap on that and select FakeGPS Free as your default Mock Location app. 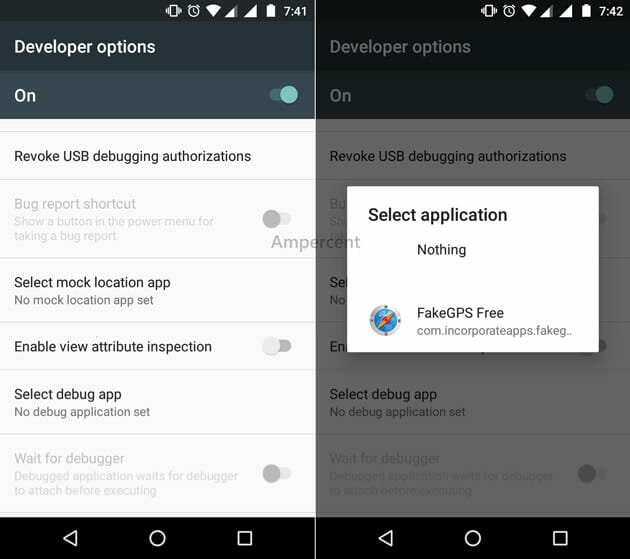 Now, return to the actual app and enter an address. You can use the search button to enter a specific address. After selecting one, hit the Play button. You should get a text like Fake location engaged on your screen.

that means, your GPS location has been changed. Now, you can open Map and find yourself somewhere else except your actual location.

There are some other apps those work pretty much in the same way. If you do not the aforementioned app, you can try these following tools.

Fake GPS is a simple yet very feature-rich application that allows you to set a fake location for yourself. No matter whether you are in the office or at home, you can fool others by sending a fake location with the help of this tiny app. Fake GPS app requires android 4.0 or later version to install. You can literally set any place as your default location. To install and set everything up, you need to follow this tutorial. 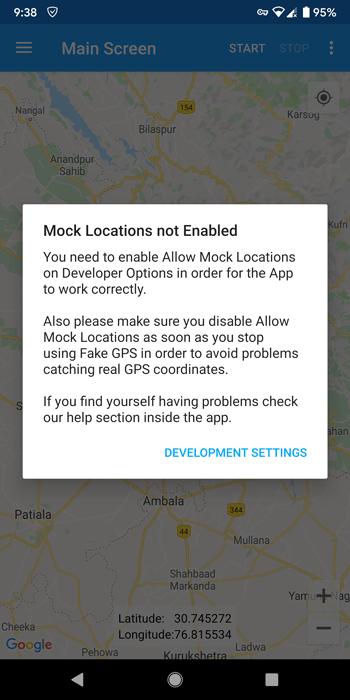 After that, go back to the Fake GPS app and tap the Start button. Now you can open your Google Maps app and check your location. It should show the fake location.

Fake GPS is another application that allows users to use a fake location as their default location. It requires android 4.1 or later version to be downloaded. Like other mentioned apps, you need to select it as the default mock location app. Otherwise, it won’t work as desired. It looks quite old-school but it does the job pretty well.

How To Enable Developer Options In Android?

If you want to select a mock location app, you need to enable Developer options first. Android doesn’t keep it on as wrong settings can harm your user experience and break your phone from software level. Therefore, you need to go through some steps to turn it on.

To get started, go to Settings, and About phone. Your phone may name it something else. You need to find out the Build Number and tap on it seven times.

After that, you should be greeted with a message saying ‘You are now a developer.’ Once you find it, you can choose mock location app from the corresponding menu.