How to Play YouTube video in Background on iOS, iPhone or iPad

YouTube is the biggest video broadcasting website and the second largest search engine in the world. These two things demonstrate everything. In other words, millions of people have been using YouTube to share their daily videos with the world. There is actually no reason to hate this video broadcasting site, which is powered by Google, the web giant. On the other hand, iOS is yet another awesome mobile platform, which is being used by millions of people from across the globe.

If you are using iOS, you know how good it is and what does it do in order to help a user. No matter, whether you are a student or businessman or anything else, but you can certainly be familiar with your iOS device within minutes as thousands of apps are available for iOS on App Store. Apart from that, iOS comes with an awesome set of in-built apps those can certainly help you to ditch other platforms.

Now, let’s assume the following scenario. Suppose, you need to listen to various songs while doing some other tasks. There are many people, who often listen to soft instrumental music while writing or doing any other task. If you are one of them and often listen to music, while doing some other things, here is another scenario for you. Suppose, you want to open YouTube on your iOS device and want to do your job on the same device.

Therefore, whenever, you will switch from YouTube to any other app, your video will be stopped immediately. So, you cannot listen to your favorite music and do your task simultaneously. Now, if you want to play YouTube video in the background on iOS device aka iPhone or iPad, here is a solution.

Although, this is not possible to watch the video and do your task in any other app, but this is certainly possible to play the audio of any YouTube video. To do so, you do not have to install any other third party app as the built-in feature of iOS can help you to play YouTube video in background on iOS device.

Read More: How to Search for YouTube Video While Watching Another

At first, open Safari browser, which is another built-in app in iOS. Then, go to YouTube and play any YouTube video.

After that, press the Home button and open any other app if you want. Now, open Control Center by swiping from bottom to top. Here, you can find a play button to play the YouTube video. 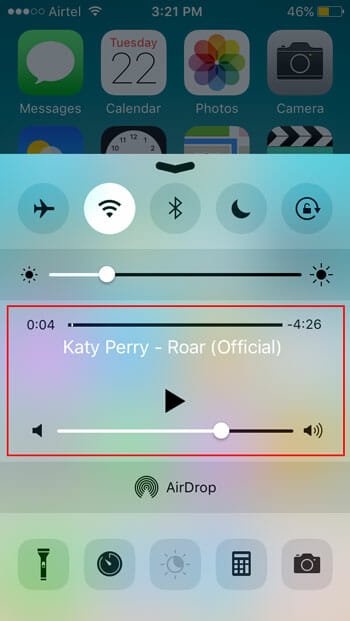 Just tap on that. Now, you can listen to your audio. If you open the Safari browser again, you can resume the video.

That’s it! Hope it would be helpful for you.