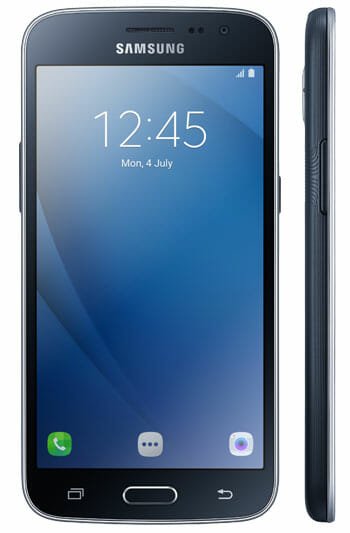 As said before, this is going to be a pretty good mobile with some cool features at such a nice price range. Samsung has not changed anything major in terms of look of this mobile. This comes with the traditional Samsung mobile look. That means, you will get a home button along with two touch sensitive buttons on the front side. The back panel contains camera, flash etc. The most important update it LED notification, which will glow for notifications. The dimension of this mobile is 142.4 x 71.1 x 8 mm, which implies you should not get any problem while handling this mobile using one hand.

You will get a 5-inch Super AMOLED display that is probably the best thing of Samsung mobiles. This is needless to mention that it has 16M color depth, 720 x 1280 pixel of screen resolution, 294PPI pixel density and multitouch support. This Android Marshmallow running dual SIM mobile with be having Spreadtrum SC8830 chipset along with Quad-core 1.5 GHz Cortex-A7 processor to power up. Obviously, you will get a good performance as this is Samsung mobile. However, if you have used high end mobiles, you may not get as good performance as they have provided earlier. For the graphics, Mali-400MP2 is included in this mobile. This mobile seems to be good for daily use and may not be as good for gaming or high end apps.

Talking about the RAM, you will get 1.5GB RAM in this mobile along with 8GB internal storage. Obviously, the RAM is very low as compared with other same range mobiles. However, you can extend the storage using SD card. It does support up to 128GB.

The Samsung camera is always a plus point. This time, Samsung Galaxy J2 (2016) will come with 8MP rear camera with single LED flash, autofocus and more other regular features. Apart from that, you will get 5MP front facing camera. The rear camera can record video in 720p at 30FPS.

The battery of this mobile is pretty good and up to the mark as it sports Li-Ion 2600 mAh battery, which is removable. This is the best part as sometime we want to replace the battery but cannot do so due to being non-removable.

This mobile is priced at Rs. 9750, which is almost same as Redmi Note 3. Stay tuned to get a comparison.