According to a source, there are more than 6500 spoken languages in the world. However, this is quite difficult to learn a different language than your mother tongue. For example, your native language is English, but you want to learn Portuguese. Although Portuguese is a sweet language you will face thousands of problems while trying to learn that language. However, it would be better if you can get a guide, who will teach you in every step. For example, you want to communicate with someone who speaks a different language. You need someone who can help you in that situation because translation should be fast and reliable while communicating with someone. Duolingo is a fast and very trustworthy app available for Android and iOS. However, if you want to use a Duolingo alternative on your mobile, here are some of them those are tested and came out very useful.

Duolingo Alternatives for Android and iOS

Some of them may come with quite similar features as Duolingo has. But you can certainly find something different in these apps. 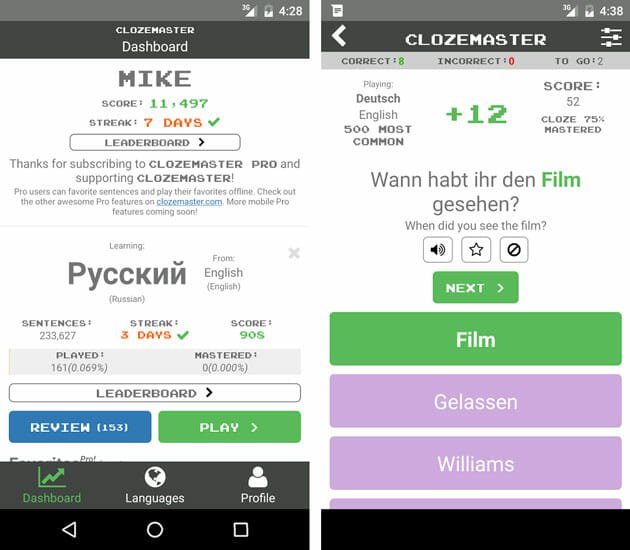 If you even feel boring with Duolingo, Clozemaster will help you in that situation as well. Clozemaster has a beautiful user interface that features several functions to help you to learn a different language. You can learn almost 100 different languages which are more than Duolingo. According to the developer, learning a language is a game, and the same mindset can be found in the app as well. You can find virtual gaming like a puzzle in the app that will assist you in learn a particular language faster. Even though it doesn’t require any sign-up but if you want to save your progress, you must have to create a free account in this app. Unfortunately, Clozemaster is available for Android 4.1 and later version. There is no iOS version available for this app. Download

Babbel is available for iOS as well as Android that comes with several useful functions for your mobile. The chat style user interface will let you learn a language pretty faster. However, unfortunately, you can find only 14 languages available in the app. The Babbel trainer will not only help you to learn a language but also it can aid you to speak that language. All your sayings will be saved using voice recognition in your mobile, and it can be synchronized across multiple devices. Although you can download it for free you have to spend around $19.99 to learn other languages. On the other hand, you must have either iOS 8.0 or later version and Android 4.1 or later version to install this app. Talking about the languages, you can find Spanish, French, German, Brazilian, Russian and much more in this app. Download: Android, iOS

Being available for Android 4.1 or later version and iOS 9.0 or later version, it comes with plenty of useful features. This is a fixed up of Clozemaster and Babbel. Like Clozemaster, you can find more than 100 languages in this app to learn them alone. On the other hand, it comes with a game style user interface that will let you learn a different language faster. The best part of this app is you can speak to native speakers of a particular language so that you can practice your training quickly. As this app is available for Android and iOS, you can synchronize your practice across all the devices. That is undoubtedly must better than Duolingo which doesn’t allow users to speak to locals or practice your knowledge. Memrise is available for free, but you need to purchase few things for at least $8.99 to unlock all the functions. Download: Android, iOS

There are more other training courses and app for Android and iOS, but these Duolingo alternatives can certainly blow them off. What do you think about these apps?