Turn Your Smartphone into a Remote control for 800,000+ devices with AnyMote

How many remote control you are condoning with, right now? If I go with an average value, it’s somewhere between 4 to 6. Now, locating the right remote control for the right device at the right time can be anything but a reality. According to The Telegraph, we, the regular Television viewers, normally used to astray close to two weeks during our lifetime on searching lost remote control devices in our home.

Let’s admit, it’s a chaos. Thankfully, AnyMote Home can bring in the necessary order in this chaos. It can turn your smartphone into a remote control for the largest range of supported devices, a staggering 800,000+. It can control and instruct almost all the devices which obey infrared commands like, TV, DVD or BluRay player, Set top box and the other domestic electronic utilities. 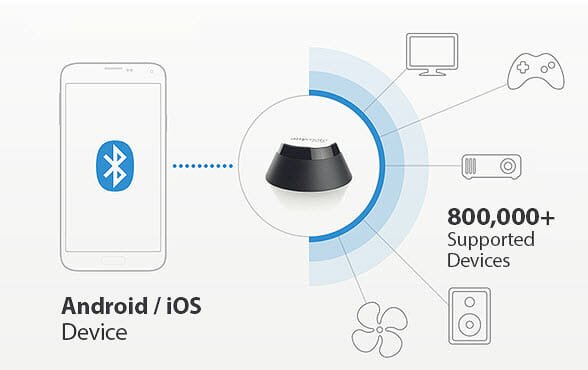 Simply, wave your hands over your smartphone or tablet to go to the next TV channel or raise the volume level. It’s called the ‘Air gesture’, a next gen feature(only for Galaxy S4 running on Android 4.1 to 4.4) for your first true universal remote. Moreover, it’s all configurable. Do just that, you want from it to do for you.

Ok. Let’s get to the point. For the complete set up you will be needing two things. Firstly, the AnyMote device and secondly, the Smart IR Remote app for your smartphone or tablet. Now, put the device on a place from where it can directly see all the devices in your room to be controlled. Any good reflecting surface will also perform the same. Next, download and install the Smart IR Remote app on your Android/iOS phone(iPad & iPhone variant is going to be launched, recently.) or tablet.

Launch the application and let it sense the Anymote device first. Now, on your phone, firstly, choose a category and key in the model you are now using. Consequently, a testing process will be initiated and at the end you will be presented with a array of the best matching remote control. Simply, choose anyone from the list and your remote control is ready to command. Further, to add another device, repeat these same steps. 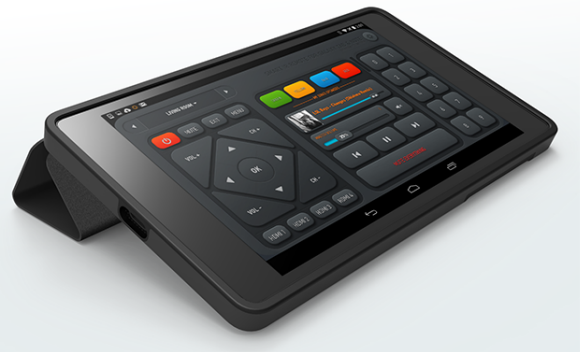 I have already told that, it covers a staggering 800,000+ devices mothered by any branded companies. So, there is pretty less chance that your device is not covered. Still, you are that much unfortunate, dont worry. You can record your custom commands, you require and add them to AnyMote’s colossal database. Just, help the team to get your device covered and by doing so, definitely, you are helping that person who uses the same device.

With Smart IR Remote, it’s possible to control more than one device, simultaneously, from a single remote. Yes. You can integrate your most used remote controls to design a single and unique smart remote dedicated to your wish and AnyMote Home works together with this already popular application. Eventually, this app also integrates SONOS system through a standard WiFi connection.

It means, you can expect an array of smart moves, automatically, from this brilliant set up. It knows to mute/pause your TV when there is an incoming call and also make it to start playing again when you touch the ‘call end’ button. Moreover, every single time, it greets you by turning on the AC and your favourite music with an assistive lighting pattern, when you come home.

Despite having 4 high powered IR LEDs for a complete 360° view with a 33 feet radius, it drinks relatively less juice. A standard test shows that it can work for an entire year with an execution rate of an average 2700 commands daily, on two AA Duracell batteries. Added to this, a brilliant addition of services like IFTTT and features like, movie mode, TV zapper, it has all the muscle to be the unrivaled service in its niche.