The situation becomes more daunting when you are traveling on a busy train or bus and your phone is in the trousers pocket. Of course, you can turn on the shuffle mode but how do you change tracks or interact with the music player app, without unlocking Android’s lock screen.

In this tutorial, we will take a look at some alternatives which can be used to control the music app from Android’s hard buttons or from the lock screen itself:

Tactile Player is my favorite tool which gets the job done and I must say, this one is a must for any music addict who wants to change songs using Android’s hard buttons or play/pause the current playing song. When you are listening to music and don’t want to unlock Android’s lock screen, simply enter the following commands

It works and the best part is that there are no settings and absolutely no configuration required on your music player app. The only catch is that the Tactile player app must run in the background or else the default music player app won’t be able to receive your commands via the volume and power buttons.

One downside of tactile player is that there is no way to slide a song or fast forward it without unlocking the screen. You can either jump to a previous track or switch to the next track in the current playlist.

Simply lock screen is a wonderful lock screen replacement app for Android which comes packed with basic multimedia features. You can show clock, date, time and media buttons on the lock screen itself, thereby allowing you to control the order of songs that is being played by Android’s default media player app: 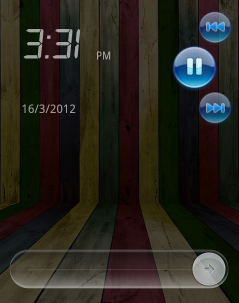 Simply lock screen adds three buttons on it’s lock screen, so you can play a previous or next track or pause the current one by tapping the respective buttons on the lock screen itself. This one is a good choice if you are looking for a better lock screen replacement with added features.

The default media app on Android is pretty Spartan so if you are a power user, consider switching to Winamp or PowerAmp media player. Both these apps are available as a free download on Google Play store (Android market) and they allow you to control the current playlist without having to unlock Android screen over and over again. But I would prefer using Winamp because its interface is more clear and the app is completely free, while Poweramp allows you to use the trial version only for the first 30 days. 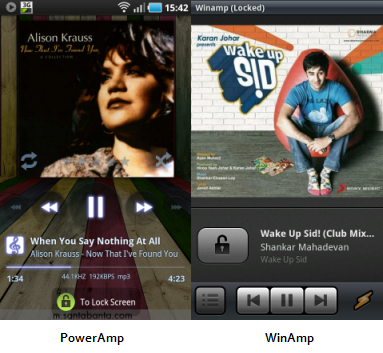 Poweramp has a slight edge over Winamp as you can use the “Now playing” slider from the lock screen itself. There are dedicated buttons for playing, pausing, previous, next track but there is no shuffle button to randomly shuffle the order of songs.

Which method would you use to control your music app without having to unlock the Android lock screen? Share your ideas in the comments below.