The Chinese computer technology giant, Lenovo, started this year with announcing three devices in the first month itself. The Vibe X3 (though it’s got announced in December, it would be hitting markets this month), K4 Note in India and K5 Note in China (as of now. ) Both Note devices this year from Lenovo, though share a common series name which would make us interpret as if one device is successor to the other, there are lot of differences in specs of the two which would prove us wrong. Even though we do not have any information regarding release of K5 Note in India yet, but if it happens, it would really be weird seeing two devices in same line appearing in same year. Anyway, let’s take a look at spec sheets of these two guys and find out what they have to impress us with. 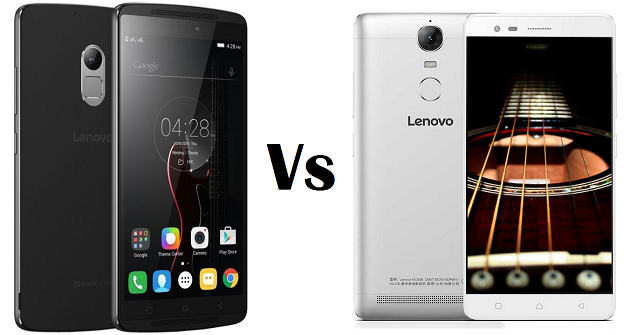 Both devices, K4 Note and K5 Note share many common aspects in the design section. Both have metallic body with curved edges, giving you premium look. Both devices have fingerprint scanners using which you can unlock your device just like that with touch. Display side too, both devices come with 5.5 inch FHD (1920 x 1080 resolution) IPS display – which would enhance your visual quality with appropriate brightness, vivid color production and great viewing angles. You can watch HD video content on this legitimately large screen without any issues. Looking at dimensions, K4 Note measures 153.6 x 76.5 x 9.15~3.8 mm while K5 Note measures 152 × 75.7× 8.49 mm. Coming to weight, K4 Note weighs 158 grams in hand, although we don’t have K5 Note weight information yet. But if you see, K4 Note is lot thicker compared to K5 Note so if you are fan of thin devices, which is one of the major trend in gadget world, then you may like K5 Note. We can also expect this device to be lighter than Note 4.

Inside, Lenovo K4 Note features 1.3 GHz Octa-core MediaTek MT6753 SoC paired with up to 450MHz Mali T720-MP3 GPU while K5 Note has 1.8 GHz Octa-core MediaTek Helip P10 SoC coupled with up to 550MHz Mali T860 GPU. Both devices would perform great handling high end processing well, but if you want to compare them, vote goes to K5 Note because of it’s highest clock speed. Strictly speaking, for an average user, it would’t be that frequent to observe the difference in performance. So, there isn’t much to worry about here. Storage wise, surprisingly though, K4 Note looks like a winner with whooping 3 GB RAM and 16 GB flash storage as opposed to K5 Note which only has 2GB RAM and 16 GB flash storage. Both having 16 GB storage is a downside for many people, but the company choose to make that sacrifice to fit them into the destined price bracket. On the bright side though, both devices do come with Mirco SD card slot using which you can expand your memory up to 128 GB, which is a relief. On the software side, both devices run Vibe UI, a customized skin from Lenovo on top of Android Lollipop. Like many smartphones makers are doing, we can expect Marshmallow update soon on both these devices. But I honestly feel devices coming out of the box with Lollipop should die.

On paper, both devices, Lenovo K4 Note and K5 Note have same camera on the back side – 13 MP Phase Detect Auto Focus shooter on the back with f/2.2 aperture and dual tone LED flash. On the front side, K4 Note has 5MP shooter while K5 Note features an 8MP 77.4 degree wide angle lens. Primary cameras on both would give you nice shots with appropriate color saturation on brightness on day light, LED flash would come for rescue on low light conditions. Coming to front side, if you are a type of person who feels taking selfies is part of the life, you may consider K5 Note because it has better camera than the former.

Battery, Connectivity and Others

Lenovo K4 Note has 3400mAh battery where as K5 Note comes with 3500mAh battery. Since the difference is not much, you can expect both devices to give some good amount of battery backup. Coming to connectivity also, Both devices are 4G enabled dual SIM devices supporting Wi-Fi 802.11 b/g/n/ac bands, Bluetooth 4.0 and GPS. Both devices have high quality speakers with Dolby ATMOS technology which would give you great listening experience.

The main thing about these two brothers is the price tag they are coming out with. K4 Note is available at ₹11.9k where as K5 Note is there for ₹11.3k. This slight margin wouldn’t be an issue for people. Yet, deciding which one should be your pick seems a little tricky. K5 Note has higher clock speed CPU but K4 Note has more RAM. K5 Note also has better selfie camera and batter battery where as K5 Note is more thick. K5 Note comes in Silver and Golden colors where as K4 Note is available in black. Both devices have similarities in many aspects as well. So, while picking your device, consider all these points. But which ever you choose, you won’t get disappointed as on the surface, both devices are great budget friendly devices with great display, chipset and camera. What more an average customer could ask for?