As they say, the “perfect” smart phone doesn’t exists. You may get a phone with one or two impressive features, but with some sacrifices as well. But eventually “that” feature a smart phone got will make that to stand out in the Smart Phone market. Some variants come with a larger camera, some come with larger battery. Depending on your need, you’ve got to pick one. Again, sacrifice is something that’s never been changing. But the Good news about today’s Smart Phone market is that as the demand for technology getting increased, eventually the price of hardware tend to fall down. So, companies have to fit in their mobile in the desired price with added impressive features and adjustable sacrifice.

Keeping this market analysis apart, the demand for multi media is increasing rapidly all over the planet and new trends are emerging among people. One of which is taking selfies and sharing them across all social networks. People used to ask some other person to take a snap in previous days, but that’s not the case anymore. As Mahatma Gandhi said, “Self Help is the best help”. That holds true while taking photos too. Taking selfies is a big trend now that everybody follow. Smart Phone makes did realize this and added a camera on the front, and the quality of front sensor is getting improved day by day along with the primary shooter. Some Phones did come out with impressive front cam with wide angle lens and improved optics. Some mobiles even contain flash on the front now and able to take HD videos up to 720p.

But truth to be told, we didn’t see peak in this trend. Here we go, the Chinese Meitu, (probably you wouldn’t heard about that until now) released a device recently with 21MP primary sensor – Surprised? Yeah, well me too. Even though pixel number doesn’t alone determine the quality of a camera, but this is an evidence that how people are crazy about taking photos. Digging into it’s specs, this phone got a 21MP auto focus front sensor having LED flash. Having 6 lenses inside with f/2.2 aperture and viewing of 78.2 degrees, this looks like a beast on paper.

Well, that’s an expected question. According to our source, this phone has got auto-focus21MP front shooter with f/2.2 aperture with LED flash having 6 lenses. Even though we didn’t get a clear hands on on this device, you can expect great camera performance from this device- Being able to take both videos and photos.

From the source, here is what we get:

Apparently the company also unveiled an updated version of its flagship- V4S – featuring 4.7 screen with 720p display, having MediaTekMT6752 chip coupled with 3GB RAM and 64 GB storage. It has 13MP sensors on front and back and a 2160mAh battery. But the downside of this device is that it runs Android 4.4 with MeiOS2 on top. This model would be priced at approx $376. 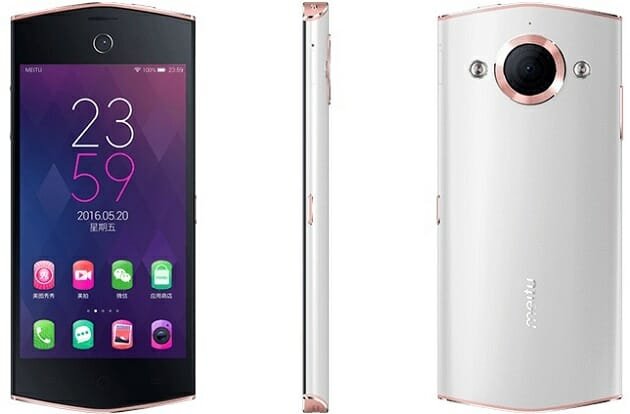 Final Word
Both devices are having great specs on paper. Even though we have limited information about them now, both are great worth checking.

What do you think of these two? Do let us know in comments.