Pinterest is the word of the day. No matter what you like, and whatever of it is available on the web can be “Pin”-ned. That is how the name was put to use, Pin your Interests. The fact that Pinterest generates more referral traffic than Twitter now is quite captivating publishers to adopt this mode of promoting their content. Considering the success, It’s a no-brainer that this model will soon be adopted by developers to create mashups. Developers are now banking on the overwhelming success of the new breed of social engagement and creating services employing the Pinterest socializing model. Here are 10 picks from recent times that is somehow linked to Pinterest either by the looks or by the way it works. Keep reading to find which one tops the list. 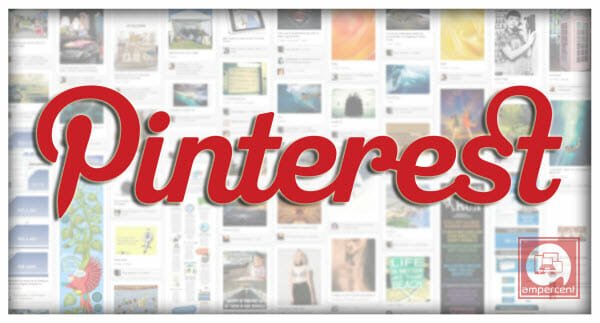 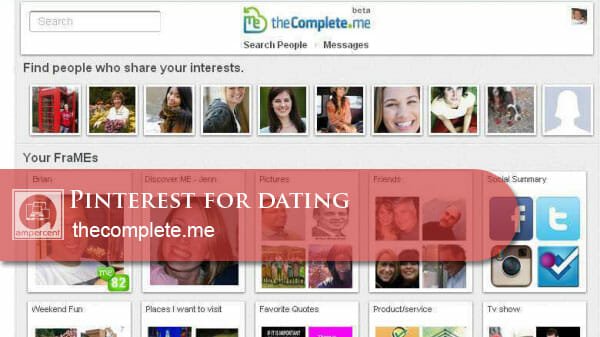 The Facebook app from former Match executives is a way to put your interests in a FraME similar to Pinterest boards. The idea is to analyze items you share on Facebook, LinkedIn, Twitter, Google+, Photobucket, Flickr, Foursquare,  GoodReads, and Instragram and thereby express your true self. Built from the idea of making dating a social experience the job is to put together the real YOU by how and what you are sharing. The more you share the more your ME score gets increased. The people are open to communicate with anyone without befriending or subscribing to anyone. The open communication is realistic as it is quite unlikely that we will be friends with anybody we ever talked. However, we gradually get to know a person as we keep talking and then we can decide whether or not to share a friendship or LIFE with that person. 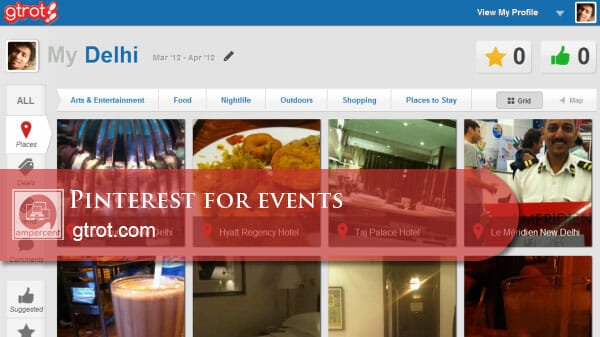 This service is another travel assistant or more specifically a tool to track events and find places of interest for a city. The data is curated based on your friend network on Facebook, Twitter and Foursquare. The site’s grid based design is similar to that of Pinterest. Working model is quite different from that of Pinterest. 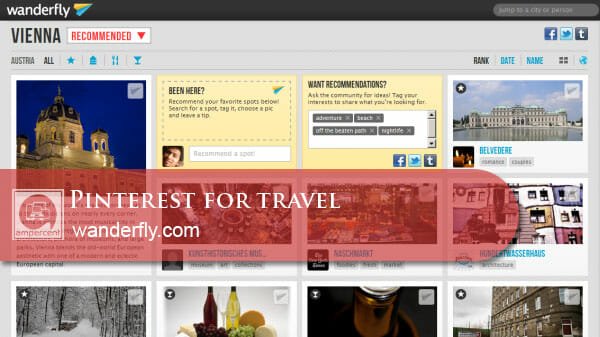 A travel site that focuses on advising travelers with places to visit based on their choice of places, budget, span of travel etc. The site lately relaunched with a new layout. Take a look and it is hard to miss its similarity to the Pinterest design. The pages for places also looks very similar to the Pinterest board. The places are tagged as it is in Pinterest. The new layout of Wanderfly is quite pleasing and no wonder Pinterest earns some credit for that. All said, Wanderfly functions quite differently and is not a mashup of Pinterest in this matter. It does what it supposed to do in a brilliant way. 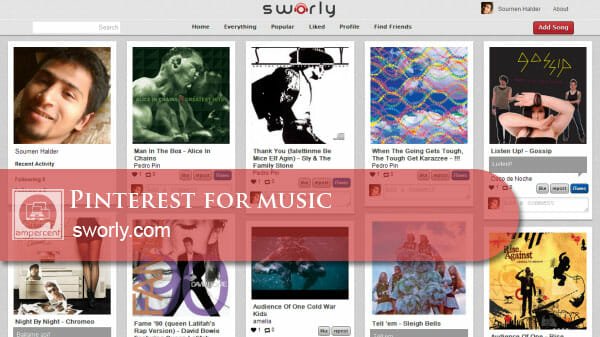 Pinterest experience can be pleasing for audiophiles too. Want proof? Try Sworly. Pinterest style sharing and browsing adds a new chill to your music tastes. You can like songs and the tool also lets you create playlists which too is seemingly inspired from Pinterest boards. You can like songs, repost them, put comments and also buy them from iTunes. 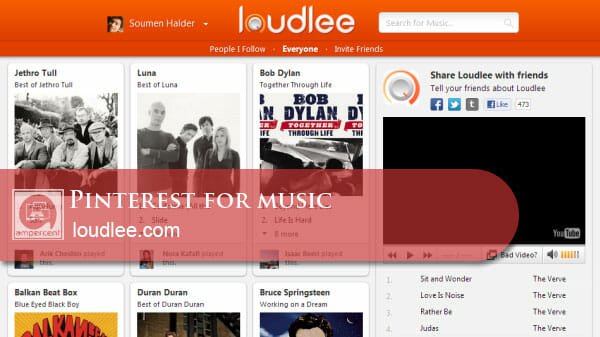 It will be unfair not to mention Loudlee, a similar music jukebox, that also mimics Pinterest. This is actually similar to Sworly other than the fact the video streaming on the site performed better than the previous one. Design wise both are equally closer to Pinterest. The thing I detest about those two services is that you actually watch music videos and not audio tracks. This sort of is a problem if you are too worried about data charges or using a slow connection. Nonetheless, both of them are great. 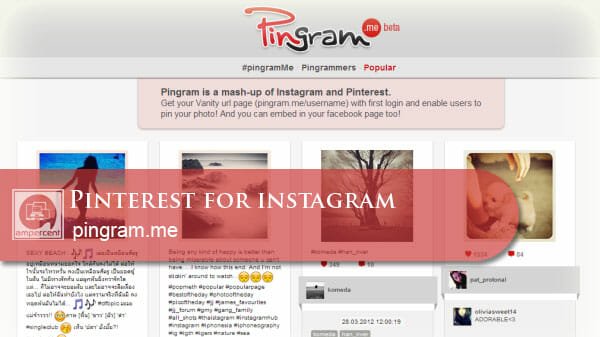 Instagram and Pinterest being the new breed of social network people are flocking in to share their tastes in pictures, Pingram seems to unite them both. Sharing your Instagram photos in a Pinterest style and also to share them on the latter network is likable. This also serves great since Pinterest is showing signs to be strict with copyright issues. Since Instagram is a great way to share something you own (read clicked) you do not need to be frightened of the copyright trap anymore. 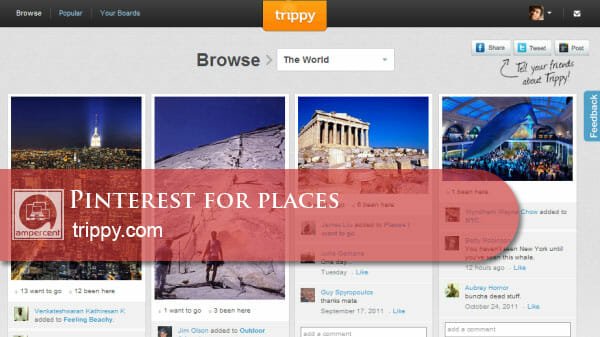 A travel site or a social bookmarking tool for wayfarers. The tool lets you pin images of places you have been to or want to be. The core concept is simple, curate your desire to roam and share your wanderlust. The service looks quite familiar with Pinterest and offers an interface that also functions akin to Pinterest while the Repin and Like buttons have been replaced with “Been” and “Want”. The boards also resembles that of Pinterest. 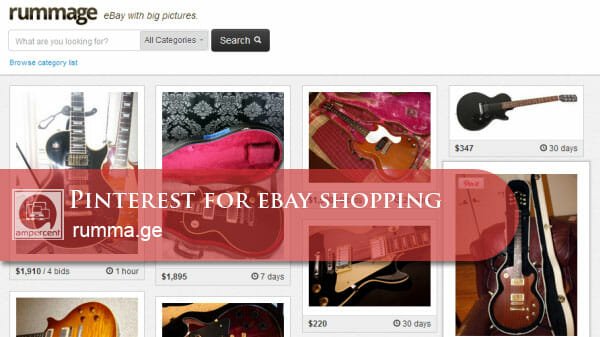 By far the best tool that has made use of the Pinterest model to offer a more pleasing shopping experience on eBay. The shopping service offers plethora of products over numerous categories and caters to a sizeable amount of web buyers. The new tool Rummage, simplifies the search for a product on eBay but also helps you get more insights on the product. I can vouch on the fact that while using Rummage you are more likely to find a product you are looking for. Simple and wieldy are the two words you can best describe it. 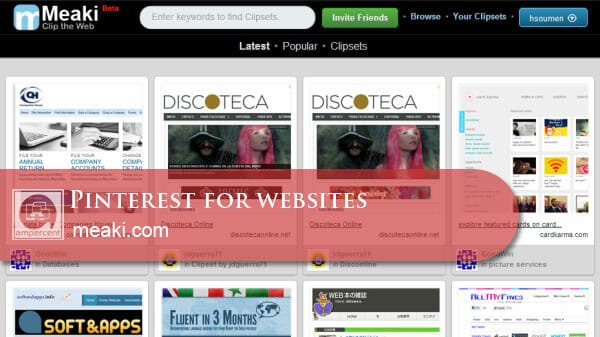 Pinterest mode of sharing was meant for pictures. Well if you choose to pin websites of you can try Meaki. Stubleupon, Digg, Delicious etc true there are bigger and better names for this trend. But what makes this simple startup unique is the simplest approach for sharing, finding and curating websites you love. You can CLIP websites much similar to PIN images on Pinterest. Also you have CLIPSETS which again imitates the BOARD on Pinterest. That’s that, simple clipping just like pinning. And take a look at the snap above and you’ll hardly find it different from Pinterest. Sadly second in the list as the top pick had the spot by that much. 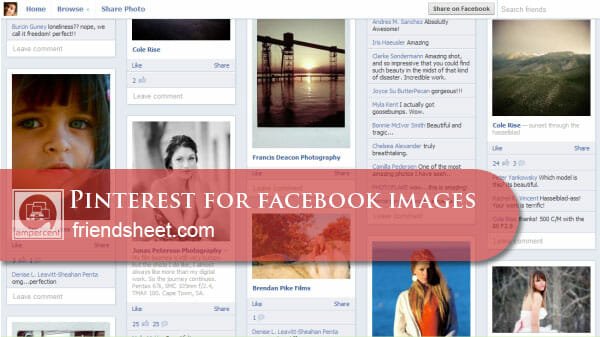 And so the winner is Friendsheet. This is by far the best Pinterest lookalike and work-alike tool in the list. Do you love photos? Do you use Facebook to browse great snaps shared on it? My answers to both these questions are YES. If you are like me, Friendsheet is for you too. The Facebook’s one-update wide layout seems to work good for text but it is quite a pain to keep scrolling if your feed is too crowded with images. However, the Pinterest (non-uniform grid) layout is quite well for image browsing. Zach Allia, put this simple idea to work and the new tool shows Facebook images in a Pinterest layout and also lets you like, share and comment on them without opening them. Although the image if opened gives a layout much like the new Facebook’s new theater mode image viewer only in a segmented way. One small fact, the tool went viral when Mark Zuckerberg liked it and it showed up on his subscribers/friends feed.

So here goes the best picks that has the potential to make a mark while following the Pinterest model. However, I’m sure there are plenty more that didn’t find a place here, maybe you can help. Tip us and if we find your entry deserves to be on the list we will include it with a credit. The search for startups like Pinterest isn’t over and it shouldn’t be and it wouldn’t be as long as Pinterest keeps getting the traction. That’s how we got better things to do what we love to do. Stay tuned for more apps as we discover and share them you. Until then share and engage socially in a wonderful web society with the apps that matter.