It has been more than a week since Microsoft released a consumer preview of the latest version of its Windows operating system, codenamed Windows 8. As of the time of writing this article, more than 1 Million people have downloaded the public beta of Windows 8, which kinds of proves how popular Windows continues to be.

But before you jump in, it would be better if you quickly check whether your computer’s current hardware configuration is sufficient enough to meet the minimum system requirements of Windows 8. Here is a complete list of all system requirements a desktop PC must have, in order to run Windows 8:

Example: I use a pretty old desktop computer with 1 GB RAM and a recent laptop equipped with 2 GB RAM. I have installed Windows 8 consumer preview on both systems and I can assure you that one must have at least 2GB  of RAM, if you want a smooth Windows 8 experience. 1 GB RAM, though theoretically sufficient, falls short in front of Windows 8 and there is a high chance that you won’t get pass the installation itself.

Screen resolution: Your system must have a screen resolution of at least 1024 X 768 for the Metro apps to work and a resolution of 1366X768 for the snap feature. Anything less and you might get stuck behind an error message. I would recommend notebook owners not to install Windows 8 consumer preview on small screen and wait until Microsoft releases a stable build in early 2013. Sure you can try but you are going to feel disappointed, big time.

Upgrade: If you’re planning to upgrade your existing Windows 7 installation to Windows 8 consumer preview, you’re in luck. Just run the default installer and it should take care of the upgrade process on its own. There is a way to pause the download so you won’t have to be present in front of the computer screen, while all the files are downloading.

If you’re upgrading from Windows XP or Windows Vista, please note that Windows won’t preserve any settings, installed applications or programs, once you have upgraded your old Windows configuration to Windows 8. Only the files will be backed up, not the apps.

New laptop? If you’re planning to buy a new laptop that ships Windows 8 out of the box, I would say drop the idea. This is because Windows 8 consumer preview is still not final, why buy and pay for something which is going to change within 1 year going forward?

Software and hardware compatibility issues: Finally, you want to make sure that all the peripherals, accessories and software applications are compatible with Windows 8. If you’re using Windows 7, chances are that most software programs and hardware peripherals will be compatible in Windows 8. However, it is good idea to visit the Microsoft compatibility centre and cross check each device or software program, prior to performing a complete system upgrade from Windows 7 to Windows 8. 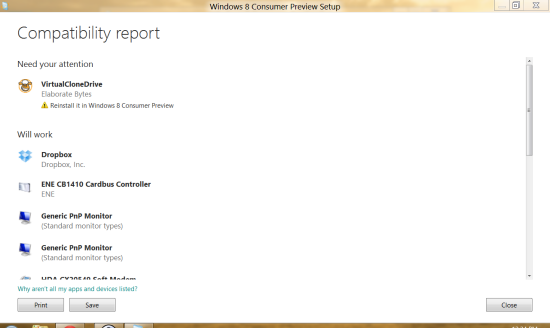 Alternatively, download this executable file and generate a hardware and software compatibility report of every device that is connected to your computer running Windows 8. Running this setup, you will have a fair idea which programs would run and which programs won’t run in Windows 8.

To get an idea of how Metro apps work in Windows 8, watch the following video where Tami Reller gives a demo of Windows 8 consumer preview (Microsoft keynote, CES 2012):