The Best Desktop Widgets and Gadgets for Windows

Do you like to display widgets on your desktop? They’re really great for keeping up with important data and information that only requires a quick glimpse now and then.

Unfortunately, Windows has decided to move away from desktop gadgets, so the sidebar is pretty much obsolete. Earlier this year, Microsoft even advised all users to totally disable the sidebar for security reasons.

If you go to the Windows gadget gallery, you’ll notice a message stating that they will no longer host gadgets on their website. However, you can still freely use widgets and gadgets from other sources on your desktop. Not only that, but there are a few customization toolkits available that you can use to further customize your desktop. Best of all, these toolkits include their own widget galleries making it easier to find any type of widgets that you need.

Today I’m going to share some of those toolkits along with a few widgets and gadgets that you can use on your Windows desktop.

CamDesk is a desktop webcam widget that you can download for Windows. In order to use it you’ll need at least a webcam, but a microphone is also recommended. CamDesk serves as a surveillance tool, but can also be used for demonstration purposes. There’s not much information on the website, but it looks like it can be used to spy on others, or to keep an eye on your computer while you’re away. 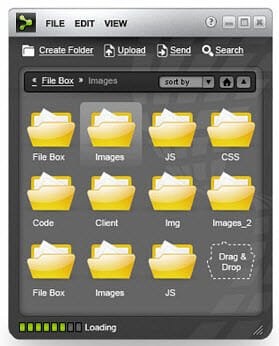 Do you use ShareFile? It’s a tool similar to Dropbox and allows you to store and share files of all types with others or on the Web. If you do use ShareFile, you’ll love their Power Tools desktop widget. It is great for uploading and downloading files to and from your account, as well as deleting files – all via drag-and-drop. This widget can be used on both Windows and Mac computers. 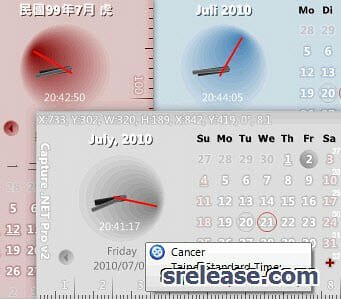 This multi-functional gadget includes many useful tools like: screen capturing, image editing, post-it notes, a desktop clock and calendar, reminders, magnifier, converter and much more. As the name implies, you’ll need to have the .NET Framework (4.0 or higher) installed to use this widget. If you’re looking for a similar dictionary widget, try Dictionary .NET.

Rainmeter is an all-in-one desktop customization toolkit for windows. You can use it to display “customizable skins” (pretty much like widgets) such as: memory and battery usage, sticky notes, a mini media player, RSS feeds, weather information and more – right on your desktop. With Rainmeter, you can really change-up the look of your desktop, all while adding valuable tools to boost productivity.

XWidget is very similar to Rainmeter, but lighter and simpler. It’s a desktop customization platform that is low on resources and fast in speed. You can add all types of widgets and even create your own. If the setup looks familiar to you, that’s because it’s based on the Mac’s widget dashboard. XWidget is great for keeping useful information handy without sacrificing CPU usage. 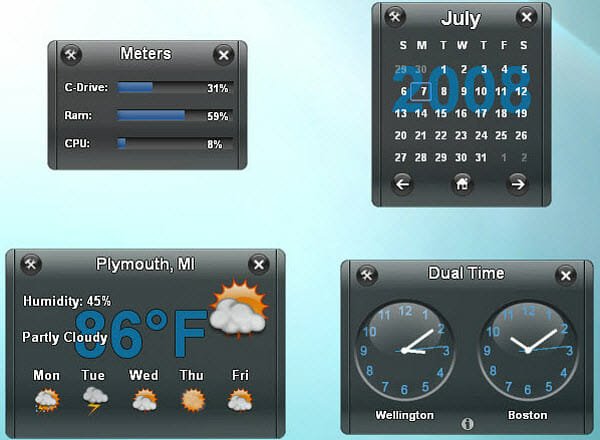 Whether you’re looking to add objects (live data or images), widgets, or gadgets to your Windows desktop, you can do it all with DesktopX. This advanced tool makes the Windows desktop object-oriented and enables you to create a totally new, custom desktop. Although there’s a large gallery of widgets to choose from, you can also create your own and share them publicly. There are hundreds of widget and gadget possibilities that you can come up with using DesktopX.

If you’re still using the Windows sidebar, you may want to try these sidebar gadgets:

What is your favorite widget or gadget for Windows?